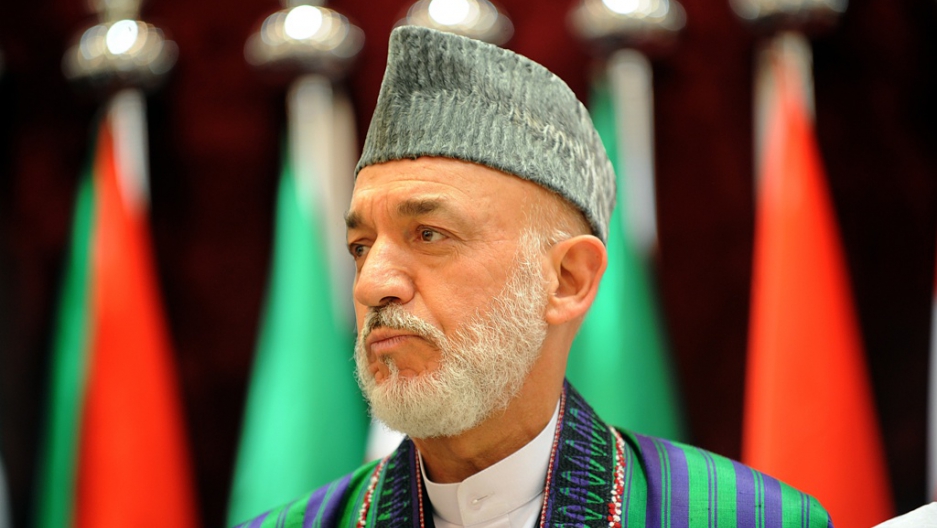 KABUL, Afghanistan — A Toyota Land Cruiser sat on the street outside Haji Mohammed Mohaqiq's house, its windows missing, tires punctured, and the hood badly dented. He said his bodyguards had been ambushed by insurgents while driving in a province bordering Kabul.

He was nowhere near the SUV at the time of the attack and was adamant he does not fear for his life, despite the long list of enemies he has made while becoming one of Afghanistan's most powerful men.

"For several hours my boys were fighting with them," he said. "Of course there is a place for concerns, but personally I have none."

Mohaqiq is a notorious warlord turned member of parliament who is an old adversary of the Taliban and a vocal critic of the government here.

More from GlobalPost: North Waziristan: The problem no one wants to talk about

With President Hamid Karzai constitutionally prevented from standing in the 2014 election, and all foreign combat troops due to withdraw later that same year, he is emerging as a key figure in the imminent battle for control of Afghanistan.

Officially, a new democratic era will be ushered in just as the occupation ends, but many people worry a power vacuum will emerge instead, leaving political rivals to fight it out as the Taliban closes in on Kabul.

Mohaqiq knows all too well what can happen under such circumstances. He resisted the Soviets in the 1980s and took part in the civil war between rival guerrilla factions that followed.

He was later a leader of the Northern Alliance, a loose coalition of former mujahideen. But Human Rights Watch accused fighters from his militia of "widespread looting and violence" in the months during and after the US invasion that overthrew the Taliban regime.

Last year he then helped launch the National Front, whose founders say Karzai broke backroom promises he made to some of them when they endorsed his 2009 re-election campaign. These allegedly included an agreement to give greater independence to local authorities.

For Mohaqiq — a Shiite Muslim and ethnic Hazara — the current administration and the militants trying to bring it down represent a joint threat to the nation's hopes of finding peace once NATO withdraws.

Before his bodyguards were ambushed, gunmen opened fire on him in the normally stable province of Bamiyan. That prompted him to fly back home and miss the second attack. The first attempt on his life was, he claimed, the work of government forces.

"There are lots of thoughts that if Karzai cannot keep power then he will make a deal with the Taliban," he said.

"If the Taliban do not come into a corner with him, then Karzai will run away and leave the country to the Taliban and then absolutely there will be a civil war."

The National Front has found encouragement from a handful of US Congress members, who met its leaders in Germany in January and see it as a bulwark against the insurgency and administrative corruption in Kabul.

Dana Rohrabacher, a Republican, was subsequently denied entry into Afghanistan for supporting the party and echoing its demand that a federalist system be created here.

Among the Afghan public, however, there is deep suspicion of Mohaqiq and the other figures likely to have major roles in the 2014 election.

All the main political movements now emerging in opposition to the government are run by men associated in some way with the bloodshed of the past and who are also bitter enemies of the Taliban.

Meanwhile, Karzai is rumored to be grooming one of his brothers, Qayum, to stand against them and maintain his family’s controversial grip on power. This raises the prospect of unrest growing at a time when NATO departs, with powerful rivals seeking to exploit social tensions.

Najibullah Kabuli is an anti-Iran activist and owner of Imroz TV, a private television station. He claims to have left the National Front after discovering it hoped to formally partition Afghanistan along ethnic lines. He told GlobalPost he has since received "lots of threats" and wants the international community to safeguard the 2014 vote.

"Whether the election result is positive or negative, a number of people here will not accept it because these kinds of men have been raised up in fighting, they have fed themselves from fighting and it is always their habit to seek benefit from war," he said.

More from GlobalPost: Afghan schoolgirls caught in the crossfire

Mohaqiq denies Kabuli was a party member, calling him "a pimp" who has been "raised by Karzai." But the National Front again encountered trouble when the government claimed fighters loyal to another of its co-founders, General Abdul Rashid Dostum, were interfering in oil exploration work by a Chinese company.

Human rights groups have repeatedly accused Dostum and his militia of abuses ranging from the rape of women during the civil war to the slaughter of Taliban prisoners during the US invasion.

Preparations are already under way for 2014 as Afghanistan’s power brokers maneuver into position and attempt to undermine each other. Although the disputes are relatively low-key now, history shows how quickly tensions here can turn violent when so much is at stake.

Allegations of massive fraud plagued previous elections, but NATO’s presence may well have kept the country from the brink of disaster. Not everyone is convinced a catastrophe will be averted next time.

“In Afghanistan if someone loses he does not have the morals to accept that and congratulate the man who won,” said Mohammed Younus Fakor, a Kabul-based political analyst.

“If we do not have a transparent election, then again I think it will be the start of war.”