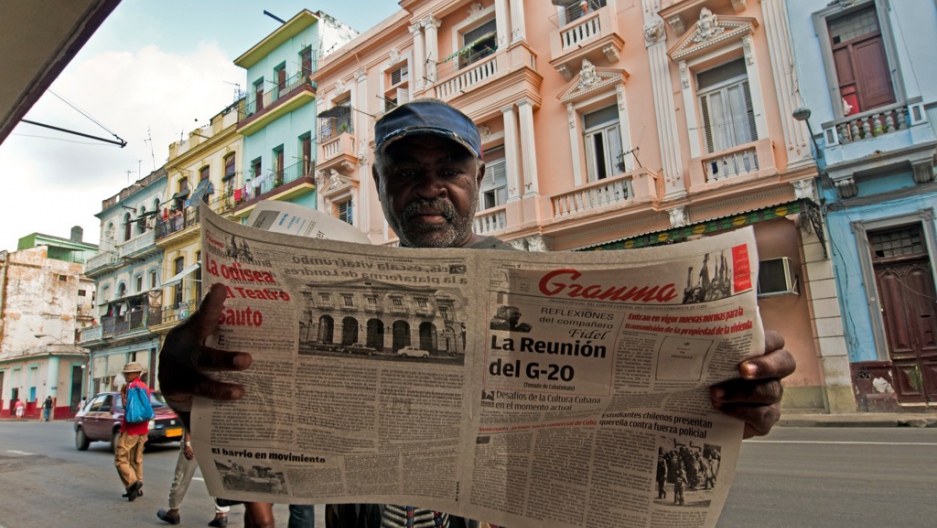 A Cuban reads the Granma newspaper announcing the new housing law, on Nov. 3, 2011 in Havana. The law allows citizens to buy and sell homes for the first time in 50 years.
Credit: STR
Share

HAVANA, Cuba — Often in the pages of Granma, the red-and-black-inked Communist Party newspaper that is a daily presence in Cuban life, there is a standard sort of feature article about the island’s economic troubles.

Sometimes it’s a story about bread. Other times bus service, or tires, or the sugar harvest. But the theme is generally the same: workers at a Cuban state-run company struggling to meet production quotas and public demand because of supply shortages, broken equipment and a “lack of discipline.”

In one recent edition of Granma, the story was sanitary napkins.

“Since 2004, investments have been made in national sanitary napkin production to improve quality,” the Granma article explained. “In addition to increasing production capacity at different plants around the country, their physical attributes have been perfected, incorporating ergonomic wings, and starting in 2008, super-absorbent material.”

“But frequent complaints about the lack of adhesive on their wings and a lack of padding have led many to think that the investment hasn’t produced the desired result.”

Once again, it was a window into an economy still at great pains to produce basic items that were abundant on Cuban store shelves more than 50 years ago, under a different system.

More from GlobalPost: A snapshot of Cuba's economy (infographic)

After Fidel Castro’s 1959 revolution, Cuba adopted a Soviet economic model based on central planning and the elimination of most forms of private property. By the late 1960s, Castro had nationalized all businesses — down to the last shoe shine stand and ice cream cart — converting nearly every Cuban into a state employee.

Generous subsidies from Moscow kept the island’s economy afloat until 1991, when the aid was cut off by the Soviet collapse. A period of painful austerity set in that Cuba has never really recovered from.

Even as the centralized, state-run model disappeared in Eastern Europe, Cuba stuck with it. When China and Vietnam unleashed their entrepreneurs and forged ahead with “market socialism,” Cuba stayed behind.

Many see Cuba’s stubbornness as the result of a trench-mentality developed by decades of US hostility.

The US trade embargo established in 1960 — the world’s longest-running trade sanctions — has continued to squeeze Cuba’s finances, targeting foreign companies that do business with Havana for huge fines.

But what has changed in recent years is that Raul Castro now publicly acknowledges that the island’s most nagging economic problems are mainly the result of overzealous bureaucracy and excessive state control.

After taking over from his brother as president in 2006, Castro has moved slowly and tentatively along a path of economic reform that accepts a greater role for market principles and small-scale entrepreneurship.

Cubans can easily obtain business licenses now, but are limited to 181 approved trades and occupations. And in July authorities announced a pilot program that will convert 222 state-owned companies into worker-run cooperatives. The government will maintain ownership of the company’s physical property and charge rent to the cooperative, but members will determine their own hours, pay and leadership.

More from GlobalPost: In Cuba, to get rich is inglorious

Other elements of Castro’s reform measures are less popular, which may be one reason Cuban authorities seem to be moving slower than planned. The government has gradually scaled back the ration system that is a cornerstone of Cuba’s social safety net. It provides everyone — from impoverished retirees to wealthy salsa musicians — with a highly subsidized food basket that includes staples like rice, beans, eggs and sugar. Small children and the elderly are guaranteed milk and extra protein.

The monthly rations barely provide two weeks’ worth of food for an average adult. But they ensure that nobody starves.

Still, the program is a huge drag on government finances, since about 70 percent of Cuba’s food is imported. Castro has made boosting local agricultural production a priority of the reform effort, handing over 3 million acres of state-owned land to private farmers and cooperatives. But farmers still face massive red tape and restrictions on where they can sell their produce. Nor can they buy tractors, trucks or other key farming equipment without government permission.

So far the measure has not succeeded. The latest government figures show Cuba is producing less food now than it did in 2007. Food prices rose 20 percent in 2011, but most government salaries remained flat, so many Cuban families are hard-pressed to see Castro's economic reforms as an improvement.

Cuba’s leaders have insisted that the country’s abysmally low state salaries can’t rise unless economic output increases. The average state worker is paid about $20 a month, and has to supplement that income by working odd jobs on the side, often in the informal sector.

Workers in the expanding tourist sector make far more, so those jobs are coveted. Cuba is projected to draw a record 2.9 million visitors this year.

Others on the island survive on the nearly $1 billion sent back each year by Cubans living abroad.

Then there are the workers at state companies who pilfer extensively from government supplies to feed the sprawling black market, Cuba’s version of Amazon.com.

In service industries and government clerk positions, employees increasingly rely on bribes and “tips” from those desperate to cut through the country’s bureaucracy — everything from paying a phone bill to getting a bus ticket.

Even the country’s vaunted medical system is teetering, with doctors turning to such “tips” to survive, or illegally performing services in private. In schools, teachers may make ends meet by selling grades or padding test scores for a few extra pesos.

Then there is the problem of the dual currency system. Neither of the island’s currencies are traded on international exchanges, but Cubans need both to cover the basics.

Most salaries are in Cuban pesos, but there is also the Cuban convertible peso (CUC), which is used in the tourist sector and at state stores that sell imported goods.

Need to buy gasoline, or imported medicine, or diapers? That’s in CUC. So are cell phone rates: at nearly $0.50 per minute, they are some of the highest in the world.

Items sold in pesos — like sanitary napkins — tend to be domestically produced but perpetually scarce. And as a result of the shortages, locals tend to hoard them, buying them at subsidized prices for resale on the black market later. Which further fuels the scarcity.

Government stores that sell imported goods in CUC typically mark them up 200 percent or more. A Samsung flat-screen television that might cost $450 in Panama or Miami sells here for $900 in a government store, or $650 on the black market.

Authorities defend the prices as a mechanism to redistribute wealth and hold together the island’s fraying social safety net. But many see the prices as an abuse, since essential goods are often only available at such stores, leaving the most economically vulnerable residents with no other option.

Managing Cuba’s increasing inequality will be a major test for Castro and the Communist Party as the reforms move forward. So far they have tried to do so largely by preventing ambitious Cubans from growing their businesses too much or becoming too successful. But economists say a shift in mentality is long overdue, and the trick is to free up Cuba’s entrepreneurs and let them haul the rest of the economy out of the ditch.