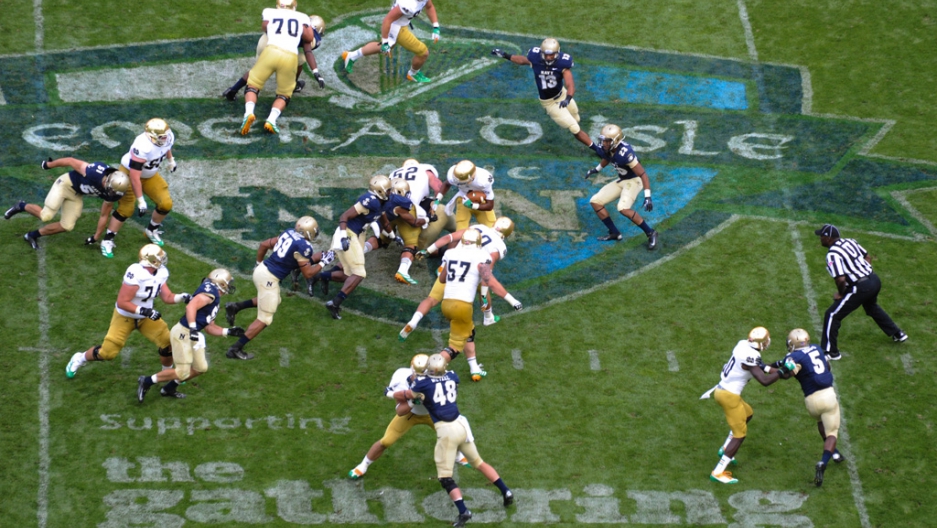 Despite being surrounded by it, there was no luck of the Irish needed.

The “Emerald Isle Classic” returned to Ireland for the first time since 1996.

More than 49,000 fans packed Aviva Stadium to watch the storied rivals, although 35,000 of those are said to be American tourists.

Not since Dublin hosted golf’s Ryder Cup in 2006 has the city’s airport been this busy, The Independent reported.

Twenty-five private jets landed and 65 scheduled or chartered flights ferried 15,000 US visitors to Dublin ahead of the game.

“It is not the most jets we had – the Ryder Cup was – but this is a close second,” airport representative Siobhan Moore said.

Thousands of those tourists will stay in Ireland after the game, generating an estimated 100 million euros in economic spin-offs, The Irish Times said.

“It is really exciting to be here to get to play in such a beautifully stadium; to be welcomed into Ireland with open arms,” Navy senior Bo Snelson told the Times. “I have been really fortunate to play in some exciting venues but this one is definitely the most exciting. We are looking to come out here and handle our business.”

Of course, he said that before the game.

Notre Dame’s Theo Riddick ran for 107 yards on 19 carries while George Atkinson tallied 99 yards on nine carries in a game that was over before halftime.

The Navy-Notre Dame game is one of college football’s oldest rivalries, but it might be the friendliest, too.

The Second World War stole most of Notre Dame’s men for the war effort, leaving the school at the brink of bankruptcy.

Navy stepped in and stationed a training facility at the South Bend, Indiana school.

“Without the Navy during the war, this institution would have gotten down to a few hundred students,” former Notre Dame president Reverend Theodore Hesburgh once said. “Instead of that, we were almost twice our normal size, and we were able to contribute something to the Navy.”