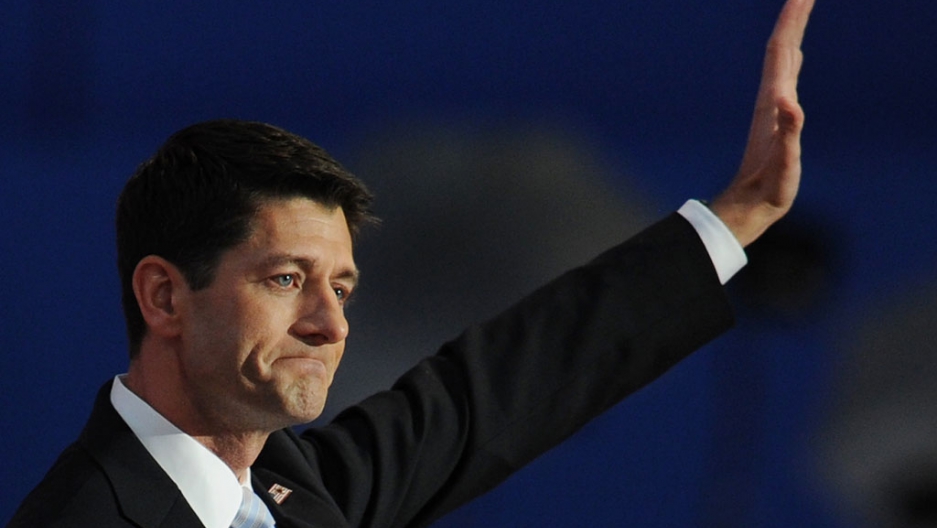 The Texas delegation jumped to their feet so often they looked like cowboy-hatted jacks-in-the-box, as they expressed their delight in their new champion.

“Wherever men and women rise up for their own freedom, they will know that the American president is on their side!” bellowed the 42-year-old candidate. “Instead of managing American decline, leaving allies to doubt us and adversaries to test us, we will act in the conviction that the United States is still the greatest force for peace and liberty that this world has ever known!”

It was an impressive performance.

But Ryan was preaching to the converted — a public primed to love and accept him. His speech Wednesday, while rousing, boiled down to a stunning triumph of form over substance.

The Republican Party’s nominee for vice president is undeniably attractive, with his aw-shucks smile and down-home demeanor. He is everything the main candidate, Mitt Romney is not — he is a man of the people, with a hard-luck story. A self-created success who still seems like the guy from down the street.

But Ryan’s speech veered from empty rhetoric to outright distortion, with little in between.

Ryan focused much of his speech on Medicare — no accident in Florida, the Sunshine State and home to many of the nation’s senior citizens. The new VP nominee has transformed himself into a champion of health care for the elderly, while attacking the president for trying to gut the program.

“The greatest threat to Medicare is Obamacare, and we're going to stop it,” he said, stating, yet again, that Barack Obama is trying to take $716 billion from Medicare to put into providing affordable health care for millions of Americans.

“Medicare is a promise, and we will honor it,” he said. “A Romney-Ryan administration will protect and strengthen Medicare, for my Mom's generation, for my generation, and for my kids and yours. So our opponents can consider themselves on notice ... Mitt Romney and I know the difference between protecting a program, and raiding it.”

This posturing is a bit brazen, since Ryan’s eponymous budget had the “entitlement” programs in its sights from the get-go. Ryan wanted to balance the budget by privatizing social security and transforming Medicare into a voucher program, a scheme that many experts say would result ultimately in higher costs for seniors.

Ryan also attacked Obama’s economic record, the president’s most vulnerable spot and an area in which Ryan’s policy wonk background should come in handy. He criticized the stimulus package — and said the public had been cheated.

“It cost $831 billion — the largest one-time expenditure ever by our federal government … The stimulus was a case of political patronage, corporate welfare, and cronyism at their worst … What did the taxpayers get out of the Obama stimulus? More debt.”

In fact, most Americans got a tax cut out of the stimulus package, and the economy has been growing, albeit slowly. Ryan salted his speech with numerous other distortions that will keep fact checkers busy for weeks.

This being a particularly nasty campaign, Ryan could not resist a veiled dig at Obama’s supposed socialist tendencies:

“That's freedom,” he said of economic risk and the American Dream. “And I'll take it any day over the supervision and sanctimony of the central planners.”

Central planning is a major facet of communist economics, and, for those who remember the old days, is almost synonymous with the Soviet Union.

Ryan did have some great phrases, as when he discussed unemployment among the young:

“College graduates should not have to live out their 20s in their childhood bedrooms, staring up at fading Obama posters and wondering when they can move out and get going with life,” he said.

The crowd went wild when they realized they finally had a candidate who could tell a joke, while emphasizing the generational difference between himself and Mitt Romney: “There are the songs on his iPod, which I've heard on the campaign bus and on many hotel elevators,” said Ryan. “I said, I hope it's not a deal-breaker Mitt, but my playlist starts with AC/DC, and ends with Zeppelin.”

Ryan, as the No. 2, has little to offer but support to the presidential candidate. His job now is to be a rousing speaker who can wave the flag for the Republican Party.

That he did, and then some, sounding a little bit like the ghost of Jack Kennedy.

What the speech lacked in substance, it more than made up for in sparkle. That, according to Tampa resident Laura Vickers, is the danger of Paul Ryan.

“Ryan appears more a man of the people, someone you can relate to,” said the retired homemaker, who spent Wednesday protesting on the streets of Tampa. “But he is actually more radical than Romney. He is a perfect running mate, and a fine partner for Todd Akin.”

Vickers was referring to the Missouri congressman who started a firestorm last week by saying that women rarely became pregnant after “legitimate” rape.

Ryan has co-sponsored bills with Akin seeking to narrow the definition of rape and thereby close loopholes allowing rape victims to seek abortions.

Ryan’s harsh stance on abortion and rape may have been the reason that CODEPINK, a women’s rights group, sought to disrupt the proceedings Wednesday night.

More Highway 2012: CODEPINK up against the Republican red

“GOP, hear our voice; it’s our bodies, it’s our choice,” they screamed, just as Ryan was reaching the high point of his speech.

The two women were promptly escorted out by security, but not before thousands of delegates began a counter-chant of “USA! USA!” to drown them out. Ryan continued speaking, but attention was definitely more on the drama in the balcony than on what the candidate was saying.

As one of the women was escorted past an attendant at the entrance to the hall, he reached out and took her pink banner. She tried to hold onto it, but he ripped it from her grasp and angrily wadded it into a ball. He made a threatening gesture towards the young woman, but was restrained by people next to him.

Ryan continued, and built to a rousing finish.

His final words were ones he has said before, and which seem destined to become his rallying cry.

“Let’s get this done!” he thundered, to delirious applause.

The crowd seemed to agree. What they were less sure about was what, exactly, needed to be done.

As thousands filed from the forum into a steamy Florida night, the mood was thoughtful.

A group of delegates tossed around reactions, but did not want to be interviewed.