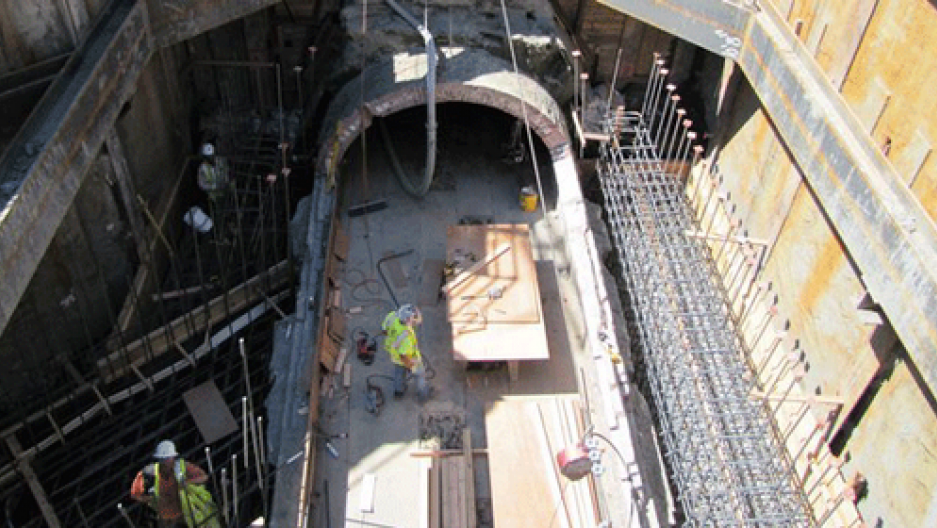 Workers restore a sewage pipe built in 1905. The wastewater running through here hovers around 65 degrees. King County wants to harness that heat energy to use in buildings. (Photo by Ashley Ahearn.)

Jessie Israel looks down into an open sewage pipe at a construction site near Discovery Park, in Washington.

Stinky water rushes beneath the construction worker's feet. But Israel doesn't think about it as stinky water.

About 350 billion kilowatt hours of energy are flushed down drains every year — in the form of warm wastewater, according to the U.S. Department of Energy.

But King County, where Israel works, hopes to be among the first in the nation to try to harness that wasted heat and use it in buildings.

"The vast majority of what's going out to the plant is water from running our laundry, the sink, it's from your shower this morning," she said. "We flush a lot of hot water, a lot of energy down the drain and you can see it right here, we're trying to figure out how to capture that and use it in buildings."

Israel sees that warm sewage water as energy. The average temperature of the water rushing through this pipe, and hundreds of miles of sewage and wastewater pipes in the county, is a pretty constant 65 degrees.

King County is looking for partners in the private sector who want to harness that heat and use it in buildings.

"We're essentially going to match-make places where we have pipes full of sewage — full of all that hot water — next to a piece of developable land, with a developer that is a deep green developer who wants to innovate and integrate new technologies," Israel said.

King County has relatively little invested in this. They're not offering to pay the contractors, merely grant them access to their pipes full of warm liquid. If they can make an agreement work, they'll be one of the first counties to do so.

And to be sure, that sewage isn't going to be flowing through your office building. Rather, it would most likely wind up in some sort of heat exchanger, and then warmed clean water would be piped through the building, like normal.

Lynn Mueller, who owns a company in Vancouver that installs systems to do just that, says it's a lot like how your refrigerator works.

"You put warm beer in the fridge, pretty soon the beer is cold and the back of your fridge is warm?" he said. "You've moved heat from that warm material in the fridge to outside of the fridge and that's basically exactly the same system — it's a heat pump."

Systems like this have been installed in Japan, China, Canada and parts of Northern Europe - and they're having an impact. One of Mueller's systems went into a building in Vancouver and lowered that building's energy consumption by 75 percent.

"We're operating at 600 percent efficiency so every dollar we spend to recover the heat out of the sewer we get $6 worth of heat out," he said.

Mueller's projecting his sales will jump from $3 million this year to $50 million next year. But wastewater energy systems won't work on all buildings.

It can be tricky to retrofit buildings that don't already have hot water heat circulating systems.

Israel says the key is to get developers of new buildings thinking about incorporating this technology early on in the design process — in order to reap big energy savings later.