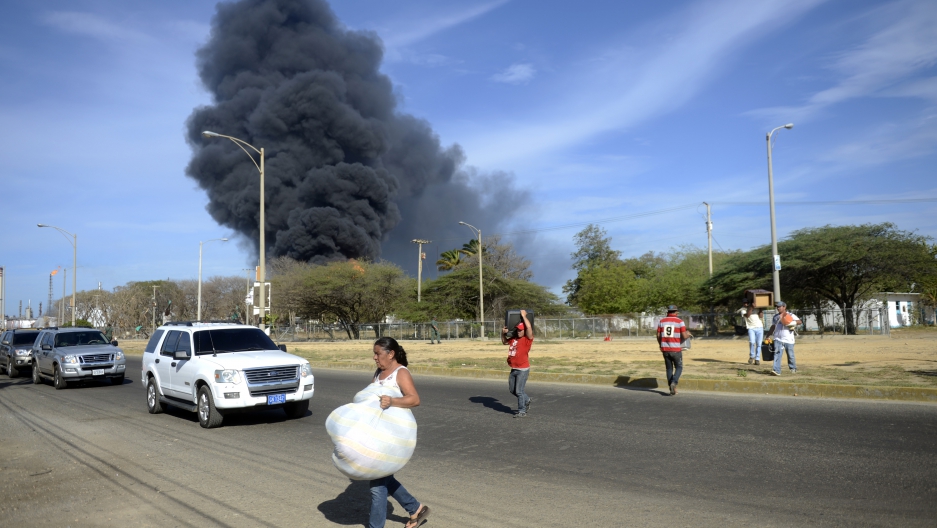 CARACAS, Venezuela — Bosses at Chevron Corp may share in the three-day mourning declared by Venezuelan President Hugo Chavez over the country’s recent oil blast at Amuay, which killed at least 48 people. The blast early Saturday morning was one of the world’s worst refinery explosions in 25 years, and the flames were only extinguished Tuesday.

Many critics of Venezuela’s self-styled socialist government have blamed Chavez for a failure to maintain the complex.

“This accident reflects a lack of investment, it should be a call of attention to authorities,” said Boris Segura, Latin America analyst at investment bank Nomura, based in New York. “In general, it speaks poorly about the state of infrastructure in Venezuela.”

While that may be small fry to the US oil and gas giant, the deal and Venezuela’s upcoming election are indicative of a bigger change in investors’ thinking. They’re all keen to invest in the world’s largest oil reserves though for years have been put off by the president’s tendency to expropriate and wide-ranging anti-business policies.

Those at Chevron are likely to be hoping for a win in October’s presidential election for Henrique Capriles Radonski, the opposition leader who would no doubt open up the country’s oil industry with talk of modeling it on that of Norway.

This week’s explosion, adds Segura, “could play into Capriles’ hands.”

Chavez would never — at least not publicly — look to a country such as Norway, which is seen as an international success story with its $600 billion oil fund, one of the largest sovereign wealth funds in the world. While not exactly hardcore capitalists, the Norwegians’ oil policies are a far cry from those of Chavez.

The socialist president is often the first and certainly among the most vocal leaders who slams capitalism and the damage it has done to his continent. Among oil companies, Chevron has one of the worst records in the region. Its dispute with Venezuelan ally Ecuador rages on, following an $18 billion fine for allegedly polluting the Amazon. And the company was scapegoated, according to most analysts, by the Brazilian government last November for the relatively small Frade oil spill off Rio de Janeiro’s coast.

However, Venezuela’s strongman has remained uncharacteristically quiet on Chevron, perhaps in a wave of pragmatism as he faces election in less than two months. Venezuela and Chevron have worked together fairly successfully during Chavez’s tenure. That’s in contrast to companies such as ExxonMobil and ConocoPhilips, which have had assets seized without, they say, sufficient compensation.

“Chevron’s excellent relationship with Venezuela is well known and this move represents more evidence of [it],” Carlos Bellorin, oil and gas analyst for IHS, a business information provider in London, said of the Chevron move. “The deal seems to give some signal of confidence to other investors in Venezuela and to the market.”

Chevron is set to take part in Venezuela’s plans for 2.5 million barrel production per day this year, 40 percent up on 2011. These heady heights require investment. “With dependence on imports rising, Venezuela is running out of dollars,” said David Rees, a Latin America analyst at Capital Economics, an economic research consultancy based in London.

“Chavez seeks to involve cash-poor … oil companies from ideologically aligned nations [and so] the deficit in investment capital becomes even harder to bridge,” added Russ Dallen, head trader at Caracas’ BBO Financial Services. He says PDVSA requires about $72 billion for the projects. “As a result, PDVSA turned to the few minority partners in the blocks with deep pockets.”

As Chavez courts those partners with deep pockets, he must do away with some of the ideology that has propped up his last two decades in Venezuela’s political limelight. “The Chevron move may be the first acknowledgement by Chavez that he will need the technology, management and capital of private and foreign firms if he is to successfully raise oil production,” said Rees. He added that Chavez will be keen to keep any opening up of the oil sector relatively low key so as to at least appear in charge. To that end, PDVSA must own 60 percent of all joint ventures.

Whatever happens in October’s election, Rees believes something will have to change. “If the government continues down the same road, then the economy would be on the road to ruin and it would only take a sharp fall in oil prices to force a sharp decrease in imports and domestic demand.”

While Capriles has said that he does not want to shock the system, many investors will see a win by him as an implicit U-turn in Venezuelan economic policy. Indeed, he has already promised to put a stop to free oil for friendly nations such as Cuba, Syria and Belarus. This could save Venezuela just under $7 billion annually.

The 40-year-old, who lags slightly behind Chavez in recent polls, is eager for more deals like that with Chevron should he win the presidency. “These types of deals are options that should be further explored to support the funding of the development plans in the oil and gas sector, which is a cornerstone of the upcoming government’s policy platform,” Capriles told GlobalPost.

Capriles has already said he aims to diversify away from Venezuela’s reliance on oil exports. “Some people say that Venezuela does not export anything other than oil because we have so much oil that it makes little sense to make anything else,” he said.

“Norway exports more oil per person than Venezuela, but also exports more non-oil goods and more services. This shows that we can develop the largest oil reserves in the world and still achieve economic diversification,” Capriles said.

Whether Capriles wins in October and pushes for reforms a la Norway, or Chavez continues to hold power, some opening in Venezuela's economy seems almost inevitable.