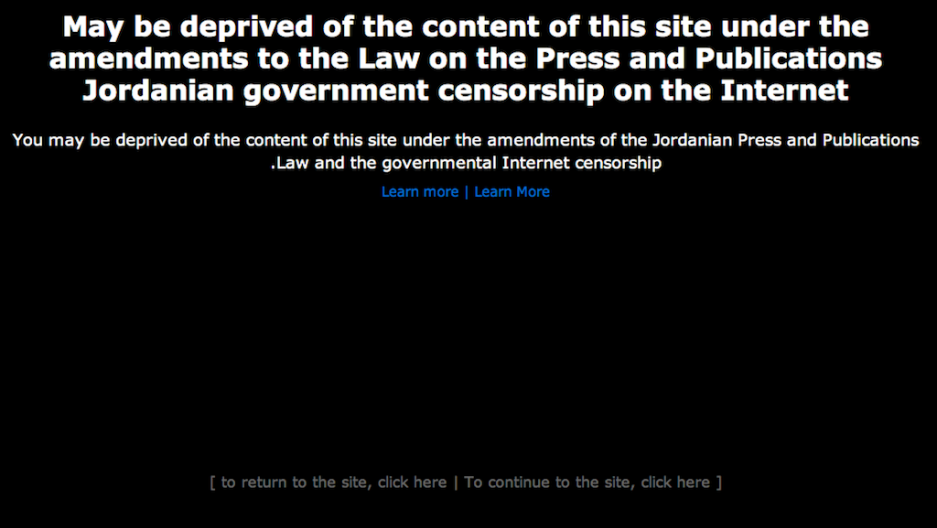 Hundreds of Jordanians posted the above message on their website to protest what they see as a new law that would restrict Internet freedom.
Credit: Screen Grab
Share

Hundreds of Jordanian websites (like this one) went dark today, posting the message:

"You may be deprived of the content of this site under the amendments of the Jordanian Press and Publications Law and the governmental Internet censorship."

This SOPA-like protest refers to an amendment currently making its way though Jordan's legislative branch. A draft of the bill was approved last week, and now Parliament has the opportunity to approve or vote down the law.

7iber Ink, a Jordanian news website, says the amendments reflect "a further decline in public freedoms" and is an attempt "to restrict the freedom of the press" in Jordan.

So far it seems the blackout is working, at least in the sense that it's garnering media attention on Twitter and from a few news outlets.

Wamda, a website that says it supports entrepreneurism in the Middle East and North Africa, citing information from an unnamed source, said "the major threats are twofold:

"First, the amendments would force every single website to register with the Journalism Syndicate, which would potentially subject it to assessment of whether it is consistent with 'Jordanian culture.'

"Secondly, the law would make website owners liable for the content posted in their comment sections. Any comment deemed offensive could incur fines some say are around 10,000 JD (US $14,000), which could immediately shut down a web-based startup."

The nexus of the protest looks to be the website 7oryanet, which according to Global Voices, roughly means "You are free, Internet."

Activists at 7oryanet claim the new laws, if ratified, will have the following consequences:

Censorship: "The law allows the head of Press and Publications to block any international website that is in violation with the law. This means non-Jordanian sites can be blocked for any reason."

Limiting freedom of speech: "The law also Censors and monitors your comments, which will be monitored and censored! Website owners will be responsible for the comments posted by citizens, thus having to censor user comments themselves. They also have to store all comments for a period of at least 6 months."

Ambiguous: "The provisions of the law are very ambiguous, it states online media, which could include based on the government's discretion: social networks, photo and video sharing sites, blogs and more."

Restrictive: "The law puts a lot of limitations on websites, which Disturbs freedom of speech, not only does it force websites to register and become members of the press association, appoint a chief editor, and pay membership fees, it allows courts to prosecute any website."