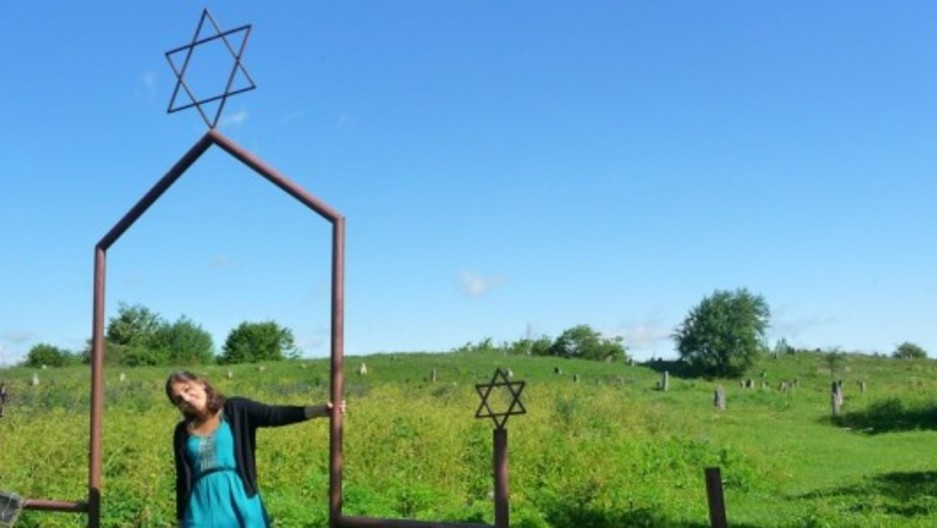 Hannah Efron stands at the gate of the old Jewish cemetery in Indur, Belarus. (Photo by Helix 2012 via Yiddishkayt.)

Forget Lonely Planet. Forget Fodor's. When Rob Adler Peckerar plans a trip to Eastern Europe he goes straight to one guidebook publisher, the Baedeker — the 1907 Baedeker to be exact.

It doesn't matter that the sites on the maps, written in German, are just a bit out of date. They show just what Peckerar is looking for.

For Peckerar, the executive director of Yiddishkayt, a non-profit Yiddish cultural organization, these guidebooks point to a past he wants young American Jews to know.

Instead of visiting concentration camps and mass graves like many conventional Jewish student tours this summer, Peckerar took eight students to the hometowns of Jewish poets and novelists. This was a tour more about life than genocide.

More than anything else, Peckerar wanted to take students back to the villages where their families came from sometimes hundreds of years ago.

"Most Jews don't know the name of the place where their family is from," Peckerar said.

What they know instead, he says, is a vague picture of shtetl life in Eastern Europe — or a musical like "Fiddler on the Roof."

Hannah Efron, a 21-year-old comparative literature major at UC Berkeley, was one of the students who went on the trip in search of her family's origins. Growing up, Efron always heard, "Oh Hannah, you're such an Efron."

"Being Efron" meant having her grandfather's sense of humor and his stubborn streak. But she never really considered where that Efron-ness originated until Peckerar helped her research the first member of her family to take Efron as a last name.

In a small Yiddish-speaking town named Amdur, in what is now Indur, Belarus, lived her ancestor, Motte Tsennes. Motte was his first name and Tsenne was his mother's name. As was the tradition, he was Motte Tsennes or Tsenne's son, Motte. Motte was the first one in the family to choose the last name Efron.

The group of students took a bus ride to what is now just a tiny village. They knew two things: Motte Tsennes was the town baker and he lived on the corner of the old market square.

The bus stopped at the old market square. The town as Efron describes it was just two streets and a smattering of houses. Peckerar, Efron and the tour guide exited the bus, and approached an old woman watering her neighbor's yard. They asked her if there were any Efrons in town.

Much to their surprise, the woman started to talk about the Jewish history of the town. The old woman told Efron that long, long ago the town was about 80 percent Jewish. Today, there were just a few remnants of Jewish life left.

The group walked down the road snapping photos. Efron said people came out of their houses to see the commotion.

They pointed the group in the direction of what was once a synagogue. During the Soviet period it had been used as a music school but had since fallen into disrepair.

"We would try and peek in the windows and it was full of garbage," Efron said.

Eventually someone in the group found an open doorway and one by one they jumped into the old synagogue.

Efron said the space was enormous. It was the main synagogue in the town; there were eight others. Walking around the enormous, empty building drove home just how big the community had been.

The group left the synagogue in search of the cemetery. Efron describes it as a wild place. Weeds and grass hid the headstones, which had turned to tiny stone nubs on the hill. Horses out to pasture wandered between the graves. A rusted gate with two Stars of David was the only real indication of what the field had been.

"I was secretly hoping in my heart of hearts that we would find a stone of Motte Tsennes," Efron said.

But she didn't find that first Efron's tombstone. But as she walked around the cemetery she felt the presence of Motte Tsennes and her family.

"I felt like my family knew that I was there to visit them, to mark them and to honor them," she said. "And they were like, 'There's our Hannah. She's going to graduate from Berkeley next year. Still no boyfriend.' That they knew I was there and I knew they were there."

Efron is back in Berkeley, hanging out at her parent's house until the school year starts. Was she changed by the trip? Yes and no. She is still, according to her family, "very Efron."

Only now she has a place to put to the name.