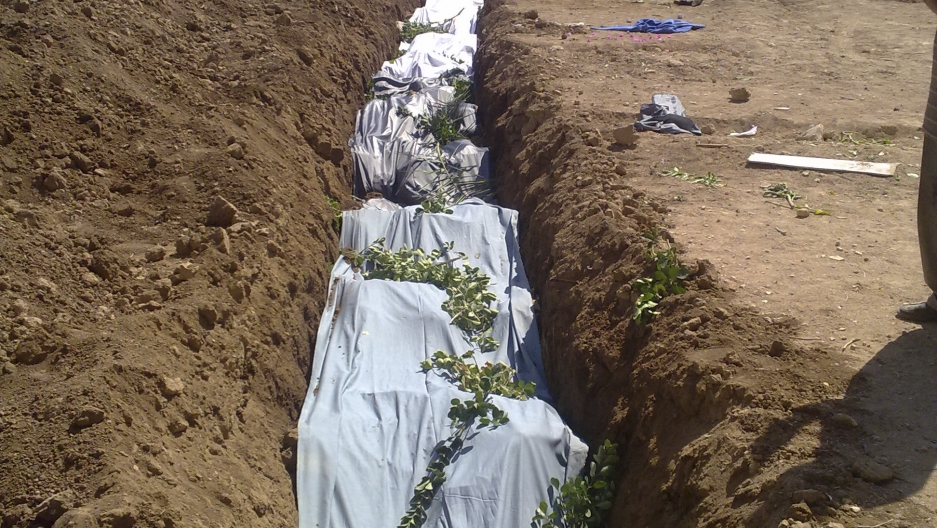 This photo, supplied by the Syrian opposition, shows the mass graves that it blames on Syrian regime executions in the city of Daraya. Other provided photos of the same location show multiple bodies. (Photo by Reuters.)

The death toll continues to rise and rise in Syria. This weekend, Syrian opposition activists accused President Bashar al-Assad’s army of mass executions in the town of Daraya, in the suburbs of Damascus.

Videos uploaded online show a grave filled with children's bodies and a basement of gun-wounded corpses. This is just the latest atrocity in weeks of violence as Assad and opposition forces battle to claim the cities of Aleppo and Damascus.

Jon Leyne, a BBC Correspondent in the Middle East, said if the death toll is confirmed, purported to be in the hundreds, it would amount to the worst single atrocity since the uprising began.

"It certainly seems to take things up a step," Leyne said. "Of course, it's very, very difficult to confirm the details. We've seen sometimes, before, where we've seen pictures of lots of bodies, we've heard reports of killing, but were not clear of the circumstances. In this case, we certainly know there's been a lot of fighting going on in that area."

Egyptian leader Mohammed Morsi was trying over the weekend to induce Iran to try and persuade Assad to back down, but Leyne said it's hard to see what common interests Iran and Egypt really have.

Morsi has spoken out strongly in support of the opposition, Leyne said, while Iran backs the Assad-led Syrian government.

"It's hard to see what's going to come of this. It's certainly an attempt, though, by President Morsi to re-assert Egypt and to develop a foreign policy, which this country hasn't had for quite a while," he said.

Joshua Landis, director of the Center for Middle East Studies at the University of Oklahoma, said the massacre over the weekend, if true, represents a serious escalation in the ongoing civil war.

"This is a bad sign for the future," he said. "It lets us know there's a very dark future in Syria. And there's still a long way for escalation."

Landis said Damascus is key to the survival of the Assad regime. Without control of Damascus, he said, it's hard to see how Assad's army can keep control of the country.

Landis said the Syrian Army is becoming something of an Alawite militia, with Sunni Muslims defecting out of the army and to the opposition. Those defectors are congregating in Damascus and Aleppo, reinforcing and fueling the fighting that's been going on there for months.

"But there are many other elements of the population. There are upper class people who don't want to be turned into a battlefield. There are minorities that are living there that are frightened of Islamic fundamentalists," Landis said. "Syria is fragmented right now. And it looks like the local population is going to be caught between these growing forces."

What's more likely, he said, is a breakdown along the lines of Lebanon, where the country falls apart along ethnic, sectarian lines.

"If Assad is thinking about saving his top generals ... his military, his everything, he's going to fight on. He's going to find a way to fal back on Alawite territories," Landis said. "Even if he can't create a state in the Alwaite regions, he can continue to be the biggest militia, with support from Iran, Russia."

That happens, he added, if the opposition remains divided, fighting amongst themselves as much as they fight him. That's also the situation that developed in Lebanon.

It took 15 years for that conflict to resolve itself.