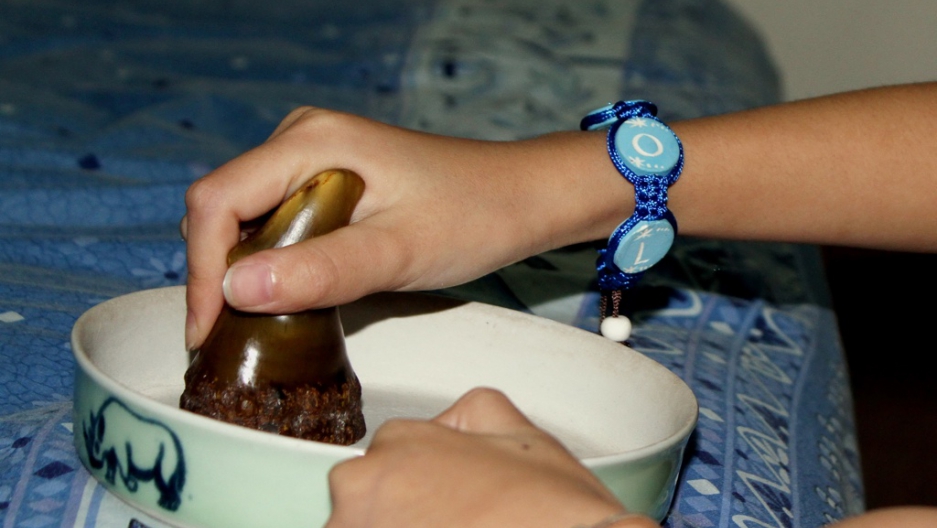 A woman grinds a rhino horn on a ceramic plate to get rhino horn powder at her home in Hanoi, Vietnam. The Vietnamese believe rhino horn can cure cancer. They also believe it can cure hangovers and its become a popular party drug.
Share

Instead of a razor blade and mirror, a roughly textured ceramic bowl is used for grinding down rhinoceros horn into a powder to be mixed with water or wine.

Rhino horn is made of keratin, the same protein as fingernails. Scientists say it has no medicinal value, and users aren’t getting high. The belief in Vietnam is that drinking a tonic made from the horn will detoxify the body after a night of heavy boozing, and prevent a hangover. One Vietnamese news website described rhino horn wine as “the alcoholic drink of millionaires.”

This is the latest twist in South Africa’s devastating rhino poaching crisis, which began with a sudden boom in illegal killings of the endangered animal in 2008 and has worsened every year since. Demand among the newly wealthy in Vietnam is the root of the problem, says TRAFFIC, the wildlife trade monitoring group.

Tom Milliken, a rhino expert with TRAFFIC who has worked extensively in Asia and Africa, said that in Vietnam, offering your friends rhino horn at a party has become a fashionable way to show wealth and status.

The way it happens is like this: “I would get my closest friends and we’d go into another room. I would bring out some rhino horn and we’d all take it and then come back into the party,” explained Milliken, who studied the phenomenon in Vietnam.

A new TRAFFIC report, co-authored by Milliken, extensively details how surging demand for horn in Vietnam, corruption in South Africa’s wildlife industry, loopholes in regulations and sophisticated criminal networks have all fed into the poaching epidemic.

Another key group of Vietnamese consumers is people with serious illnesses, in particular cancer, who believe rhino horn can cure them despite the lack of any medical evidence. The TRAFFIC report describes the disturbing phenomenon of “rhino horn touts” stalking the corridors at hospitals, seeking out desperate patients with cancer.

An update released Thursday by South Africa’s Department of Environmental Affairs said that 339 rhino have been killed illegally in the country since the start of 2012, on track to be the worst year for poaching yet.

There have also been 192 poaching-related arrests this year — also on track to surpass those of 2011.

South Africa is the primary target for poachers because it is home to 21,000 rhinos, or more than 80 percent of the world population. It is where rhinos were brought back from the brink of extinction in the 1960s, and where today they are again most threatened.

South Africa and Vietnam are beginning to cooperate on the problem, although progress has been slow.

Vietnam's deputy foreign affairs minister Le Loung Minh visited South Africa last week for talks on illegal trade in wildlife with his counterpart Ebrahim Ebrahim. The two governments are set to sign a memorandum of understanding that would encompass cooperation in criminal investigations. But it has taken a year of sporadic talks to reach this point — a sign of the lack of urgent action.

“South Africa has progressively scaled up its response to rhino crime,” the TRAFFIC report noted, pointing to a national strategic plan that is being implemented and the recent increase in “high-value arrests.”

South Africa’s environment ministry hired Mavuso Msimang as the country’s “rhino issues manager,” with the role of bringing together South Africans in the private and public sectors to find the best way to save the rhino.

The project involves studying the potential legalizing of the rhino horn trade, a contentious issue.

“The government has done a good job, warts and all, of putting their effort behind the saving of the rhino,” Msimang said at the launch of the TRAFFIC report.

“It’s got serious shortcomings, coordination is not always great, but the will to do well is with us,” he said. “There is a recognition that we should play our part to save an animal that is so beloved and yet so threatened.”