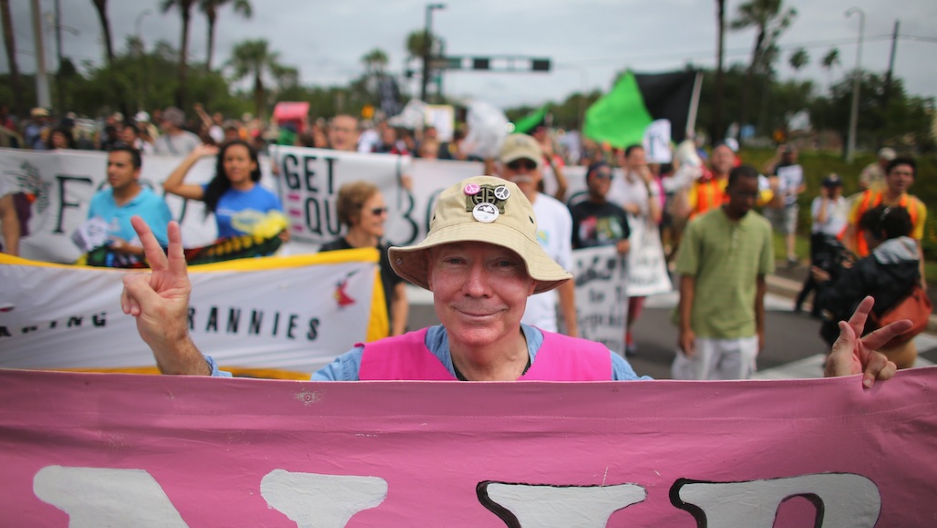 Protesters walk through the streets before the start of the Republican National Convention being held at the Tampa Bay Times Forum on August 27, 2012.
Credit: Joe Raedle
Share

Activist group Code Pink put on a colorful display of protest at the Republican National Convention Monday, arriving dressed as bright pink vaginas to speak out against the "war on women" and corporate money in politics, according to the group's website.

Reproductive rights and universal health care were among the things the women and men called for, according to video of their protest. Rae Abileah, an organizer and co-founder of Code Pink, told Tampa Bay Times: "We are in opposition to the right-wing agenda that wages war on women's bodies."

"I want to make waves here in Tampa," one vagina-clad activist told BuzzFeed. "I want the Republicans to see that there's dissent and that we're not going to stand for their rhetoric against women — most recently, Representative Akin making that comment about 'legitimate rape,'" she said.

Asked why she dressed up, the activist answered simply, "To make a scene!"

Code Pink was among some 60 groups that had planned protests for the opening day of the RNC, the Associated Press reported. However, Monday's turnout was quite modest, with rain, wind and a full police presence keeping spectators and would-be protestors at bay. Only a few hundred participants showed up for a march that had been expected to draw 5,000, according to the AP.

Cara Jennings, a voter outreach organizer from Palm Beach County, told the AP she was protesting the GOP's stance on abortion. Clad in a "pink, neck-to-knees vagina outfit decorated with sparkles," she told the AP: "The right-wing agenda is turning back time regarding women's bodies."