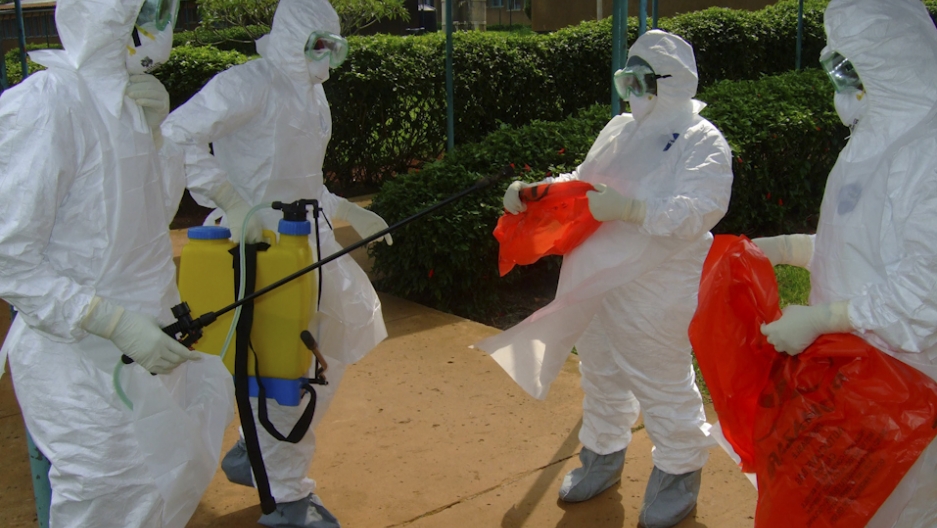 Officials from the World Health Organization wear protective clothing on July 28, 2012 as they prepare to enter Kagadi Hospital in Kibale District, about 200 kilometres from Kampala, Uganda, where an outbreak of Ebola virus started. The World Health Organization has said there is no need to panic and that everything has been done to contain the situation. In a statement yesterday,Ugandan President Museveni urged the public to desist from physical contact, such as shaking hands, in order to prevent a further spread of the disease.
Credit: ISAAC KASAMANI
Share

JOHANNESBURG, South Africa — We'd make fun of this crook, if only we didn't feel a little bad for him.

According to a report from the Sunday Monitor, a man stole a mobile phone from a patient in an isolation ward at Kagadi Hospital, in Western Uganda.

As it turns out, the patient was suffering from Ebola, one of numerous cases in a recent outbreak in Uganda. The patient later died from the hemorrhagic fever. But before dying, he reported the theft of his phone to hospital security, who began investigating.

The Monitor reported that "as police zeroed in on him, he developed symptoms similar to those of Ebola and sought medication at the hospital."

More from GlobalPost: Ebola outbreak may have spread at baby's funeral

“The suspect is admitted at Kagadi Hospital with clinical signs of Ebola," Dr. Dan Kyamanywa, the Kibaale District Health Officer, told the Monitor.

Ebola virus, which causes Ebola hemorrhagic fever, is considered one of the world's most terrifying viruses: victims tend to die bloody and painful deaths, bleeding from every orifice.

Ugandan President Yoweri Museveni warned in a televised broadcast that people should refrain from physical contact like shaking hands, casual sex and do-it-yourself burials to reduce the chance of contracting Ebola.

And from stealing cell phones, evidently.