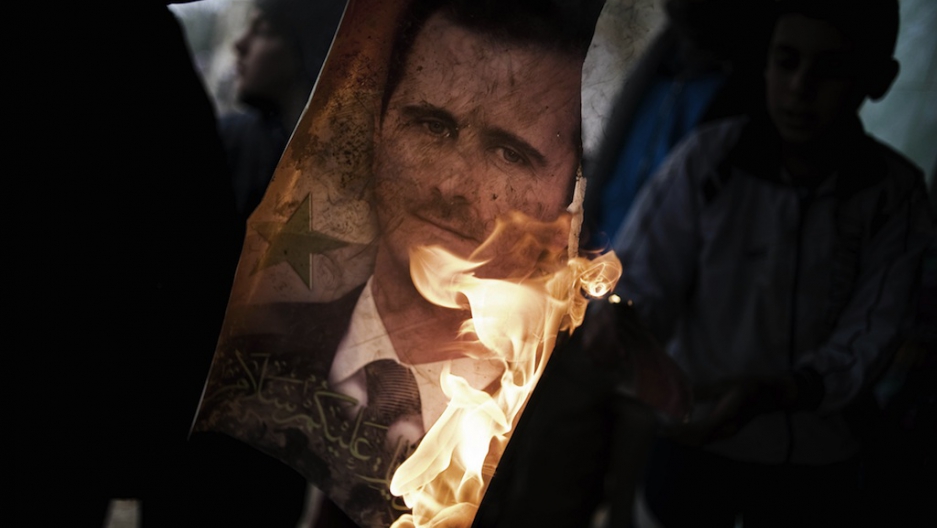 DARAYA, Syria — For its latest brutal assault, the Assad regime brought in its own cameras to document the full horror, lest any Syrians or their supporters abroad doubt the lengths it will go to keep the ruling family in power.

“I don’t know if I have enough words to describe what I’m seeing,” said Micheline Azaz, a young female reporter for Syria’s only private TV channel, Al Dunia, which is majority owned by President Bashar al-Assad’s first cousin.

"But this is what they believe in,” she added.

Behind her, the first ghoulish video image materializes: an elderly man, slumped in the driver’s seat of a blue delivery van which has skidded off the road, its windows shot through, the camera swinging in to focus on streams of blood.

The reporter Azaz said that residents here "committed criminal acts and [were] killed in the name of freedom."

The television report also accused these "terrorists" and "mercenaries" of responsibility for what appears to be the single worst atrocity of the 17-month uprising: the killing of between 300 and 600 people, most of them civilians, in a four-day assault on the opposition stronghold of Daraya, located five miles southwest of Damascus.

But those piles of dead bodies, twisted into inhuman shapes, buried beneath bright blankets, charred beyond recognition, and slumped in the streets and doorways were not killed by the rebels of the Free Syrian Army, survivors told GlobalPost.

They were killed by the forces of Maher al-Assad, the president’s brother, locals said.

“I know many peaceful people, including doctors and teachers who were killed in the last few days,” said Abu Taha, 40, who spoke with GlobalPost after fleeing with his family from Daraya on Saturday. “The Free Syrian Army fighters pulled out of Daraya today in their pickup trucks after destroying a checkpoint. The Assad regime wants to kill every Sunni in Daraya.”

Abu Taha said the Sunni-majority city, home to about 250,000 people, had been surrounded by tanks and military checkpoints since Aug. 16, and cut off from electricity since Aug. 18.

Then, three days later, the first shells of an artillery barrage flew across the ancient capital from Maher al-Assad’s Fourth Division, based high on Damascus’ Qasioun Mountain, crashing into Daraya’s cement-block homes, farms and workshops.

Five days of bombardment and airstrikes killed at least 120 people, according to the opposition Revolutionary Leadership Council of Damascus. Survivors were left trapped beneath rubble, broken and bloodied.

One such elderly lady, apparently unable to walk after surviving the onslaught and finding herself in a graveyard, was interviewed by Al Dunia’s Azaz.

“Here is a woman who is still alive,” says Azaz, moving over to the veiled lady lying on the ground, surrounded by dead bodies and watched over by soldiers, her bloodstained hands a stark contrast to the reporter’s manicured nails.

“I don’t know where my children are,” the injured woman tells Azaz. “I can’t remember anything because I was injured.”

As Azaz moves on to find her next vox pop, the Dunia report shows pictures of soldiers getting the woman, at last, onto a stretcher.

“People today try to disfigure the image of the Syrian Arab Army but you have been here and seen it, so tell us about it,” Azaz tells a terrified veiled woman, sitting in the back of a delivery truck.

“The only thing we saw from the army is that they are good,” replies the woman.

From the early months of the uprising last year, Daraya has defied Assad with mass protests.

Shot down as they bore banners calling for freedom, and with hundreds of their young activists arrested, Daraya’s community turned to arms to protect themselves and, later, to fight back.

For the past two months the regime’s local police station and intelligence branch had been abandoned, Abu Yahya, a 50-year-old shopkeeper from Daraya told GlobalPost.

Situated on the edge of Mezze Military Airport, from where the regime has been launching an increasing number of aircraft to bomb opposition areas, and with large fields and farms in which fighters can muster under cover, Daraya had become a stronghold for an estimated 3,000 FSA fighters.

Rebels in Daraya said in the past month they had launched attacks on Mezze Military Airport, bombing it with mortars and rocket-propelled grenades (RPGs), which had led to its closure for several hours. They have not yet destroyed any aircraft.

Several residents also said the FSA had attacked the airport but the claims could not be independently verified.

Abu Yahya claimed the rebels had recently attacked a checkpoint outside Daraya manned by soldiers from Maher al-Assad’s Fourth Division, killing 30 of them.

“We have enough fighters but we need ammunition and arms. We can face tanks in the street with RPGs, but how to face jet fighters with our machine guns?” Omar, a 28-year-old FSA fighter in Daraya said to GlobalPost on Friday. “We cannot fight for a long time in Daraya so we will pull out to save the civilians.”

But far from sparing the civilians, the rebels’ retreat on Saturday — as occurred previously in Homs after fighters withdrew from the neighborhood of Baba Amr — left them defenseless against the assault of Assad’s soldiers and militiamen.

“We found more than 100 dead bodies in the Abu Suleiman Derane mosque and gathered around 200 from homes and the streets to bury them in a mass grave today because the town’s graveyard is already full,” said Abu Yahya, the shopkeeper.

“The regime killed whole families from Daraya to punish us," he added.

A GlobalPost reporter visiting Daraya Sunday described it as a city of “ghosts and dead bodies,” witnessing dozens of corpses strewn amid the rubble and chaos of the devastated town, including entire families summarily executed with shots to the head and chest.

Mohammed, 35, said he lost nine cousins from the Qafaa family in the massacre, gunned down or stabbed in their homes. Among them were Issam Qafaa, 26, and Wissam Qafaa, 24, both of whom were due to be married on Friday, the day they died at the hands of government troops.

“I will kill each and every soldier and security man in my way. I will go on killing even if I have nothing to eat,” said Mohammed, chain smoking, enraged and calling relatives on his phone to break the bad news.

“The armed fighters had pulled out of the city. My cousins were killed in their homes. They were very quiet people, they didn’t even go on anti-Assad protests,” he said.

By contrast, the two young children Al Dunia’s roving war reporter found hiding in the back of a small three-wheeler van were very, very quiet.

“Here you see children still alive with their dead mother,” Azaz tells viewers, as the camera moves in to document what she calls the “storm of destruction left behind after the terrorists entered the city.”

“Who is this beside you,” asks Azaz of the little girl, who cannot be older than 5.

“My mother,” she answers back. “Do you know who did this to you,” asks the reporter, flanked by soldiers, as the child’s eyes widen in distress.

A GlobalPost reporter in Daraya, Syria contributed to this story.