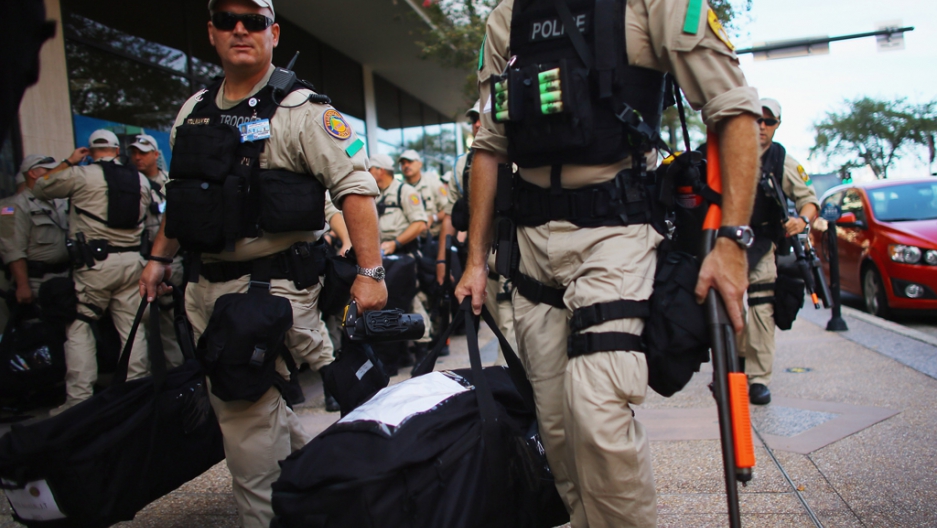 Law enforcement officers walk together as they arrive to provide security for the Republican National Convention being held at the Tampa Bay Times Forum on August 25, 2012 in Tampa, Florida. The convention starts the week of August 27th.
Credit: Joe Raedle
Share

Florida Gov. Rick Scott declared a state of emergency as Tropical Storm Isaac approached the state on Saturday, according to the Associated Press.

"We are a hospitality state. We know how to take care of people and we want to ensure their safety," said Scott, as the state prepares to host the Republican National Convention. He added that delegates were being informed on how to stay safe during the storm.

Scott said he was in communication with local, state and federal agencies, in order to prepare for the storm hitting Florida.

The AP reported that a hurricane warning has been issued for the Keys, though the storm won't hit Tampa head-on.

Isaac already hit flood-prone Haiti, according to NBC News, and is likely to hit Cuba today. Forecasters predict it will make landfall as a Category 1 hurricane during the night on Tuesday.

CBS News reported that at least three deaths in Haiti were attributed to Tropical Storm Isaac.

Around 70,000 delegates, journalists and protesters are expected to attend the Republican National Convention in Tampa, Florida next week.

NBC News noted that Florida has not been hit by a major hurricane since 2005, and officials fear complacency.

"I think the most dangerous thing is when people keep waiting to see what the next forecast is even if they’re in an evacuation zone. They say, 'Oh, it’s just a Category 1 storm or a minimum hurricane.' We’ve seen significant impacts from tropical storm force winds and rain," said Craig Fugate, administrator of the Federal Emergency Management Agency, according to NBC News.