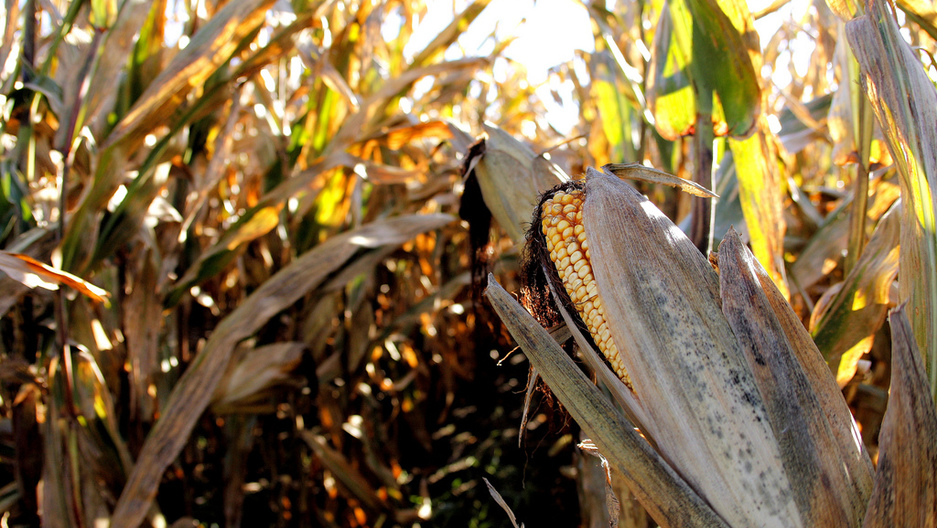 As this summer's draught continues to take its toll on farmers across the U.S., other countries may soon be feeling its effect. (Photo by Phil Roeder via Flickr CC.)

The United States government requires about 40 percent of the nation's annual corn crop be converted to ethanol — just over 13 billion gallons this year.

But as the country faces the worst drought since the 1950s, professor Yaneer Bar-Yam says the U.S. can no longer afford to turn corn into fuel.

Bar-Yam, the president of the New England Complex Systems Institute, says rising food prices contributed to recent crises around the world, including the Arab Spring. He says waiving the ethanol requirement in the U.S. could prevent food riots.

Bar-Yam says the 40 percent of corn set aside for ethanol every year equals about 16 percent of the global corn supply. That's four percent of all grains produced in the world. In comparison, ethanol makes up just one percent of energy consumption in the U.S, Bar-Yam says.

But things weren't always the way the are now. Bar-Yam says ethanol production has become a priority for the U.S. in the past seven or eight years. That's caused the price of corn — and food in general — to increase by a factor of two. The effects have been global in reach.

"Particularly poor people around the world that are depended upon grain ... have been impacted directly by this corn-to-ethanol conversion in a very dramatic way," Bar-Yam said.

And that was before the drought hit. Bar-Yam says the drought has caused corn prices to rise 60 percent over the last few weeks. Wheat has gone up 40 percent.

"That's going to have a very big impact in the short term," Bar-Yam said.

He points to the global food riots in 2008 and the Arab Spring as examples of what high food prices can lead to: "desperation that causes severe social unrest and revolutions."

"Right now we're facing the possibility, in fact the likelihood, of a third price peak," he said. "It's going to be worse than the other two."

To avoid future global unrest, Bar-Yam says the U.S. government should reduce the ethanol mandate by at least half this year to help boost the world's food supply.

Bar-Yam admits its not an easy decision to make in the middle of an election year. Iowa, the largest ethanol-producer in the country, is also a swing state. Farmers there make more money as a result of the ethanol mandate than they would otherwise. But Bar-Yam says self-interest has no place in today's world.

"If we are concerned only about our own interests, we will suffer the consequences because our world is a connected world and we are all involved in the same system," he said.