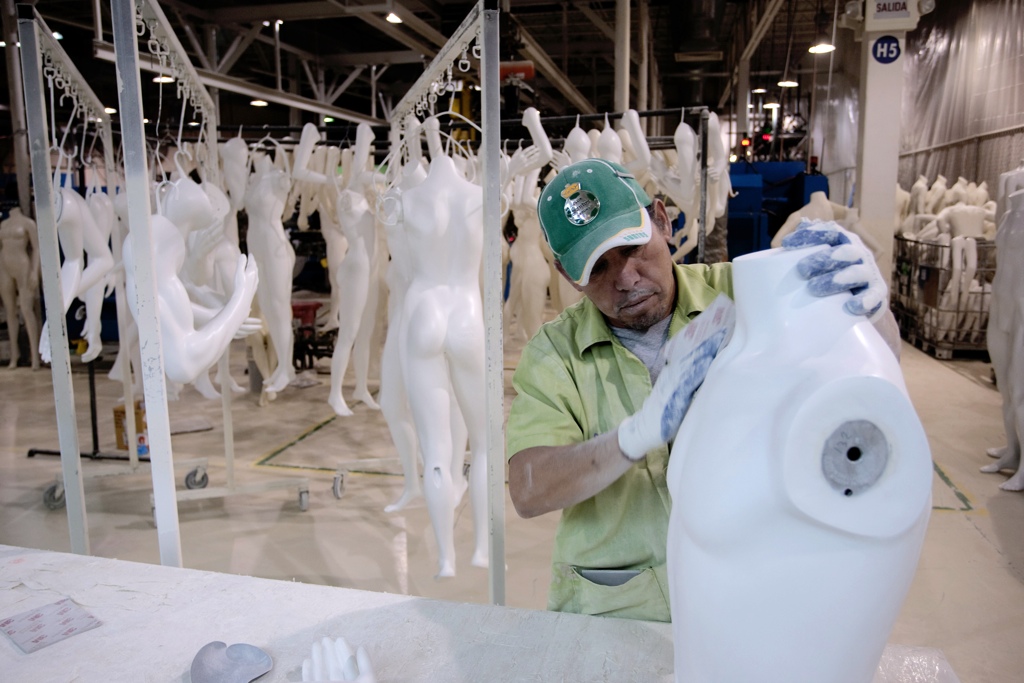 A worker builds a mannequin in a factory in Ciudad Juarez. Drug war violence made Juarez a deadly city but multinationals are still booming there.
Credit: Jesus Alcazar
Share

CUIDAD JUAREZ, Mexico — Martha Messina, an economic development specialist, waits at the security gate of an India-style call center in this city across the border from Texas.

She says that the company, Genpact, and others like it are thriving in northern Mexico’s Ciudad Juarez. That’s right, Juarez — the same place that at one time seemed to be ground zero for Mexico’s brutal cartel war.

“There’s a lot of life in the businesses here, but [people] only talk about the negative,” Messina says.

More than 10,500 killings since 2008 in Juarez — a city of about 1.3 million people — made it one of the deadliest cities in the world. The murder rate has fallen substantially since 2010, according to Chihuahua state figures, but the bad reputation is not likely to fade fast.

Juarez, however, is not an economic ghost town.

Multinationals Johnson & Johnson, Delphi, Siemens and Foxconn all have major manufacturing operations here. McDonald’s, Chili’s, Arby’s and other chains have opened up restaurants, catering to the working population.

Even as Mexico’s cartels smuggle drugs across the US border and local turf-battling gangs prey on small business owners, big companies and factories continue to expand their operations. Major businesses, including multinationals and outsourcing offices, appear unthreatened by the drug war violence. It’s an uncomfortable coexistence. Now as the killings have slowed in recent months, local executives hope the city’s economy will have a chance to flourish.

That’s part of a complex story in Mexico, Latin America’s second-largest economy, after Brazil. Some 60,000 people have been killed in Mexico in cartel-related violence since late 2006, according to local media reports. Despite the frequent news of dismembered bodies dumped roadside, Mexico’s economy continues to grow. It might even nab that No. 1 spot from Brazil by 2022, the bank Nomura predicts.

In 2010, a peak year in Juarez’s violence, more than 3,000 people were killed here — but the city’s export sector increased jobs and output. In 2011, trade between Juarez and El Paso, its sister city on the Texas side of the river, totaled more than $80 billion, up by more than $10 billion from the previous year.

That upward trend has spurred employment growth that, if other conditions like safety were improved, would make it the envy of many towns on the US side of the border. The number of export sector jobs jumped from 166,000 in June 2009 to 215,000 in June 2012, an increase of nearly 30 percent.

More from GlobalPost: A Mexican union dismantled, with gruesome results

Take Infolink, which handles product support for US software companies. It tripled its workforce here last year and now employs 115 English-speaking engineers and customer support specialists in its Juarez office.

On a larger scale, Affiliated Computer Services Inc., or ACS, a business process outsourcing company, now employs 3,000 people in Juarez. They process and shuttle 16,000 pounds of documents back and forth across the US border in vans every day, says ACS senior executive Miguel Hidalgo.

When a visitor drives up to ACS, a guard at the front gate checks the trunk of the car. A sign reads, “Warning: This facility is protected by closed circuit TV.”

Inside the protected corporate campus, employees mostly in their 20s, wearing stylish T-shirts and new sneakers, are busy at work. One, with menacing neck tattoos, at first seems like a tough young man. Then he speaks.

“Sir, what I’m going to need you to do is go ahead and click,” he tells a client calmly over a headset microphone — in an impeccable Midwestern American accent.

Companies such as ACS and Infolink are largely removed from the Juarez portrayed in the gruesome headlines of recent years.

Organized crime groups tend not to kidnap big company executives or hijack their vehicles in Juarez, business leaders and security analysts say. They add that, although the character of crime can vary depending on the town and on the gang that rules there, major corporations stay out of the fray in much of the country.

“They are able to keep the violence at bay for their particular business and workers,” says Shannon O’Neil, a Mexico expert at the Council on Foreign Relations, a New York-based think tank.

Gonzalez, one of Mexico’s most prominent businessmen, agrees. “The criminals don’t go after the big businesses,” he tells GlobalPost.

Local officials attribute this partly to the companies’ ramping up their own private security measures. “They have always had security, but there’s more security now because of the violence,” says Maria Soledad Maynez, head of Juarez’s economic development agency.

That’s not to say Mexico never sees crimes against big companies. In late May and early June of 2012, a brazen series of arson attacks on trucks owned by Sabritas, a local snack food subsidiary of PepsiCo, drew a great deal of attention — partly because it had broken the status quo. The fires, which occurred far from the border in Michoacan, were allegedly carried out by a hyper-violent splinter group of cartel gunmen.

“The attacks on the Sabritas potato chip trucks kind of threw people for a loop precisely because the cartels had never gone after a big company like that, and especially not a subsidiary of a such a huge US company,” says Sylvia Longmire, a security analyst and expert on Mexico’s organized crime.

Yet even with the threat of such violent incidents, businesses keep their operations running in Juarez. The benefits must outweigh the risks. The city serves as a connection point between low-wage laborers — a data-entry clerk can earn $500 per month, an assembly-line worker, much less — and multinational corporations.

“When I came here, I knew that Juarez is not Mexico, and it’s not the United States either,” says Hidalgo, the executive at ACS. “It’s the border, ‘la frontera.’”

Messina, the federal economic development expert, gets in her car and locks the door before revving up. “For safety,” she says, and drives off from Genpact’s security fence.

Juarez’s main roads are smooth and wide, and lined with billboards advertising international chains such as Office Max and Starbucks.

The town is also dotted with failed businesses. Messina drives past a gutted shop called “Chalet Mr. Tuxedo.” The building, now a shell of crumbling walls with no roof, still has a sign in Spanish on the chipped paint of its facade. “Renting all types of tuxedos,” the sign says.

That’s just one of thousands of small businesses in Juarez that have shuttered in the past three years.

Small businesses here cover their windows with thick metal grates — scant protection from the cartel war and crimes associated with it.

“It's pretty simple. The cartels go after the small guys because they're so much easier to intimidate,” Longmire says.

Noelia Covarrubias helps run Burritos Sarita, a lunch van in the center of Juarez. For small business owners “extortion is the biggest fear,” she says, stepping down from the van to talk.

Local business leaders and politicians are intent on promoting a more positive side of the city.

“In Juarez we have the best labor force in the world,” he says.

Yet deep problems persist: Thousands of young people are out of work, despite the expanding exports and outsourcing industries. Like other developing world economies, Juarez is experiencing a skills mismatch: low education levels mean many of the city’s young people are not hirable in the tech-heavy, English-speaking offices of the thriving sectors.

“We have programs in place [to help],” Murguia says. “But it’s insufficient, it’s like an aspirin for cancer.”

Nevertheless, he acknowledges, “Juarez continues to be a magnet for investment.”