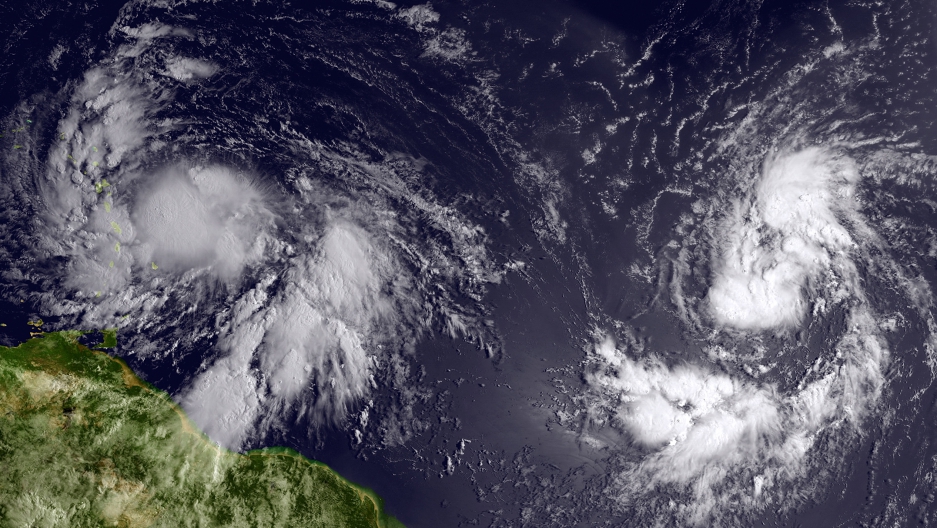 WASHINGTON, DC — Evacuation plans are under way at the US Naval Station Guantanamo Bay as Tropical Storm Isaac spins toward Cuba. But the nearly 200 prisoners suspected of plotting terrorist attacks against the United States are staying put.

All nonessential personnel, including the more than 150 journalists, attorneys, human rights advocates and families of the 9/11 victims who went to observe the proceedings were evacuated this afternoon, according to Andrea Prasow, a lawyer with Human Rights Watch. Detainees and military personnel will remain on the island in facilities designed to withstand hurricane-strength winds.

The US military on Wednesday postponed the preliminary hearings for alleged 9/11 mastermind Khalid Sheikh Mohammed and four others being held at Guantanamo Bay, Cuba.

More from GlobalPost: KSM will get his day in court

Isaac is expected to swell into a hurricane and slam eastern Cuba, where the naval installation is located, by Friday, according to the Miami-based National Hurricane Center.

Navy spokesman Robert Durand declined to reveal the specific measures the military was taking to secure the 168 prisoners and roughly 6,000 personnel at the facility. But he told reporters during a press briefing that 85 percent of the detainees live in "brick-and-mortar structures capable of withstanding hurricane-force winds."

Shamsi came to the detention center to argue the ACLU’s motion that opposes a government request to censor some of the defendants’ statements about their treatment in custody. The court was also scheduled to hear a similar motion from 14 news organizations that challenged the government’s request for secrecy on First Amendment grounds.

This is the second disruption in the case. Earlier this week, Pohl agreed to postpone the hearings for 24 hours after a freight train derailment near Baltimore damaged fiber-optic cables and cut off internet service to the base.

In April, the five men were charged with terrorism, hijacking aircraft, conspiracy and murder for allegedly planning and executing the 9/11 attacks. Officials don't expect the actual trial to begin until mid-2013.

The defendants are held at Camp 7, which is located in a classified location on the base and houses 16 "high-value" detainees who were transferred to the base from CIA custody. Camp 7 is one of the buildings constructed to withstand hurricane-like conditions.

Earlier this summer, the advocacy organization Human Rights Watch released a report criticizing the "inhumane conditions that prevail in many of the camps," including Camp 7. The group singled out that particular compound, noting that while "little information" is available, "conditions at Camp 7 are even more restrictive" than those elsewhere in the detention center.

In February, the lawyers representing the five defendants sent a letter raising concerns about the mistreatment of their clients to the top detainee policy official at the Pentagon, The New York Times reported. The Pentagon denied the charges.