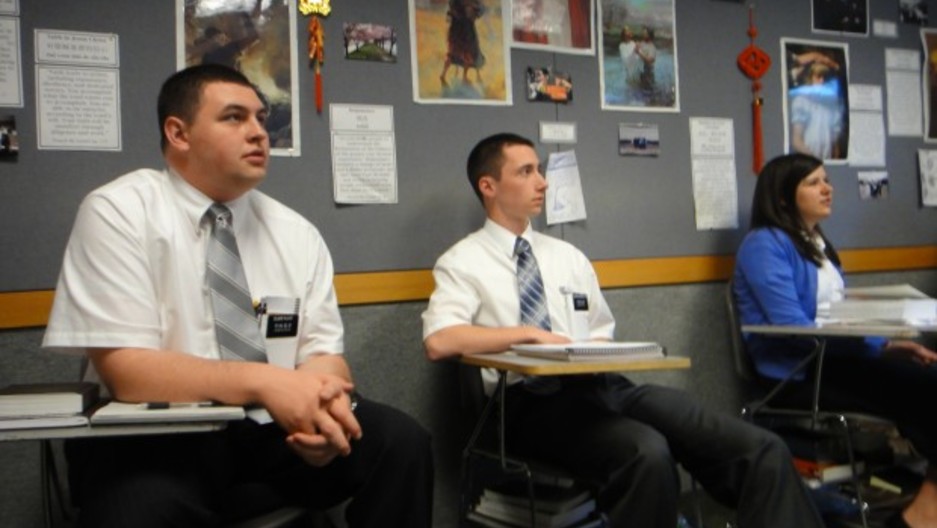 Some call it the Mormon moment, even the Mitt Romney effect.

Whatever you call it, Mormons around the United States say they have never been asked so many questions about their faith, and especially about their experiences serving missions.

But lately, everybody has been asking Jason Wright about his mission to Brazil — even though he returned 20 years ago.

"Probably the most frequent question is 'Why? And did they make you?''" Wright said.

Members of the Church of Jesus Christ of the Latter Days Saints (LDS) are not required to go on mission. But if they apply, Church authorities in Salt Lake City decide where they will go.

"When I explain that serving a mission for the LDS Church is not mandatory, they want to know why in the world you would do it," Wright said. "They just repeat that question when they find out that you don't go to school. You don't communicate with home much during that time. You don't date, see movies, go swimming or participate in the world much during that two-year period of time. And you pay your own way, by the way."

For Wright, who's now an author and political commentator living in Virginia, it was not an easy decision.

"I was turning off what for most 18- and 19-year-old men is one of the most exciting and adventurous times of your life," he said. "I was turning all that off to go serve the Lord in this foreign land."

It's a decision that Mormon young people continue to make.

Every week, about 400 new missionaries arrive at the Mission Training Center in Provo, Utah, already wearing their signature white shirts and ties. This is where two-thirds of all Mormon missionaries start their journey. They have just a couple minutes to say goodbye to their families at the curb. In most cases, they won't see them again until they return from their missions.

"It is a very big day," said Spencer Christensen, a manager at the Mission Training Center. "This has been anticipated for months and months by these families, usually years by the missionaries."

Christensen says the center can accommodate up to 4,000 people at a time. Some missionaries will be here for three weeks, but if they are studying a language, they stay as long as 12 weeks.

In class, the language lessons are almost exclusively focused on religious matters. The students are grouped in pairs, as they will be in the field.

Alex Nightingale is a teacher at the Provo traning center. He’s just 21, originally from Australia, and fresh off his own mission to Singapore. He's teaching Mandarin to a group headed to Taiwan. Nightingale says the first few days here can be overwhelming.

"You see a lot of big eyes," he said. "They step their first foot in the classroom, and the teacher addresses them in Chinese, and they don't hear them speak English for quite a number of days."

This particular class is trying something new. Normally missionaries study Chinese for 12 weeks. This group is trying to do it in nine.

"I remember my first day at the MTC," said Keyley Taylor of Bountiful, Utah. "I heard a missionary say that starting to learn a language at the Missionary Training Center was like trying to get a drink out of a fire hydrant. You might get some water in your mouth, but really you just get blasted in the face."

"I think that sums it up for me," she added.

Despite the seemingly impossible task of learning Mandarin in nine weeks, the missionaries seemed convinced that this is what they're supposed to be doing. Anthony Buckwalter remembers when he first received the letter telling him where he would serve.

"I can't really describe it," he said ."But once I read the word Taiwan, I almost had this instant love for the people of Taiwan, and a huge desire to serve them and help them come into Christ."

The number of Mormons willing to commit to a mission is down from a peak in the early 1990s, when there were more than 60,000 church members actively serving missions around the world.

Reid Neilson, a historian of the Mormon Church, says a dip in numbers is partly a result of demographic shifts — fewer young people are in the Church.

But there's another reason.

"There was also a shift years ago to raise the level of expectations of who could serve a mission. They called that raising the bar," Neilson said. "All of a sudden, not every man or every young woman could serve a mission because of past behavior, transgression or other challenges they might have, whether it might be physical or mental or emotional issues."

Neilson added that the number of missionaries was starting to climb back up, as the LDS Church expands into new areas.

And that's where many of the new Mormon missionaries are heading.