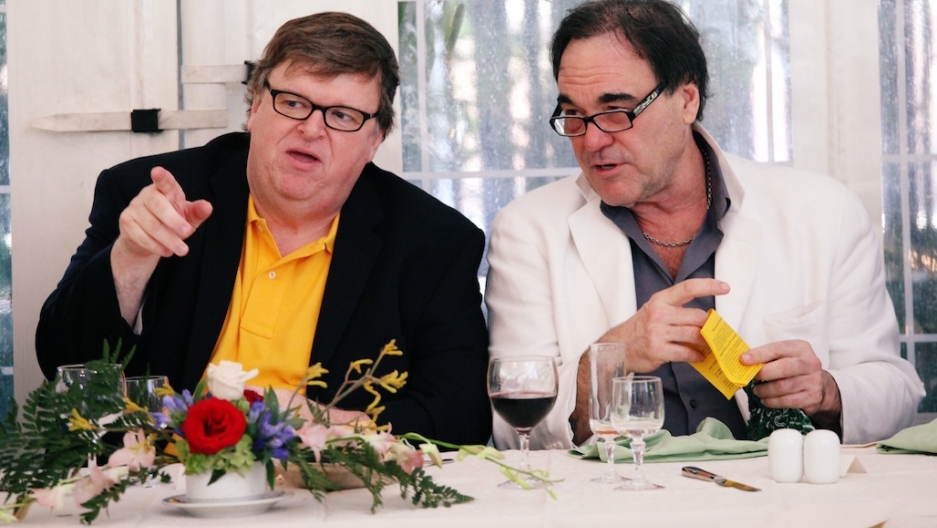 "We have spent our careers as filmmakers making the case that the news media in the United States often fail to inform Americans about the uglier actions of our own government," the two wrote. "We therefore have been deeply grateful for the accomplishments of WikiLeaks, and applaud Ecuador’s decision to grant diplomatic asylum to its founder, Julian Assange, who is now living in the Ecuadorean Embassy in London."

More from GlobalPost: Assange asylum: What do Ecuadoreans think?

Assange supporters have frequently cited the concern that if British authorities extradite Assange to Sweden, where he is wanted for questioning over sex crime allegations, he may eventually be extradited to the United States, where at least one prominent Senator called for him to be tried under the Espionage Act.

Moore and Stone highlighted the same fear in their op-ed, writing:

"...The British and Swedish governments’ actions suggest to us that their real agenda is to get Mr. Assange to Sweden. Because of treaty and other considerations, he probably could be more easily extradited from there to the United States to face charges. Mr. Assange has every reason to fear such an outcome.The Justice Department recently confirmed that it was continuing to investigate WikiLeaks, and just-disclosed Australian government documents from this past February state that “the US investigation into possible criminal conduct by Mr. Assange has been ongoing for more than a year.”

They concluded by urging British and Swedish citizens to ask questions of their own governments. "Why do the Swedish authorities refuse to question Mr. Assange in London? And why can neither government promise that Mr. Assange will not be extradited to the United States?" the filmmakers wrote.

The US State Department on Monday called Assange's vocal concerns about prosecution in the United States a "sideshow" meant to distract from the allegations lodged against him in Sweden.

"That case has nothing to do with us, it's a matter between the UK, Sweden and now Ecuador has inserted itself," spokeswoman Victoria Nuland told reporters.