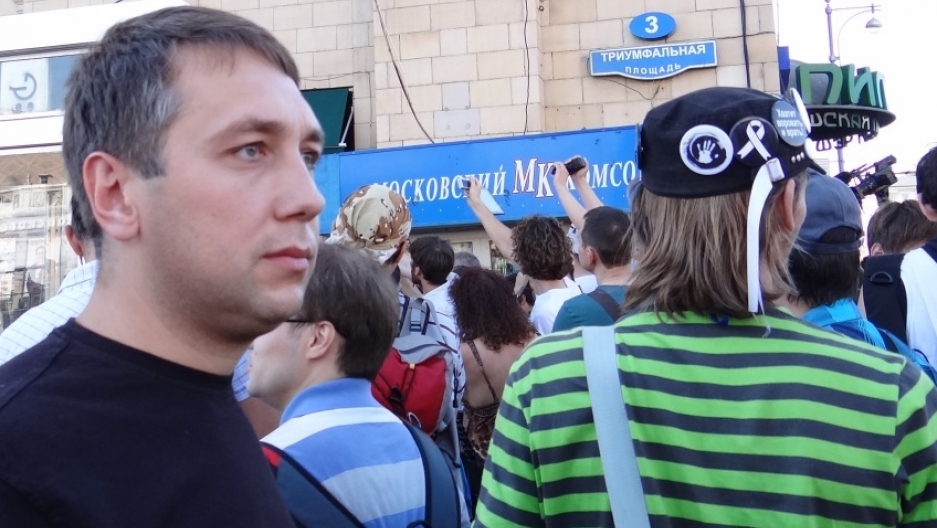 Yevgeny Arkhipov at an opposition protest. He believes the movement's while ribbon symbol will soon be left in "shreds."
Share

MOSCOW, Russia — This has been a difficult year for Yevgeny Arkhipov even by his tough standards.

Security service officials collared the opposition-minded human rights lawyer earlier this month as he was boarding a plane to attend a conference in Ukraine.

His transgression, they said, was to have owed $100 in alimony. He returned home mystified only to be informed that he owed nothing. He believes the debt was made up as a pretext to stop him from helping raise the profile of the country’s eight-month protest movement.

"They're worried the international community will accuse them of carrying out political repression,” he said wearing a suit in his small, four-desk office overlooking a railway station in central Moscow. “They have a blacklist and I’ve ended up on it.”

Friday’s sentencing of three feminist punk rockers to two years in jail dominated headlines around the world. But moves against 33-year-old Arkhipov and others appear to show the Pussy Riot case is part of a comprehensive legal strategy behind the scenes to crack down on what’s being billed as the political awakening of Russia’s burgeoning middle class.

The last measure reversed an initiative passed seven months earlier under then-President Dmitry Medvedev, who styled himself as a liberal.

The actions followed new pressure against leading opposition figures, whose houses were searched before they were questioned by police.

But Arkhipov’s recent troubles indicate the clampdown is also aimed at lesser-known figures.

Head of the Association of Lawyers for Human Rights and an outspoken Kremlin critic, he's earned a reputation as a staunch rights defender.

He's represented groups of various leanings, including a band of vigilantes in Russia’s Far East called Primorye Partizens and nationalists arrested during a notorious riot steps from Red Square in December 2010.

He's currently defending an activist arrested during protests against Putin’s inauguration that escalated into violent clashes with riot police in May.

Arkhipov credits himself with winning the release of one of the defendants by exposing procedural violations by the authorities, but he says he’s now being silenced.

“The investigators made us sign an agreement not to divulge secret information from the investigation,” Arkhipov says. “What does that mean? That to the end of our days neither I nor my team can speak about evidence pointing to our clients’ innocence or official falsifications.”

Attorneys from Arkhipov’s group are defending all 11 activists on trial in the case.

The general crackdown against them and others is getting some attention at home. The newspaper Nezavisimaya Gazeta echoed common opinion in a recent article about pressure on opposition youth group leaders and lawyers headlined “Fear as Medicine Against Rallies.”

However, analysts disagree about whether the Kremlin is managing the crackdown or whether political clans within the elite are pursuing opposition targets on their own initiative.

Some believe personal revenge is playing a role.

Among those targeted, the anti-corruption activist Alexei Navalny has waged a public campaign against the powerful head of the Investigative Committee, an agency that has taken the lead in targeting opposition figures. Alexander Bastrykin is also close to Putin, so accusing him of illegally controlling a property empire abroad was highly risky territory.

Days after Navalny published documents that appeared to corroborate the allegation, investigators accused him of embezzling $500,000 from a state timber company when he was an adviser to a regional governor.

The charges, which carry a possible punishment of up to 10 years in jail, date from 2009. They've been suspended several times for lack of evidence.

More from GlobalPost: What is Pussy Riot?

Navalny’s firebrand rhetoric has helped thrust him to the front of a protest movement of disparate groups united by their resentment of Putin.

Masha Lipman of the Carnegie Moscow Center said charging such a high-profile figure would require at least tacit approval by the Kremlin.

“I don't believe a development as politically sensitive as this one is unfolding without the Kremlin's knowledge,” she said. “It falls so smoothly into the general trend.”

The opposition plans to hold its next major rally on Sept. 15, when turnout will provide an important gauge of the clampdown’s impact.

Arkhipov, who sides with more radical members of the opposition such as the writer Eduard Limonov, predicts the authorities will step up pressure on moderate factions after the summer lull.

He’s pessimistic about the effect that will have on the protests’ future. “They’ll tighten the screws completely by New Year’s,” he said, then referred to the opposition’s symbol, a white ribbon. "There will be nothing left of it but shreds.”