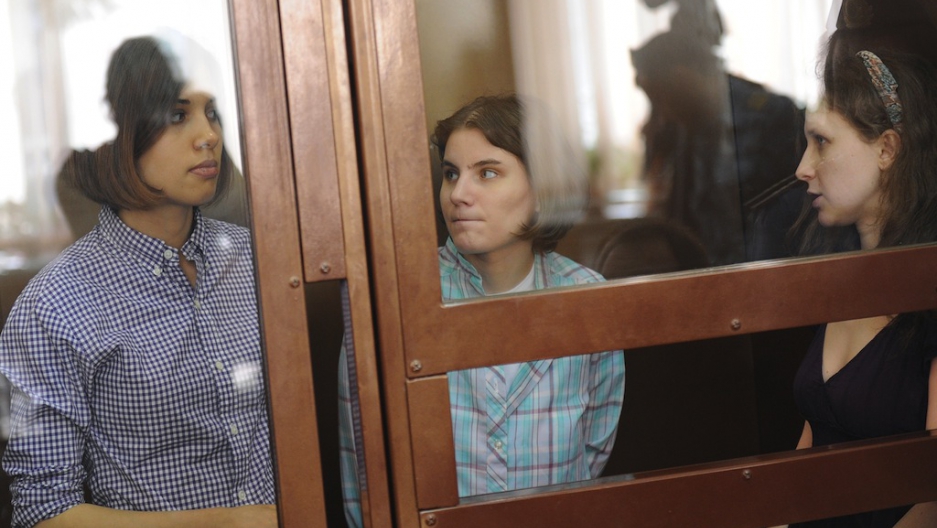 Feminist punk rock band Pussy Riot has been found guilty by a Moscow court today and sentenced to two years in prison.

"The Pussy Riot singers colluded under unestablished circumstances, for the purpose of offensively violating public peace in a sign of flagrant disrespect for citizens," said the judge, the Interfax News Agency published today.

"Tolokonnikova, Alyokhina and Samutsevich committed hooliganism -- in other words, a grave violation of public order. The court finds them quilty. The court reached this decision based on testimony of the defendants themselves and other evidence."

The United States, United Kingdom and European Union all condemned the sentencing as "disproportionate," the BBC reported.

"We urge Russian authorities to review this case and ensure that the right to freedom of expression is upheld," US state department spokeswoman Victoria Nuland said.

The band and the case have attracted international attention, becoming an example of Russia's intolerance of dissent. Pussy Riot has been in jail since March, after being arrested for staging an anti-Putin protest at the Cathedral of Christ the Savior last February. During their guerrilla performance, the band entreated the Virgin Mary to protect Russia from Vladmir Putin, who was then poised to become Russia's president.

Outside the courtroom, about 20 people, including former world chess champion and opposition figure Garry Kasparov, have been arrested. A photograph posted to Kasparov's Facebook page shows him in the back of a police van. AFP reported that outside the courtroom, police are attempting to divide the almost 400 protesters into two groups. The band's supporters yell "Freedom for Pussy Riot," while the anti-Pussy Riot protesters scream "Christ is risen".

Meanwhile, the three defendants sit inside the courtroom, yawning as the verdict is read out. Earlier, reported the Guardian, all three were smiling as the judge reprimanded them for not showing remorse, and offending "the feelings of believers." Her verdict is currently being broadcast throughout the Moscow courthouse, including in the toilet and dining room.

According to the Associated Press, prosecutors asked for three-year sentences for Maria Alyokhina, Nadezhda Tolokonnikova and Yekaterina Samutsevich, arguing down from the possible seven-year maximum. Putin had said that he hopes the sentencing is not "too severe." Two of the three women have young children.

Protests in support of the band have been planned around the world. According to the AP, in Ukraine, four feminist activists have used a chainsaw to hack down a wooden cross in Kiev's central square. In Sofia, Bulgaria, Pussy Riot supporters dressed Soviet-era statues similar to the women in the band. Elsewhere, including Washington DC, protests are planned outside Russian embassies.

Defense lawyers for the group have claimed that their clients were being abused while in detention.

"We are in a semi-conscious state. We are practically not getting any sleep. Today we did not sleep at all," Tolokonnikova, said in court earlier this month.

Last week during the groups closing statement, Alyokhina herself said that she expected a guilty verdict:

“We are nothing next to the legal machine, so we have lost,” she said. “On the other hand, we have won,” she continued. “The whole world sees that the criminal case against us is fabricated. The system cannot hide the repressive nature of this trial. In the eyes of the international community, Russia once again looks very different from what Vladimir Putin is trying to present."

Watch the video for which Pussy Riot was found guilty of religious hatred:

[View the story "Pussy Riot: Guilty of hooliganism" on Storify]