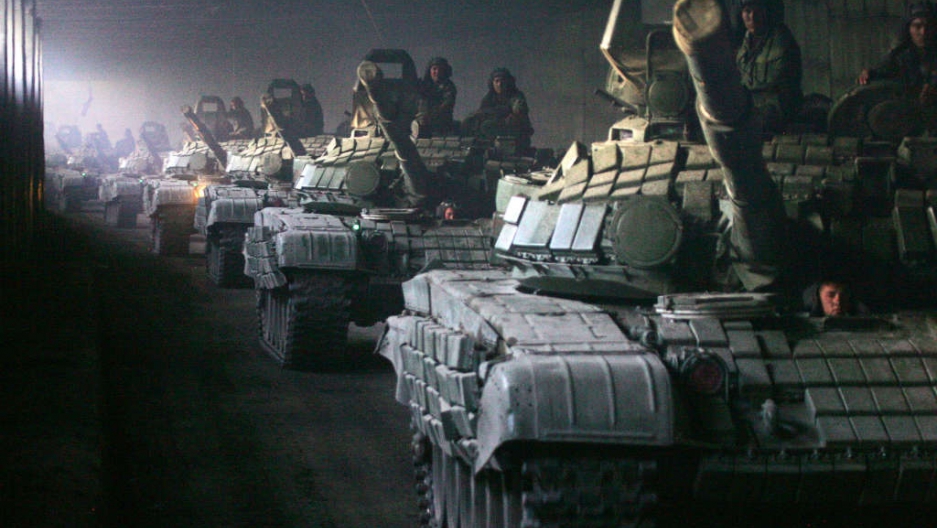 A column of Russian armoured vehicles moves towards the Roki tunnel on the border with Russia as they leave South Ossetia on August 23, 2008.
Credit: Dmitry Kostyukov
Share

This month, Russia, Georgia and its breakaway provinces of South Ossetia and Abkhazia commemorate the fourth anniversary of the war they fought in 2008.

But while the mood has been predictably festive in Moscow and the two provinces that prevailed in that war, there has already been, as Russians say, at least one spoonful of tar in a barrel filled with honey.

Earlier this month, anonymous authors posted a “documentary” on YouTube, in which three former high-ranking Russian commanders accuse Russia’s then Commander-in-Chief Dmitry Medvedev of indecisiveness during the initial stage of the August 2008 war. The documentary not only criticizes Medvedev, but also lauds his mentor and Russia’s current president Vladimir Putin as playing a decisive role in the planning and execution of the war.

Of the three generals featured in the documentary, it is ex-Chief of General Staff Yuri Baluyevsky who is most blunt in his assessment of Medvedev’s conduct four years ago. According to Baluyevsky, only after then-Prime Minister Putin called from Beijing and “distributed kicks in the backside,” did Medvedev authorize implementation of an existing contingency plan for responding to use of force by Georgia.

Medvedev dismissed the generals’ claims as lies. Indeed, there is strong evidence that Medvedev didn’t stall much, if at all.

The Georgian forces began a ground operation in South Ossetia at 00.15 am on August 8, 2008 and the Russian leadership ordered intervention at about 2 pm the same day, according to the two sides' own version of the 2008 events incorporated in the EU fact finding mission's 2009 report. Moreover, intercepts of communications between South Ossetian border guards and interviews with Russian officers suggest that Russian troops began to deploy into South Ossetia even before the Georgians started the ground offensive.

But if Medvedev didn’t stall, then why are respected generals, who have avoided strongly criticizing the political leadership in public, now accusing their former commander-in-chief of indecisiveness?

My guess is that they could have been encouraged to do so as part of a broader effort to contrast a ‘”weak” Medvedev with a strongman Putin.

More from GlobalPost: Who are Pussy Riot?

Putin’s first public reaction to the ‘”documentary” also indicates there might be a well-orchestrated PR campaign underway. Putin was visiting a Russian province on August 7 when a Kremlin pool reporter working for a state-controlled national news agency asked the first question, inquiring about the documentary, which was not widely known at that time. It was illustrative that in his answers Putin chose not to explicitly defend his protégé’s record and sought instead to detail his impact on the decision-making in the 2008 operation.

And if that was not enough, Putin took more questions on the subject the following day, this time confirming that he did call Medvedev and Defense Minister Anatoly Serdyukov twice from Beijing on August 7 and 8, 2008. This disclosure is particularly illustrative because Putin was the prime minister at that time while the defense minister reported to the president.

But why would the Kremlin orchestrate a PR ploy to discredit what Russians have earlier thought to be one of the few real accomplishments of Medvedev’s presidency?

Putin may be seeking to advertise his decisive role in the war to boost his credentials, which have been eroding in Russia in general and in Moscow in particular. An August 2012 poll by the Public Opinion Foundation shows that the share of Russians who trust Putin is at its lowest in the past nine years.

Only 44 percent of Russians trust Putin compared to 55 percent in March 2012 and 47 percent in 2003, according to the website of this respected polling organization, which lists the Kremlin among its regular clients.

It might also be the case that Putin is not so much trying to reaffirm his lead role during Medvedev’s presidency, as he is trying to cut the man down to size. After all, Medvedev has continued to publicly offer opinions about major issues of defense and foreign policy in spite of leaving the Kremlin in May to become prime minister.

An even more important reason behind the campaign could be a desire by the Kremlin to offer a better justification to the Russian public of why Putin had to return to the presidency in 2012 after stepping down and backing Medvedev as Russia’s new president four years earlier.

When they announced the job swap back in fall 2011, the two didn’t offer a plausible justifiable explanation, and that angered the Russian public, fuelling street protests this past winter. What better justifies Putin’s return to the post of the Commander-in-Chief than revelations by respected generals that his predecessor proved to be an indecisive, ineffective national leader in times of war?

More from GlobalPost: A Putin joke is no laughing matter