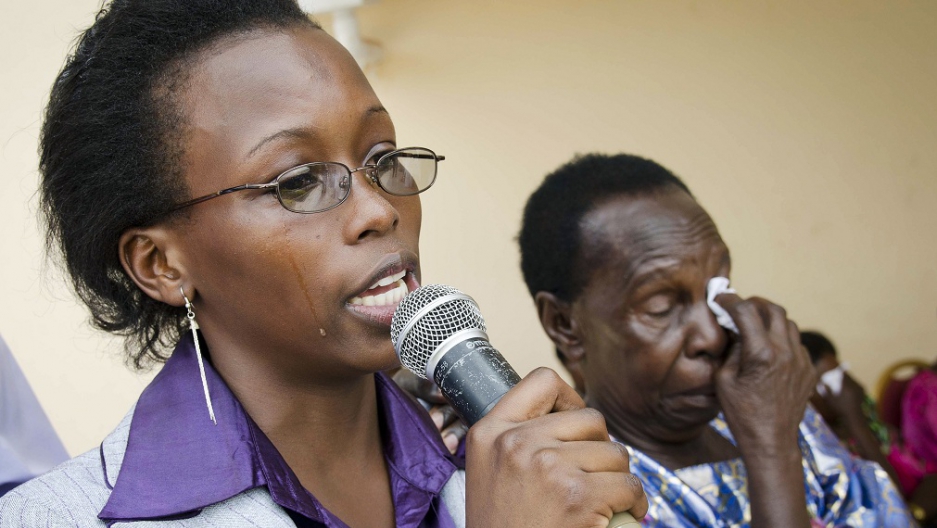 Sister of gay Ugandan activist David Kato, Eva Mulumba (L) cries as she gives a speech beside Kato's mother, Nalango Lydia Mulumba (R) during a memorial service for Kato in Kampala, on January 26, 2012. Kato served as a Advocacy and Litigation Officer for sexual minorities in Uganda. Kato was brutally murdered at the age of 46 years his home in Kyetume, Mukono District on January 26, 2011.
Credit: Michele Sibiloni
Share

The Anonymous collective has hacked and vandalized a website belonging to Ugandan Prime Minister Amama Mbabazi in protest of the country’s laws concerning members of the lesbian, gay, bisexual and transgender (LGBT) communities.

In Uganda, homosexuality is officially illegal. The Ugandan parliament has also considered passing laws that would punish those who fail to report homosexuality to the police and have even considered executing members of Uganda’s LGBT community.

"Your violations of the rights of LGBT people have disgusted us. ALL people have the right to live in dignity free from the repression of someone else's political and religious beliefs. You should be PROUD of your LGBT citizens, because they clearly have more balls than you will ever have. Real Ugandan Pride is demonstrated in standing up to oppression despite fearing the abuse, torture and murder inflicted on LGBT at the hands of the corrupt government,” read a statement left by Anonymous on the Ugandan Prime Ministers website.

More from GlobalPost: Anonymous sets out to avenge Demonoid

Anonymous has pledged further cyber attacks against the Ugandan government, claiming that the collective is “in complete control” of the Ugandan president’s website. Anonymous has also released username and password information for Uganda’s Justice, Law and Order society’s webpage. That site is now down.

“We will not stand by while LGBT Ugandans are victimized, abused and murdered by a ruthless and corrupt government. #TheEliteSociety and #Anonymous will continue to target Ugandan government sites and communications until the government of Uganda treats all people including LGBT equally and with respect, dignity and immediately ends the arrest and harassment of LGBT,” read an Anonymous posting on pastebin shortly after the Ugandan prime minister’s website was defaced.

More from GlobalPost: Helicopter footage of raid on Dotcom home