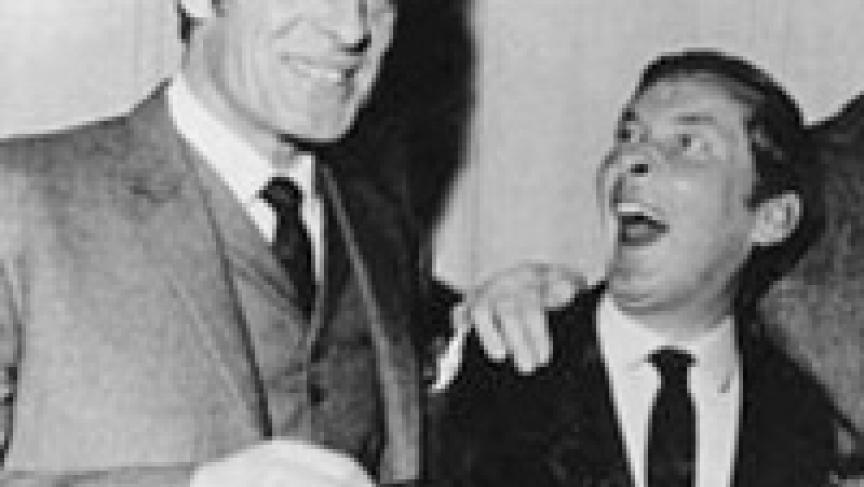 Kenneth Williams (left) and Hugh Paddick playing the characters Julian and Sandy on the BBC radio show, Round the Horne. (Photo: BBC)

Share
Here's one way to say hello: "Bona to vada your dolly old eek." That means 'nice to see your pretty face' in Polari, a slang with roots in the theater that for decades functioned as a kind of secret code within Britain's gay community. Clayton Littlewood has written a number of books about London's Soho neighborhood and in particular its gay community. He remembered, for instance, sitting in a coffee shop with an elderly gay man, watching the world go by. "And he said 'vada the eek dear, don't tell me you haven't seen her, she's been trolling round here for years, fiddling with the basket.'" That means, "Look at that face, don't tell me you haven't seen him." (Her means him.) "He's been walking around here for years." And "fiddling the basket"? "I suppose you could describe that as adjusting his lower anatomy while he's walking down the street," said Littlewood. Polari isn't a fully functioning language. It doesn't have a grammar or a comprehensive vocabulary. Instead, it's a slang, a code, a kind of substitution language in which you can drop in certain words in place of others. Christopher Bryant, the editor of Britain's gay culture magazine, Polari, said it dates back to something called Thieves' Cant. "So basically all the thieves could talk to each other in a language that would mean they weren't understood," he said. "And this really developed into Polari in the 19th century. It was called 'parlyaree' and it was based in Italy; all the circus folk would use it." The slang remained popular in British theater into the twentieth century, used by straight and gay alike. But Polari became something more, a necessity for Britain's gay community after the second world war. Homosexual acts were illegal in England until 1967 and the post-war period was particularly oppressive. "A lot of this was actually influenced by the Americans," said Bryant. "They were telling Churchill that homosexuals were a security threat and that there needed to be a clamping down. And as this culture of clamping down happened so Polari flourished because it became dangerous to be openly gay." Polari was a private language that gay men could use in public without fear. But for all its seriousness back then, said Bryant, Polari was—and is—a bit like Californian 'valley girl' speech. It's exclusive, playful, and inventive. Some words are just regular words spoken backwards such as 'riah' for hair and 'ecaf' for face, often shortened to 'eek'. Polari has imported words from French, Italian and Yiddish. And the vocabulary combines to make new definitions. Instead of saying your eyes, you say your 'ogles' and proceed from there. "Your ogle fakes are your glasses," said Bryant. "And your ogle shades are your sunglasses and your ogle riah fakes are your false eyelashes, and your ogleriders are your eyebrows." But it was a 1960s BBC radio show called Round the Horne that made Polari famous. It featured two characters named Julian and Sandy, the fictional owners of Bona Books. Today we'd say they were flamboyantly camp characters, very likely gay characters. But not then. They were simply funny characters who used a funny-sounding language. The British public were listening to Polari and, while they got the sense that the meaning was probably rude, most wouldn't have known what the words meant. Today Polari is no longer necessary. British laws and society have changed dramatically since the middle of the twentieth century. Now, as one aficionado said, it's purely a celebration of a lost culture. I asked David Benson and others if they knew whether there was an equivalent to polari for gay WOMEN. They didn't know, but if you do, let us know in the comments below.