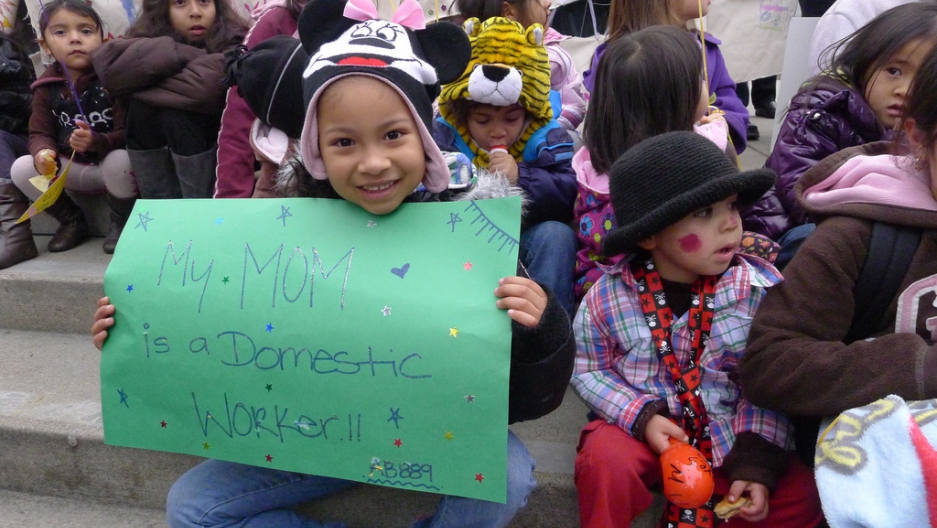 They feed the kids and clean the floors, but domestic workers and caregivers are often maligned by a system that allows their abusive employers to fly under the radar.

But no more, they say, in California.

Domestic workers there are demanding a Bill of Rights that would ensure fair working conditions statewide and mandate minimum wage pay and eight hours of sleep per night. The California Domestic Workers Bill of Rights (CDWBR) would also allow domestic workers to cook their own food in the kitchen they work in, and would include them in the workers compensation and overtime protection laws already on the books.

Similar to a New York state law that was passed in 2010, the California legislation (A.B. 889) was sparked by a grassroots campaign that had wide support with lawmakers. Although the New York law took six years to pass, CDWBR has passed State Assembly and is currently being debated in the Senate, after being introduced in late 2010.

"Domestic workers take care of the elderly, the disabled, and our children. The allow us to go to work every day, knowing that our children, our loved ones, are in good hands," said Art Pulaski, of the California Labor Federation, in support of the bill in a video.

However, private health care and home-care organizations oppose the bill, according to the Oakland Tribune's InsideBayArea.com. "The Chamber of Commerce opposes the legislation because of the 'costly' penalties it would impose on employers. AARP is against the bill for similar reasons and is currently seeking to get it amended."

But most agree that something needs to be done to protect the rights of workers in the home.

The UCLA Institute for Research on Labor and Employment did a study on domestic workers, and produced unequivocal results. Here are just a few:

96 percent of child care workers and nearly 93 percent of maids and housekeepers reported that their meal breaks were cut short, interrupted, or simply not provided.

Nearly 75 percent of child care workers and 35 percent of maids and housekeepers in Los Angeles County were paid at an hourly rate lower than the minimum wage.

"Domestic workers are frequently exposed to verbal and physical abuse," reads the report. "One-fifth of Northern Californian domestic workers surveyed reported having been insulted or threatened by their employers and almost one-tenth of these workers reported being sexually harassed or having experienced violence. These results probably underestimate the problems faced by domestic workers, as more than a third of respondents refused to answer the question."

Fiona Ma, an Oakland assemblywoman who co-authored with bill with Assemblyman Tom Ammiano, has long thought domestic work needed to be regulated and be subject to the same laws as any other type of employment.

"People want to hire someone and just do what they want and not act like a business or an employer. But they are," said Ma to the Tribune after doing domestic work for a day in an attempt to build support for the bill. "People who are employing other people to have them around their house are employers and should be subject to the same rules and regulations that other employers are."

For more of GlobalPost's coverage of rights for workers, check out our Special Report "Worked Over: The Global Decline in Labor Rights."