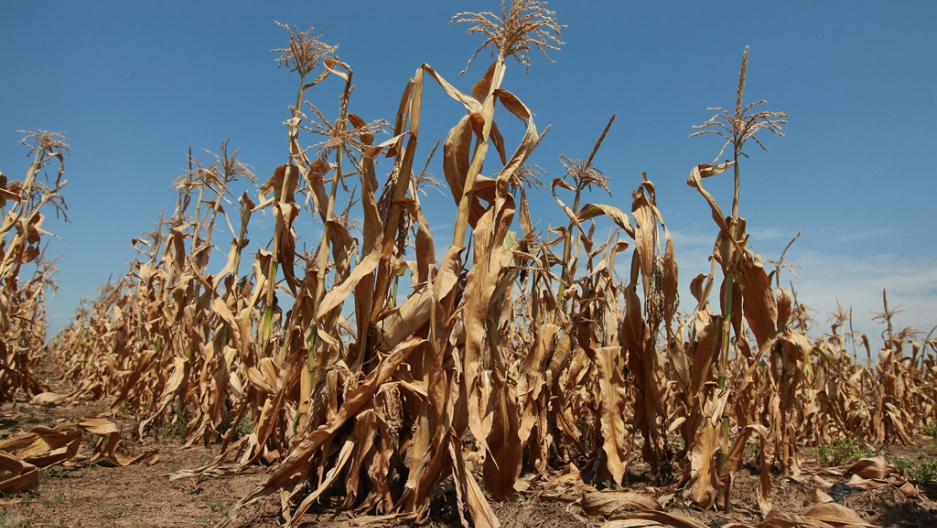 Corn plants struggle to survive in a drought-stricken farm field on July 19, 2012 near Oakton, Indiana. The corn and soybean belt in the middle of the nation is experiencing one of the worst droughts in more than five decades. Indiana was the nation's fourth largest corn producer in 2011.
Credit: Scott Olson
Share

President Barack Obama will announce later today a plan to buy $170 million in pork, lamb, chicken, and catfish to help farmers suffering from an ongoing and brutal drought gain some immediate cash.

According to Reteurs, Obama's announcement will be made at a campaign stop in Iowa, a state increasingly important this election cycle. He is expected to speak about "food nutrition assistance" programs and will encourage Department of Defense vendors to purchase meat they can freeze in advance.

More than half the counties in the United States have been declared natural disaster areas by the USDA. The administration has said that the drought is the worst combination of heat and dryness since the 1950s and plans to buy $100 million of pork, $50 million of chicken, and $10 million each of lamb and catfish on top of $30 million already pledged to the farmers.

Bloomberg reported that corn prices have surged 60 percent since mid-June, and had reached an all-time high of $8.49 a bushel on Aug. 10. However, livestock producers are considered greatest at risk because they already receive less federal support, and a livestock-assistance program in the current five-year farm bill expired last year. Though both the US Senate and the House Agriculture Committee have approved replacement bills, House Republican leaders have not set a vote. On Aug. 2, the House approved a $383 million measure to reinstate livestock aid, but the Senate took no action.

“We are very limited in what we can do” because of the congressional impasse, Agriculture Secretary Tom Vilsack said in an interview last week. “The key issue for livestock is access to hay and grazing opportunities,” he said, adding that the USDA is focusing its response on opening conservation lands to grazing and helping move water to parched herds.