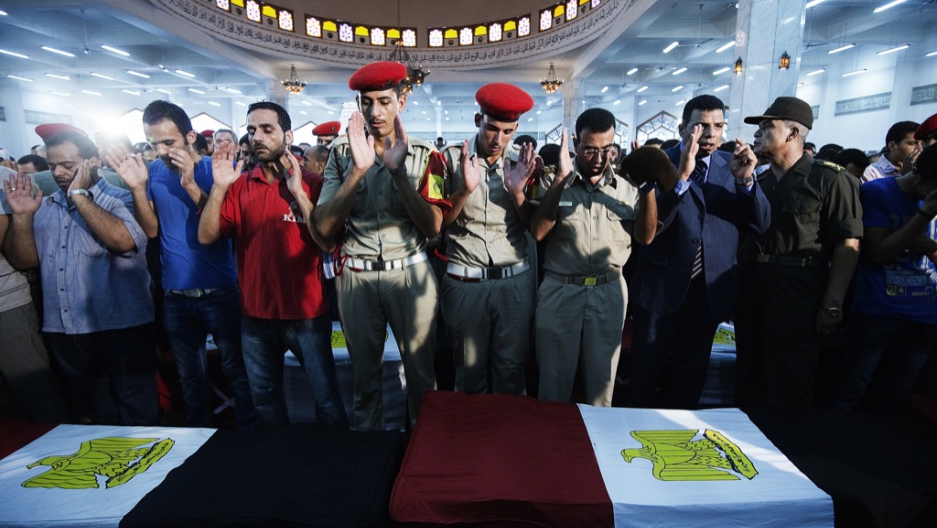 Relatives and friends pray over the coffins of soldiers killed during a border post attack in Northern Sinai, during their funeral on August 7, 2012 in Cairo, Egypt. Since then, President Mohamed Morsi has ordered security forces to take full control of the Sinai Peninsula. Yesterday, he dismissed key military officials and nullified a constitutional provision aimed at limiting presidential power.
Credit: GIANLUIGI GUERCIA
Share

Who? Good question. Egypt's own Ahram Online described Sisi as a "media-shy" relatively "little-known" military figure who has kept a "low profile" since joining the then-ruling military council last year.

Sisi was sworn in as commander-in-chief of the army and defense minister on Sunday, becoming the nation's first defense minister not to hold the field marshal army rank, coming instead from the country's military intelligence unit, according to Ahram Online.

The last time Egyptians are likely to recall seeing Sisi name's in the news was during the virginity test controversy, when the military was under fire for reportedly conducting a primitive procedure known as a "virginity test" on female detainees arrested after a March 2011 protest. It has since been banned thanks to efforts by women like Samira Ibrahim (read her story here). At the time, Sisi was the first general to admit that the military engaged in the practice, according to Daily News Egypt. He issued a statement defending the military's move, saying "the virginity test procedure was done to protect the girls from rape as well to protect the soldiers and officers from rape accusations," according to Ahram Online. But he later promised to ban the practice.

It is also likely no coincidence that Sisi formerly served as commander of the country's north, including the troublesome Sinai region, where the Egyptian military just launched military airstrikes for the first time in three decades following the recent killing of 16 Egyptian border guards.

Such claims were quickly denied by SCAF, according to Daily News Egypt. But the rumor could see new life with President Morsi being the Muslim Brotherhood's presidential candidate and all. Still, who knows.

Sisi is also believed to be among the youngest, if not the youngest member of the ruling military council, and indeed is nearly two decades younger than his 75-year-old predecessor Tantawi, who lead the country's armed forces since 1991.

Tantawi and Sisi also both worked as military attachés, according to Ahram Online, Sisi having served Saudi Arabia and Tantawi in Pakistan.