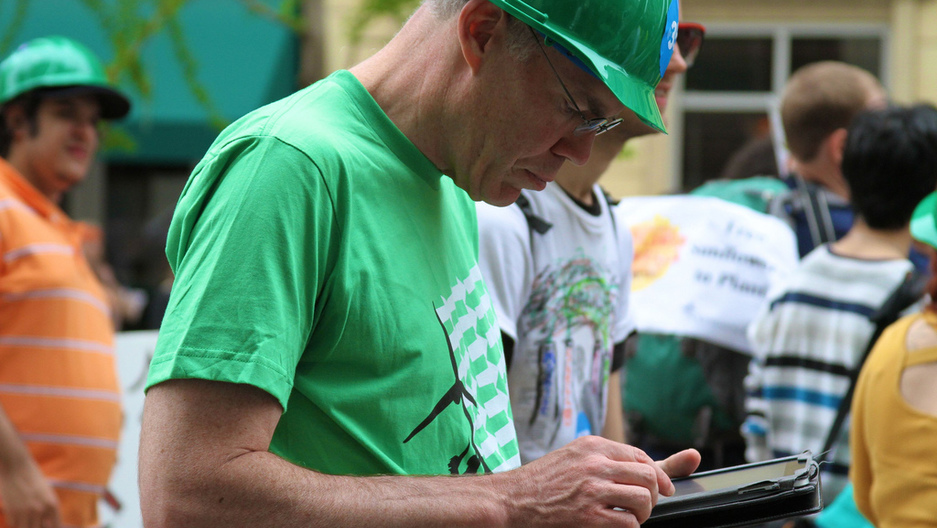 According to Bill McKibben, about $20 trillion worth of oil and coal, need to be kept underground to prevent disaster. (Photo by linh.m.do via Flickr.)

First there was an early hot spring, then a broiling summer and now about half of America is sizzling and in the grip of drought.

Add a dash of tornadoes, early tropical storms and greater than normal ice melt, and many observers point to climate disruption.

Environmentalist Bill McKibben is one of the most outspoken American voices on climate change. His non-profit group, 350.org, organized the largest global protest in history. Now he's taken his message to the pages of Rolling Stone Magazine in a recent article headlined “Global Warming’s Terrifying New Math.” In the article, McKibben revealed some startling statistics about climate change that shocked even him, though he said they shouldn’t have because he’s been researching global warming for years.

Following the warmest May on record for the Northern Hemisphere, June broke or tied 3,215 high-temperature records across the U.S. July too broke records for warmth.

"May was also the 327th consecutive month in which the temperature of the entire globe exceeded the 20th Century average, the odds of which occurring by simple chance were 3.7 x 10-99, a number considerably larger than the number of stars in the universe," McKibben wrote in his article.

McKibben’s first book on the subject, “The End of Nature,” was published in 1989. McKibben was sure it would provide all the evidence needed to see the damaging effects of climate change.

“But it turns out that’s not quite how change happens, and in fact, what’s happened over the quarter century is really that we’ve lost more than we’ve won,” McKibben said. “The amount of carbon ... that we pour into the atmosphere (keeps increasing) and the temperature keeps going up.”

What’s new, McKibben said, is there’s a better understanding of why.

The one thing he said the world has agreed on about climate change is that the temperature can rise only two degrees Celsius, or about 3.6 degrees Fahrenheit before the survival of humanity is in jeopardy.

But McKibben said that number is too high. According to him, we’ve already raised the temperature by about one degree Celsius, and have melted 40 percent of the sea ice in the summer Arctic.

“If we were at all sensible, we would do what we could to stop right here,” he said.

And yet, he said, even that’s not enough.

In reality, we’re emitting 30 gigatons a year, and that amount’s increasing by about three percent each year because of all the coal and gas we’re burning. That only gives us 16 or 17 years, Mckibben said.

But the number that really scares him is the amount of carbon that the fossil fuel companies and countries like Venezuela or Kuwait already have in their reserves. He estimates that’s about 2,800 gigatons, or five times more oil, coal and gas than various energy companies and climate scientists think is safe to burn.

That means around four out of five of those barrels of oil and tons of coal, or at current market value, $20 trillion worth of oil and coal, need to be kept underground.

“That’s the trouble that we’re in. We’re about to go way-way-way over the limit. And nobody, no president, no politburo, no anybody is effectively saying: time to slow down,” McKibben said. “What we’re dealing with is the out-of-control greed of a few companies. We know what the future should look like, and we know how to do it."

McKibben said Germany is a great example.  According to McKibben, in one day, the country generated more than half of its electricity from the sun. In 2011, about three percent of its total energy was generated by the sun, and by 2050, the nation's environment agency wants a complete conversion to renewable energy.

“That indicates that it’s not technology that limits us, it’s political will. And, one of the ways that we’ll generate that political will is make it clear just what the greed of this industry is doing to the one planet we’ve got,” McKibben said.

It’s not just about taking shorter showers and driving smaller, more efficient cars. The real problem, McKibben said, is the amount of money that fossil fuel companies give to the political system to make sure that they receive special breaks and can pour their waste out for free.

“And that’s why, when you get down to it in any kind of mathematical analysis, with apologies to Walt Kelly, we’ve met the enemy and they is Shell, and Conoco, and Exxon, and all the rest,” McKibben said.

“And let's hope that we can bring ourselves to part at least with some of that easy return, because the long term return on that investment may not be hell exactly, but it’s got a pretty similar temperature,” he said.