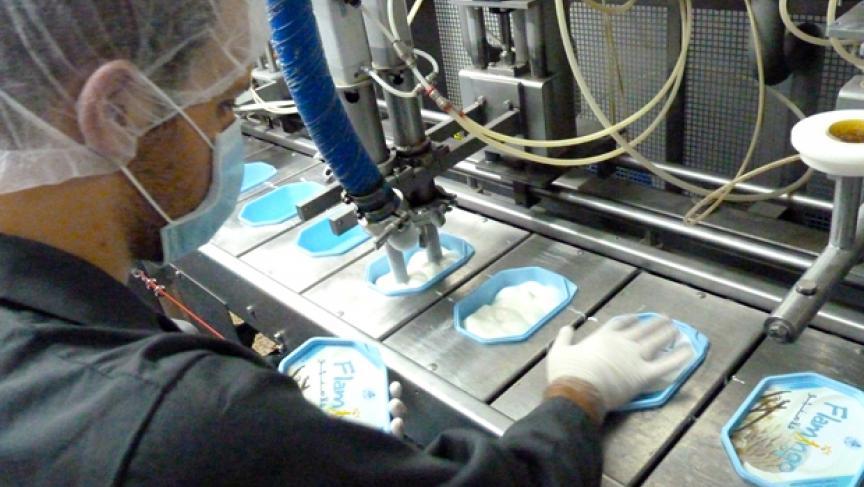 The Al-Arz factory in Nablus employs about 250 Palestestinian workers. (Photo by Matthew Bell.)

Mitt Romney paid a visit to Jerusalem recently and made some waves by calling attention to the struggling Palestinian economy in the West Bank.

He compared average incomes there with those in Israel. The Jewish state has indeed weathered the recent global economic downturn remarkably well. But in addition to grossly underestimating the gap in per capita GDP, Romney was also comparing apples and oranges: the Palestinian economy is a unique case because the territory is under Israeli military rule.

Build it and peace will come.

That has been the basic belief shared by the United States and its western partners, Israel and the Palestinian Authority. Here is how the thinking goes: leaving aside the isolated and impoverished Gaza Strip for the time being, if 2.5 million or so West Bank Palestinians are prospering, then peace will be possible.

Without a doubt there are bright spots in the West Bank economy. One is in the village of Atara, which sits in the hills about 10 miles northeast of Ramallah, the de facto capital city of the West Bank.

“This is the best supermarket in the village,” Basima Abdel-Mohsen said with a proud smile.

It turns out, she is biased, though. It was her son who took out a small business loan to open the place. But she very well might be right. The name of the supermarket roughly translates into “Supermarket of Love.”

It is well-stocked, meticulously neat and the boss said business is great.

“Thanks be to God,” said 28-year-old Abdelhadi Amira. “People kept buying more and more stuff, and we just kept expanding the stock.”

Amira already had a steady job as a Palestinian policeman. But his $500 per-month salary was not cutting it, he said. So he opened this supermarket three years ago. He has since taken out a second loan and expanded the business. The money the store brings in helps support his own family of five, his mother and a few other relatives who work in the store too.

Amira said his leap into entrepreneurship has been well worth it. But away from this small business success story, the economic picture in the West Bank becomes less rosy.

At the Al-Arz ice cream factory in Nablus, rows of bright yellow lemon popsicles cascaded along the assembly line. Two brothers, Raed and Zahi Anabtawi are the third generation to run the family company. Their grandfather founded Al-Arz in the 1950s.

Back then, the company made ice blocks, delivered to people’s homes by bicycle.

Today, Al-Arz is doing well. It produces about 50 tons of ice cream products per day and supplies about 40 percent of the West Bank ice cream market. Al-Arz employs about 250 workers at its modern, high-tech factory, making it one of the largest private employers in Nablus.

It buys ingredients from abroad, like milk powder from Poland, chocolate from Belgium and a variety of items from the most vibrant regional economy, Israel. But Anabtawi says trade with Israel is a one-way street.

Anabtawi said he has never heard a clear answer to that question from Israel. But he suspects it’s about protecting Israeli companies from less expensive Palestinian ice cream.

“It is also about politics,” he said.

Anabtawi did not want to say that his company’s long-term future depends on getting back into the Israel market. But the potential benefits are clear. Israel’s per capita GDP for example is about $30,000 a year. For Palestinians, it’s about $2,000.

When Mitt Romney alluded to that income gap in a speech to wealthy Jewish donors in Jerusalem, Ahmad Aweidah says he was not insulted. He’s the CEO of the Palestinian stock exchange. Using less-than-polite language, Aweidah suggested that Romney was uninformed about the fundamental drag on the West Bank economy.

The overall economic growth rates in the West Bank over the last several years have been impressive. But the fuel for that growth has been international aid. And that is a problem.

Aid money has allowed the Palestinian National Authority to put tens of thousands of people on its payroll. As a result, the PNA is now the largest employer in the territory. That means more Palestinians have more spending power. Young entrepreneur Bashar Al-Azzeh said the winners include Palestinian telecom, insurance and real estate businesses. But he said there is also a downside.

That is a point highlighted in a recent World Bank report. It warned that the industrial and agricultural sectors of the West Bank economy are shrinking. Foreign aid, the report said, cannot sustain long-term economic growth. What is needed is a dynamic, private sector-led economy.

And the only way to make that possible, the report concluded, is for Israel and the Palestinian Authority to reach a political settlement.