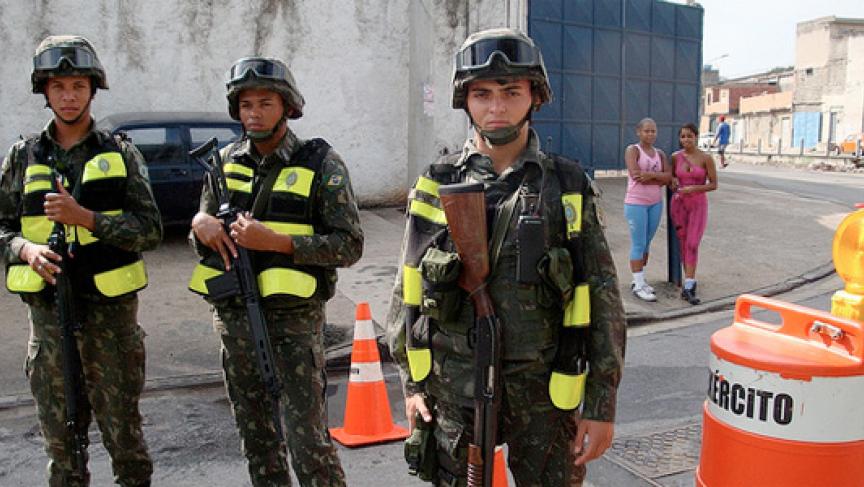 Soldiers man the entrance of Complexo do Alemao, a slum-like favela in Rio de Janeiro. (Photo by Lily Jamali.)

No other issue has commanded more attention in Rio de Janerio than public safety, as the city prepares to host the 2014 World Cup and 2016 Olympics.

The city wants badly to rehabilitate its image as a haven for gangs and drugs, especially in the its favelas, the slum-like neighborhoods where the vast majority of the population lives.

To that end, a grand experiment is underway. It's called "UPP" — the Portuguese acronym for "Pacifying Police Unit" — and it's meant to bring peace to Rio's favelas.

Police swooped into the neighboring favelas of Vidigal and Rocinha last November to install the "pacification units." Hundreds of community police officers flooded the neighborhoods, driving out drug traffickers and other criminals. Then, they set up permanent patrols.

At one entrance to Vidigal, lights flash from the top of a police car as four UPP officers get ready for their afternoon patrol.

Moments in, Officer Filippe Jesus points out a pocked concrete wall, signs of a time when bullets flew wild. Battles for territorial control by drug gangs and shootouts with police were the norm here, as in so many of Rio’s favelas.

"Look there, bullet marks," he said "There was a fire fight in the favela before the pacification came."

Officer Jesus is one of hundreds of UPP officers now stationed in Vidigal. One of the new, friendlier faces of Rio's police force, which has long been viewed with suspicion and mistrust by city residents.

In what amounts to an acknowledgement that they can't win the war on drugs, Rio's UPP officers are focused instead on getting arms off the streets.

"There were a lot of confrontations here," Jesus said at one particular corner. "This was a point that was considered critical, an active spot to sell drugs. Now, if they are selling, we encourage them to move on. But the main focus is the weapons."

The UPPs seem to be working. Violent crime has fallen in the 23 Rio neighborhoods that now have UPPs. Homicide rates have fallen to near zero in UPP communities, in a city with a murder rate five times as high as New York City.

But while this long-wished-for peace continues here, de Oliveira said things are not so good in neighboring Rocinha, and that's scary.

"It's hard to watch what's happening in Rocinha," he said. "Even with the police occupation there, the pacification units, they're having shootouts every day. So there is a certain fear for us here in Vidigal."

Earlier this year, as a UPP was installed in a collection of favelas called Complexo do Alemao, Rio de Janeiro's Security Minister Jose Beltrame said it would take time to repair neighborhoods that have endured decades of domination by drug traffickers.

The city's six million residents are watching carefully, waiting to see if the experiment works.

Blogger Raul Santiago says favela residents felt abandoned by the state. The neighborhoods were accustomed to having everything from basic services to vigilante justice delivered by drug traffickers.

But Santiago said the real-time reports, photos and videos residents sent to him as the UPP was installed showed an unprecedented approach. And he hopes social media will ensure it stays that way.

"The fact that the police are entering calmly is something that we hadn’t seen before," he said. "So we publicize this new way of behaving and we stay on top of it also in case there is police abuse. We have the resources and technology now to prove what has happened."

But there's a curious downside to the UPP presence.

As drug traffickers have been squeezed out, the order they once brutally enforced has faded too. Violent crime might be dropping, but community activist Renataa Trajara says petty crime is booming.

"We all knew they would beat us and even execute people," Trajara said. "No one robbed. And so people sort of had a restriction to not rob."

And Rio's notorious law enforcement corruption has yet to fade. UPP officers — including high ranking ones — have been caught taking bribes.

One commander was even imprisoned for trafficking drugs in a UPP community. Reports of brutality — including rape, torture and executions — by UPP officers have also recently surfaced.

Officials have taken very public steps to root out corrupt police. But long-standing distrust of law enforcement is a major barrier to the UPP program's success.

While this isn't Rio's first public safety experiment, public security expert Ignacio Cano says this one could be the first program to actually work.

His faith comes in part from the funding. Rio has committed to pay for the UPPs at least through the 2016 Olympics. Those who support the program hope to see it last well beyond when the last Olympians head home in 2016.