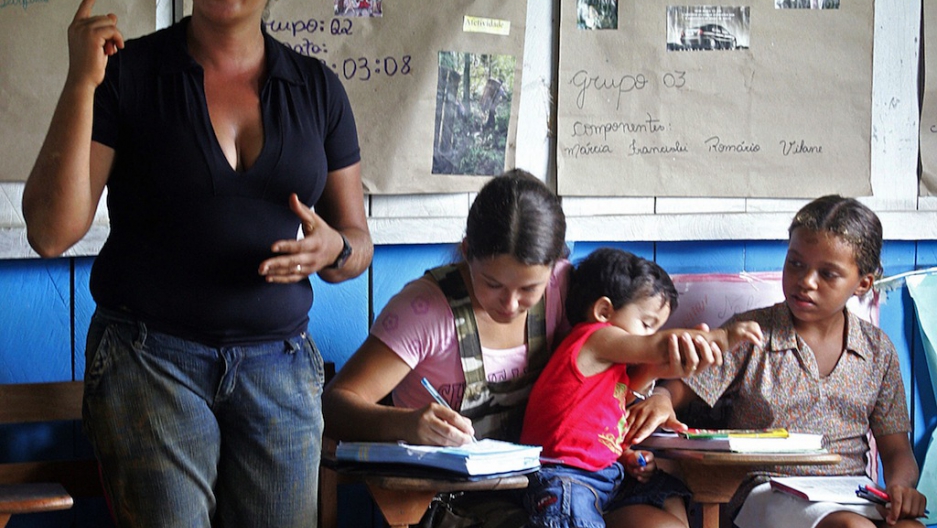 Teacher Antonia Beleza de Lima (L) gives a class at a public school in the settlement of Tupa, in Xapuri, in the northern Brazilian state of Acra, some 3,100 km from Brasilia on March 17, 2008.
Credit: EVARISTO SA
Share

SÃO PAULO, Brazil — Brazil has approved a bill that reserves half the places in the country's prestigious federal universities for state school students.

The bill will reserve half the federal universities spots for high school graduates of public schools, according to Fox News. The reserved spaces will be distributed among black, mixed-race and indigenous students in proportion to the racial make-up of each state.

President Dilma Rousseff is now expected to sign the bill into law.

Sen. Paulo Paim said most Brazilians would benefit from the new law, as private schools account for just one of 10 students in Brazil, reported BBC News. But the measure has been criticized for its racially based quotas, although they will be discontinued in 10 years.

According to the Associated Press, Sen. Aloysio Nunes Ferreira, who voted against the bill, said, "It straitjackets universities because it violates their management autonomy."

But Brazil's Supreme Court ruled earlier this year that it was constitutional for universities to use racial quotas, reported Fox News. After Nigeria, Brazil has more citizens of African decent than any other nation, as 51 percent of its 192 million people are black or mixed-race.

Despite it being one of the most ethnically diverse countries in the world, Brazil's private schools are still predominantly white, according to BBC News. Private school students are much better prepared for tough university entry exams than those who attend public schools, and they get most of the places in federal universities, which are heavily subsidized and virtually free of charge.