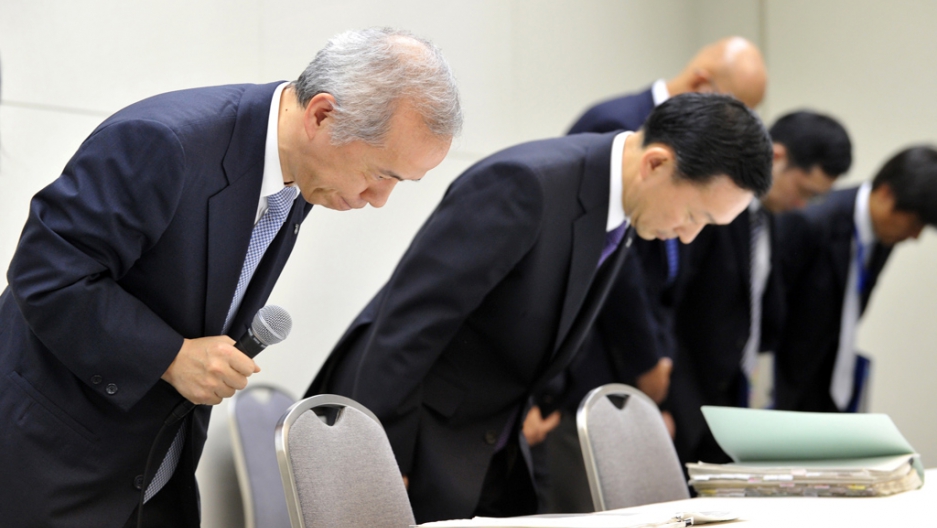 TOKYO, Japan — It is shortly after 11 a.m. on March 14, 2011. A voice coming from the Tokyo headquarters of Tokyo Electric Power (Tepco), operator of the Fukushima Daiichi nuclear power plant, warns employees at the facility that a tsunami advisory has been issued following another earthquake, just three days after a magnitude-9.0 quake and powerful tsunami had triggered the worst nuclear power crisis in Japan's history.

After a short silence, Fukushima Daiichi's emergency command center is seen shaking violently. The next voice belongs to the plant's manager, Masao Yoshida.

Employees begin to talk over one other and conversations lose their clarity amid the chaos; unidentified staff move around behind the seated Yoshida, clearly visible in his white protective clothing.

This was the moment, captured on film, that elite Tepco workers battling to save Fukushima Daiichi from a catastrophic meltdown were confronted by a second blast, in one of its six nuclear reactor buildings.

Later, workers confirmed that the reactor No. 3 building had exploded. The No. 1 reactor building had already been damaged in a hydrogen explosion the day after the tsunami; the structure housing unit No. 2 would meet the same fate on March 15.

These critical exchanges between Fukushima Daiichi and Tepco's crisis response team in Tokyo were shown to journalists for the first time on Monday. The firm released the first excerpts from 150 hours of footage, recorded between the evening of March 11 and midnight on March 15, 2011.

While heavily edited, the footage is the most detailed visual insight yet into the human response to the world's worst nuclear disaster since Chernobyl 25 years earlier.

Tepco had initially resisted calls to release the footage, citing the privacy of its employees. It relented under pressure from the trade and industry minister, Yukio Edano, who was the government's chief spokesman at the height of the crisis.

The firm also found it impossible to resist calls for transparency after it was effectively nationalized last week, with a 1 trillion yen ($12.8 billion) injection of taxpayers' money — a day after it announced quarterly losses of 288 billion yen ($3.7 billion).

But the exercise in openness only went so far. It is unlikely to settle one of the most contentious issues surrounding Japan's response to the disaster: whether Tepco planned to evacuate all of its workers and leave the plant to an even worse fate — one that Prime Minister Naoto Kan has since said could have triggered the evacuation of Tokyo.

Kan and Tepco have offered wildly different accounts of this pivotal moment in the battle to spare Fukushima Daiichi. Key footage of a particularly heated exchange between the two sides is missing, because the firm says its recording devices automatically stopped when the hard drive filled up. Grainy images of a meeting between Kan, Edano and Tepco executives at the firm's headquarters on March 15 is inaudible, an anomaly Tepco blamed on a technical oversight.

That clip shows Kan bursting into the firm's office and speaking for several minutes, waving his arms in frustration. Officials and workers at the plant sit in silence for the duration of his 20-minute tirade. At the time, Japanese media quoted him as demanding of Tepco executives: "What the hell is going on?"

He would later tell a parliamentary inquiry into the accident: "I was frightened and felt helpless. You can't expect a nuclear expert to be prime minister or a cabinet minister, so we need top regulatory officials to provide expertise and help us. We didn't have those people."

The company has also distorted the faces, name tags and voices of several Tepco workers, saying it did not want individuals singled out for blame amid recent reports that some have been targeted for criticism by evacuated residents. Instead, only the identities of Tepco executives who appeared in the company's own report into the accident are revealed.

Kan has said he ordered executives to retain workers at the plant after the company threatened to evacuate all of its employees, believing the situation had become irretrievable. Tepco maintains it had no such plans, but intended to retain core workers to keep the facility stable.

The remainder of the videos will be released at regular intervals through Sept. 7. Journalists have been banned from recording or photographing any of the footage; instead, Tepco has made public a 90-minute video clip.

Teleconference recordings seen by GlobalPost range from notifications of radiation levels and discussions about the operation to cool the reactors, to exchanges that border on the farcical.

More from GlobalPost: After the tsunami, an in-depth look

Yoshida is heard voicing frustration with government safety officials whose technical advice, he said, was inappropriate given the plant's parlous state.

At one point, he complains that he has been unable to contact the prime minister's office. In response, Tepco's HQ asks, "What number can they get you on there?" Yoshida replies, "I gave you that yesterday, but no one has called me yet."

The videos also reveal communication problems between the plant and the government, a poor command of emergency measures by among some workers and, critically, delays in informing residents about the risks posed by leaking radiation.

Yoshida took early retirement late last year after being diagnosed with throat cancer, although Tepco said his illness was not connected to his work. He underwent emergency surgery for a cerebral hemorrhage last month.