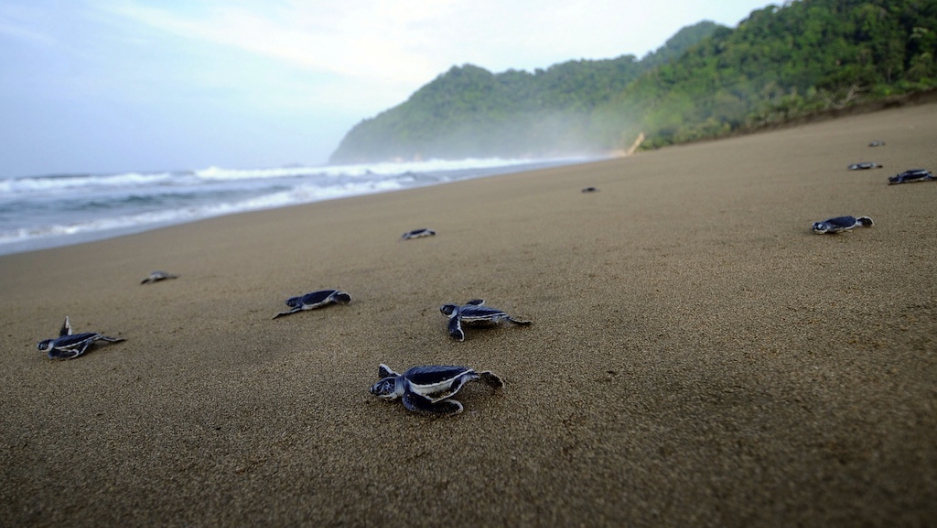 BEIJING, China — Some of China’s brightest “sea turtles” are turning down opportunities in Silicon Valley to make a splash in their country’s emerging tech sector.

After working at top American companies, a growing group of these skilled engineers and managers have returned to help make China’s technology firms world class.

“Sea turtles,” or haigui, is the Mandarin term for overseas-educated Chinese who come home from abroad.

As the number of Chinese students at US universities surged to 158,000 last year, the number of “sea turtles” has also surged, with 135,000 re-entering China in 2010 — a quarter more than 2009 — according to China’s Ministry of Education.

Call it “reverse brain drain.” As America has drastically cut the number of work visas available to foreigners — from 195,000 a decade ago to roughly 65,000 now — more educated foreigners have left the US, taking their skills with them. Most never look back: in a 2011 survey by the US-based Ewing Marion Kauffman Foundation, over 80 percent of Chinese who returned said that there were more opportunities at home than in the US.

The beneficiaries of this trend include companies like Baidu, China’s most popular search engine, itself founded by a “sea turtle,” billionaire Robin Li. The company has repeatedly been voted the most-desirable employer for top Chinese university students, and it has also drawn a number of talented “sea turtles” from Silicon Valley — including alumni of Google and Cisco.

One of them is Fan Li, the executive director of network infrastructure and cloud computing at Baidu. A bright, frank, fast-talking woman, Fan came to the US after graduating from Shanghai’s Fudan University in 1996. She studied briefly at the University of Ohio, and earned a master's degree at the University of Wisconsin, before landing at Cisco.

She worked as a researcher at the networking giant throughout the Silicon Valley boomdays, when Cisco’s stock valuation briefly surpassed any other company’s on Earth. After the bubble popped, she joined Google in the middle of 2002, when it was still a company of only 400 employees. Rising through various engineering and management jobs over eight years, Fan witnessed and aided Google’s immense growth to become the internet giant of today.

Yet in 2010, after having spent a decade building a successful career in northern California, Fan decided to uproot and move to Beijing to take a job with Baidu.

“I figured, if I’m not coming back at this moment, I’m probably going to stay in the US forever,” she says. “I definitely felt like now is the time to contribute.”

Like many “sea turtles,” Fan takes pride in using her deep overseas experience to help China’s rise. Over half of Chinese returnees said that aiding their country’s economic development was a “very important” motivation for their return, according to the 2011 Ewing Marion Kauffmann survey.

For others, better business prospects are the main draw. That was the case for Wang Mengqiu, 37, who was born in Sichuan province and went to the US a decade ago to obtain a master’s degree in computer’s science at UCLA.

While in California, she worked at a Silicon Valley startup producing network routers. Once the bubble burst, however, she decided her opportunities would be better in China, so in late 2002 she and her husband — a fellow “sea turtle” who used to work at IBM — picked up and flew back to China.

Their bet seems to have paid off, as Wang is now the Vice-President of Engineering in charge of all consumer products at Baidu, while her husband is working on a startup to create a Chinese equivalent of Pinterest.

“I don’t think I would get the same opportunities in US, frankly,” Wang says. “Just last month, I went back to Silicon Valley to visit some friends. What I found out is they are doing the same things they were doing ten years ago. Nothing has changed. They are smart people, but they cannot get enough opportunities in the US.”

For cultural reasons, she says, it’s easier for Chinese entrepreneurs to get a business off the ground in China than in Silicon Valley. “We feel safer here,” she says.

Yet the drawbacks of leaving the West to work in China’s tech sector are obvious. The entire country labors behind a so-called Great Firewall of online censorship. Armies of censors comb the internet, deleting microblog postings about Tiananmen Square or Tibet, and all Chinese Internet companies — including Baidu — are under constant scrutiny to filter out results the government deems offensive.

As a result, it’s meaningful to speak of a separate “Chinese internet” that is cut off in myriad ways from the outside world.

Beyond that, Chinese technology companies are still dogged by the reputation for being better at imitation than innovation. Many of the country’s big internet brands are knockoffs of Silicon Valley sites, customized for the Chinese market. Whereas America has YouTube, Twitter, and Facebook, China has YouKu, Sina Weibo, and RenRen.

It may not sound like an appealing environment for veterans of America's free — and freewheeling — tech sector, but Baidu’s “sea turtles” say that China’s tech industry is growing up, and now has something that no one else does: insight into the tastes and quirks of China’s 500 million Internet users.

In fact, Wang says, simply knowing how to cater to this vast, often unsophisticated pool of users requires a great deal of ingenuity. While most innovations still come from Silicon Valley, Chinese companies quickly learn and adapt those ideas to suit the Chinese market, she says.

“That’s a kind of innovation, this process."

And although the quality of China’s programming talent still lags the world's best, Fan Li says their work ethic is outstanding.

“People here work much harder than in Silicon Valley,” she says. “When I managed at Google, I would say, ‘Here’s a task, tell me when you can get it done.’… At Baidu, if [my employees] say ‘This is the schedule,’ and I say, ‘No, cut it in half,’ they will say, 'OK.' People are more self motivated. They put in a lot more personal sacrifice than in Silicon Valley.”

Given the cut-throat competition for good white-collar jobs in China, that is perhaps no surprise. Home-grown talent has a harder time finding work in China than "sea turtles," who are aggressively courted by the government in its "Thousand Talents" program, which offers high-level overseas Chinese tax-free allowances of $150,000 to come home.

Most of Baidu's hires, however, come straight out of college--the winners of an education system in which 30 percent of recent college graduates are unemployed. Fan says this hunger to succeed is what has propelled China's astronomical growth.

“That’s why China is growing much faster than the rest of the world,” she says. “It’s because people work harder.”

Asked if she thought that Chinese companies would soon become a top destination for the world’s best programmers — whether from MIT or elsewhere — Fan Li doesn't bat an eyelash.

“Actually, yes," she says. "You can look at China itself like a big Silicon Valley. People are trying out new ideas everywhere. Many of them will fail, but some of them could become the next Baidu.”