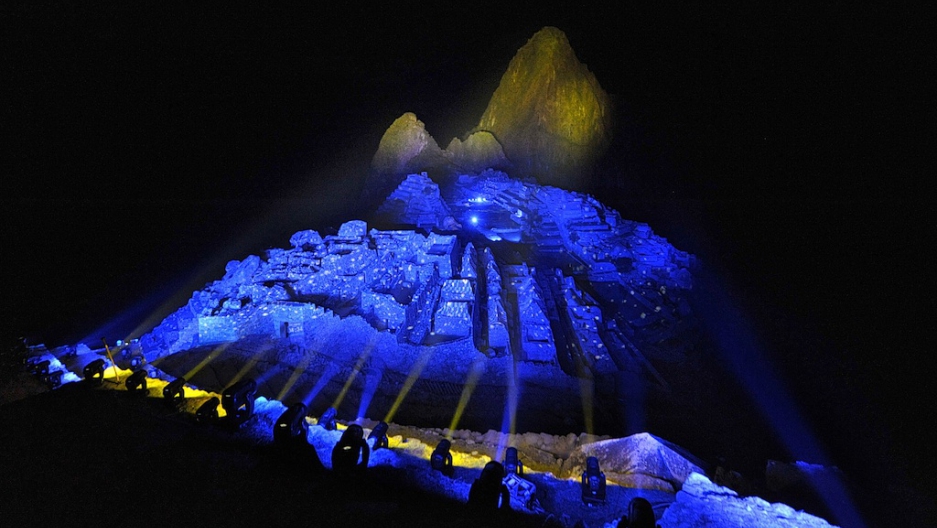 The ruins of the Inca citadel of Machu Picchu are lit with colored light on the evening of July 7, 2011. The complex, which was unknown to Spanish conquerors, is now visited by up to 250,000 people a year.
Credit: Cris Bouroncle
Share

CHACHAPOYAS, Peru — Overrun by cloud forest, Kuelap’s imposing stone walls tower high above the mountaintop, a timeless reminder of the grandeur of a mysterious pre-Columbian civilization.

Built between 900 AD and 1100 AD by the Chachapoyas people, the fortress remains an impressive feat of engineering, given its inaccessible location and that imposing outer perimeter, 60 feet high and some 2,000 feet long.

Like its better-known cousin Machu Picchu, Kuelap is one of Peru’s largest and most breathtaking archaeological sites.

Yet while the world-famous Inca citadel is overrun with tourists, receiving an average of more than 2,000 visitors a day, Kuelap is all but empty.

On the day I visited, at the start of the 2012 high season, there were just three other groups. I spent most of my three hours pottering around the ruins effectively on my own.

Unregulated, chaotic development around Machu Picchu is threatening to mar the site’s haunting beauty, which relies heavily on its stunning natural location. UNESCO, the UN’s science and culture agency, has even warned the Peruvian authorities over their failure to protect Machu Picchu.

Meanwhile, impoverished communities neighboring Peru’s many other archaeological gems desperately need to share in the economic benefits of tourism, which, in 2011, earned the country an estimated $2.7 billion.

“Unfortunately, Machu Picchu is a totem, the icon, for the travel agencies. It is too good a business to pass up,” says Alejandro Camino, Peru director at the Global Heritage Fund, a California-based nonprofit that works to protect archaeological sites in the developing world.

“It is a pity because the pressure is building on Machu Picchu. There are so many other sites that could be of huge interest to Peruvians ignorant about the wealth of their pasts, and also for tourists.”

Depending on the expert you talk to, Peru has between a dozen and 20 other such sites, both Inca and pre-Inca, which rival Machu Picchu in scale and splendor. Yet preparing them to welcome small, sustainable numbers of tourists is a costly business. Many have no road access and first need to be fully excavated and conserved.

He has his work cut out for him. Issues include looting, unregulated urban sprawl, and land-squatting peasant farmers encroaching on historical ruins.

Meanwhile, customs officials at Lima airport seize 100 artifacts every month from travelers attempting to smuggle them from the country.

Varon said the Peruvian state’s total annual budget for archaeology is around 15 million soles (roughly $5.5 million). He has 84 archaeologists working under him but would like 1,500 — a number that would begin to approach the thousands employed by the Mexican government to work on its Aztec and Maya ruins.

He is also quick to criticize Aguascalientes, the tourist trap at the base of Machu Picchu, which attracted the ire of UNESCO. Filled with tacky souvenir shops and overpriced fleapit hotels, the town “should never have existed,” Varon said.

More from GlobalPost: Peru: Can a metropolis die of thirst?

Yet channeling some of Machu Picchu’s 700,000 visitors a year to other corners of this magical, mystical country will require a concerted effort.

After all, it’s not as if the existence of many of these other ruins is a secret. The Lonely Planet guide to Peru even begins its Kuelap section by noting that the site is “matched in grandeur only by the ruins of Machu Picchu.”

The strategy will also require more than new infrastructure, according to Jose Canziani, an expert in the development of archaeological ruins and professor at Lima’s Catholic University.

“It is critical that you involve the local population and that they share in the benefits of developing a site for tourists,” he told GlobalPost. “The communities need to identify with the sites created by their ancestors.”

In total, the country has an estimated 100,000 sites of archaeological interest, according to the government. Yet just under 3,000 are marked or indicated with a sign, and fewer than 200 are protected by personnel or a perimeter fence.

Many are Inca ruins. Yet many also come from the numerous pre-Inca cultures that developed over millennia, and rivaled the variety and creativity of the ancient Mediterranean basin.

Dubbed the “People of the Clouds,” little is known about the Chachapoyas — who never developed writing — other than that they were a warlike civilization never completely subdued by the Incas.

In addition to Kuelap, the ruins and cliff-bound mummies they left behind dot the region, most hidden by thick vegetation, just waiting for intrepid tourists to “discover” them with the aid of friendly locals.

Now, as Peru seeks to showcase these treasures to foreign visitors, the main challenge will be to avoid repeating the mass tourism model that threatens the lush, beautiful landscape around Machu Picchu.