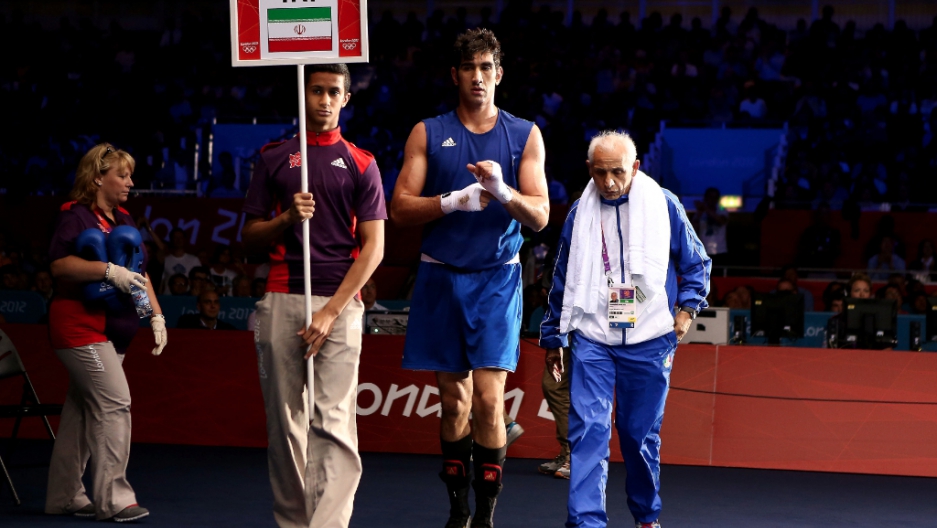 Ali Mazaheri of Iran (L) leaves the ring after the referee's decision of a victory to Jose Gomez Larduet of Cuba during the Men's Heavy (91kg) Boxing on Day 5 of the London 2012 Olympic Games at ExCeL on August 1, 2012 in London, England.
Credit: Scott Heavey
Share

Iranians are furious over the disqualification of one of their Olympic medal hopefuls: champion boxer Ali Mazaheri, who was dismissed by a referee during the games' Wednesday heavyweight bout in a disputed call denounced by Mazaheri as a "setup," reported PBS' Tehran Bureau.

Mazaheri was disqualified for holding his Cuban competitor Larduet Gómez three times within 56 seconds. The call was later reviewed by the International Boxing Association, who suspended the referee in question -- Germany's Frank Scharmach -- for five days, said PBS.

The call itself, though, was allowed to stand, outraging the the 2007 Asian champion's huge fan base as well as the Iranian authorities, who have officially complained, according to BBC News.

Thousands of Iranians have also flooded the London Games' Facebook page with comments about the match, said PBS.

More from GlobalPost: Iran's Supreme Leader Khamenei is on Instagram

"Yet Mazaheri also had a part in this tragedy," opined Ari Siletz at Iranian.com, pointing out that while holding is a minor offense in boxing, Mazaheri should have been more "careful."

"He failed to take into account the fact that on the international scene Iran is usually on the punishment side of the double standard," Siletz wrote. "Whether the regulations deal with boxing or with nuclear technology."

Actually, Mazaheri's temper may have done him in. The angry boxer, vowing that he "could have got a bronze easily if it hadn't been for that [call]" actually left the ring before the referee's official announcement -- according to boxing rules, that makes him unable to appeal, reported PBS. ("He was a weird boxer," Gómez told BBC.)

Turns out it wasn't quite the right way for Mazaheri to pick the fight. Perhaps his fans will have more luck online.

Watch the video of the controversial match here: