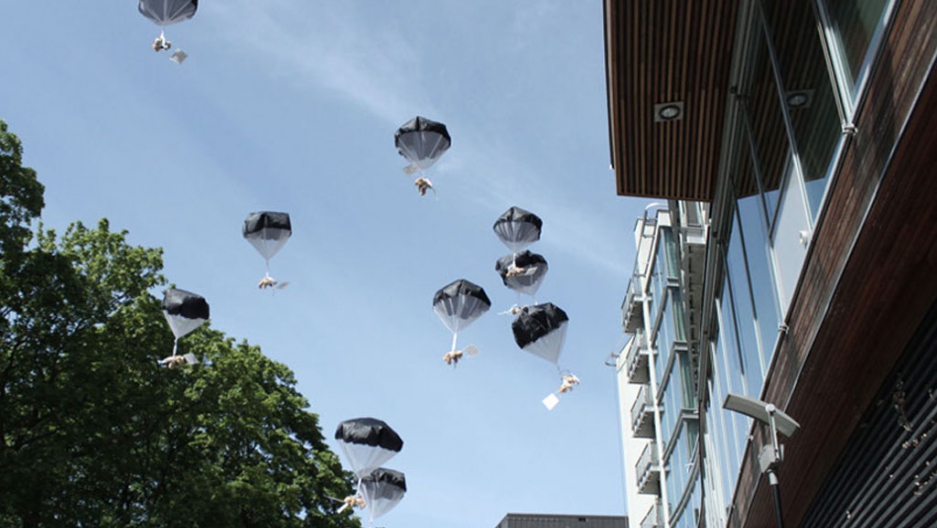 Two activists from Studio Total strapped pro-democracy messages and parachutes to 800 Teddy bears and dropped them on Belarus from an airplane
Credit: Studio Total
Share

The Belarusian government – led by Lukashenko, a man the White House called “Europe’s last dictator” – disagreed, and accused Eriksson of destructive activity and declined to renew his accreditation.

“Eriksson worked in Minsk for about seven years. That’s a long time,” Belarusian government spokesman Andrei Savinykh told the AP. “During that time all of his activities were aimed not at the strengthening of Belarusian-Swedish relations, but at their destruction.”

Earlier this week, reports surfaced that a Swedish advertising agency chartered an airplane and dropped 800 stuffed animals on Minsk.

Two activists from Studio Total strapped pro-democracy messages and parachutes to the Teddy bears before throwing them out of the airplane, which made an unauthorized flight from Lithuania.

Studio Total calls itself an advertising agency, but is equal parts public relations and publicity stunts.

The agency has also burned $15,000 in cash to highlight gender pay differences and called a press conference to announce a sex school in Austria. The school was a fake, but the press responded anyway.

The Teddy bears enraged Lukashenko, who prides himself on military superiority.

He fired two generals and asked why nobody stopped the light aircraft and its bear-a-troopers.

“This plane was discovered in time, but why did the (air defense) authorities not intercept the flight?” Lukashekno said, according to Reuters “Come on lads. We are all grown up. The guilty ones have to answer for this.”

Studio Total’s Tomas Mazetti said they designed the drop to help Belarusians in their fight for greater freedom.

“In Belarus, we think that it is important to have a campaign that makes people laugh,” Mazetti told Foreign Policy magazine. “The people in Belarus know that their leader is this frightening, imposing man – they don't need to be told this.”

More from GlobalPost: EU pulls all diplomats from Belarus