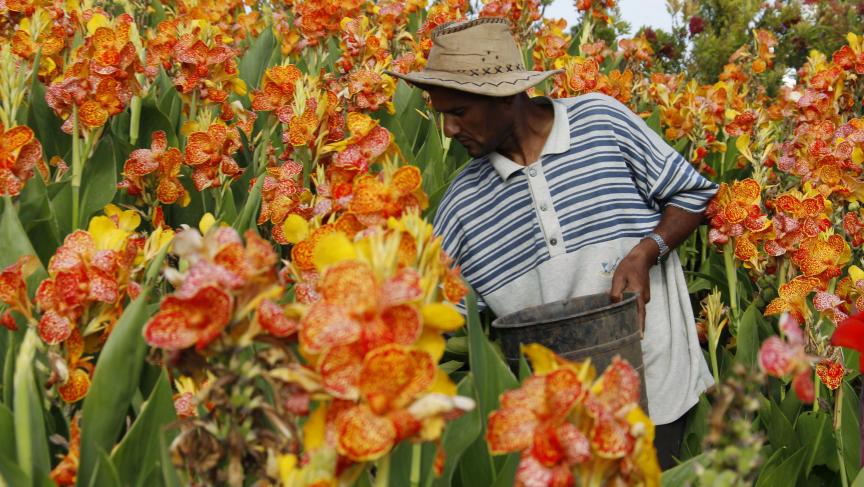 A Syrian farmer living in Lebanon works on flower for sale at a plantation in Qasmiyeh in southern Lebanon May 22, 2012. Syria's facing an agricultural crisis because its crops are being destroyed and farmers, like this man, have fled the country. (P

As if the violence and civil war in Syria isn't enough, a new menace faces the people of Syria.

Farms and crops are being abandoned because of the fighting; and the specter of widespread hunger looms over the war-torn nation.

An assessment published Thursday by the United Nations Food and Agriculture Organization and the World Food Program says three million people in Syria need food assistance to get through the next six months.

Caroline Hurford, a spokesperson for the World Food Program in London, says the situation is very serious and it will be difficult to get aid to some areas, given the security situation.

"Major affected crops are the strategic crops, such as wheat and barley; fruit and other trees (cherry, olive,

other fruits, ornamental trees) and vegetables in the 9 governorates. Rise in fuel costs and unavailability

of labor force have forced the farmers either to abandon farming or let the standing crops unattended," the report says.

It goes on to say that in addition to the drop in food production, there are also problems with distribution network.

Irrigation systems have also been damaged.

Even worse than the farms, though, is the livestock industry.

"The hike in fuel, fodder and concentrated feed prices has forced the herders and small families to sell a part of their flock at reduced price to meet their growing expenditures. Herders reported to have some of their livestock killed or stolen during the crisis," the organizations found.

According to the report, over the next 12 months, Syria will experience some $27 million in agricultural damages and more than $1.7 billion in lost revenue. The U.N. organizations estimate there is a short-term need for about $477 million in aid.

With the resignation of Kofi Annan earlier this week, though, hopes for a peace agreement in Syria grow dimmer every day.