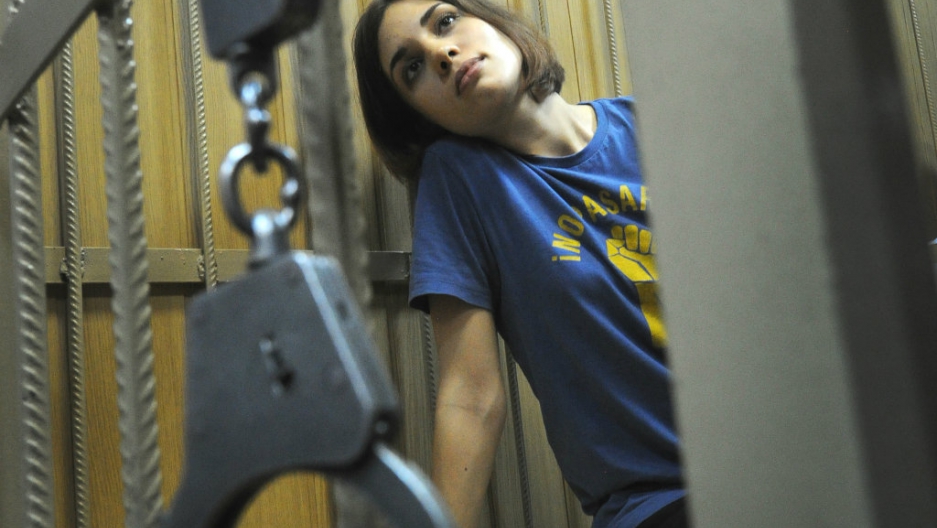 Nadezhda Tolokonnikova, a member of female Russian punk band Pussy Riot, sits inside a defendants cage in a Moscow court during the hearings on the Pussy Riot case.
Credit: Alexander Nemenov
Share

The trial in Russia of three members of a punk rock group, Pussy Riot, has brought renewed attention to the role of musicians in politics. GlobalPost looks closer at six political acts of music.

In Russia, three members of the anti-Putin punk-rock band Pussy Riot are on trial for "hooliganism." Their crime? Performing songs like “Holy Shit” and “Virgin Mary, Redeem Us of Putin,” in the Christ the Savior cathedral, Moscow’s largest Orthodox church.

Band members Maria Alekhina, Ekaterina Samutsevich and Nadezhda Tolokonnikova have a history of using music to protest the Russian government. The group's Christ the Savior performance only lasted five minutes, but it was merely the latest in a series of punk protests. Pussy Riot has also been known to give quick political performances in the Moscow Metro and Red Square.

As GlobalPost’s Gregory Feifer has noted, Pussy Riot isn’t just a band. The group has become emblematic for Putin opposition both within Russia and abroad. Maybe it’s the Pussy Riot's punk sound, brightly colored outfits, invasion of the sacred—Putin and the church—or all of the above, but Pussy Riot has become a symbol of rising opposition, and the continued abuse members have experienced at the hands of the government only makes Putin seem weaker.

Watch them perform below:

Plastic People of the Universe

Influenced by Frank Zappa and the Velvet Underground, Plastic People of the Universe (PPU) played experimental, avant-garde rock to the eternal disgust of the Czech communist government.

On September 21, 1976, they went on trial for insisting on playing their songs and generally dressing like hippies. Or, if you want to be technical about it, for an “organized disturbance of the peace” that was corrupting Czech youth with its “anti-social phenomenon.”

The four members of the band were sentenced to eight to 18 months. But their plight became more a matter of politics than music—the Czech intelligentsia got involved, including playwright, poet and future Czech president Vaclav Havel.

In response to the conviction, Havel helped create Charter 77, a landmark civic initiative that examined the government’s human rights violations and constitutional hypocrisy.

As for PPU, Havel noted that, “There was disturbing magic in the music, and a kind of inner warning. Here was something serious and genuine, an internally free articulation of an existential experience that everyone who had not become completely obtuse must understand.”

Arlo Guthrie had a tough act to follow. His father, Woody Guthrie, also sang folk songs about social and political unrest. Although he wrote tunes about the Dust Bowl and the Depression, Woody was the voice of the 60s.

But Arlo became the voice of the anti-Vietnam protests. The song that did it? “Alice’s Restaurant Massacree.”

Arlo doesn’t so much sing as talk, and most of the political message is couched in humor.

That might not sound like the perfect mixture to instigate political upheaval, but Arlo manages to weave together a captivating tale of Thanksgiving Day 1965. The song—based on a true incident—details being arrested for littering, and how an American citizen could be conscripted to fight in the Vietnam War for even crimes that minor.

It not only inspired a movie and helped Arlo land a spot at Woodstock, but has also remained popular as a song of political dissent. It has been updated several times, including to protest former Presidents Ronald Reagan and George W. Bush and the Iraq War.

Still don’t believe this folk song could be the right recipe for dissent? Check it out for yourself:

The Clash was not only a punk rock band that played with reggae, ska, rap, dub, funk…ok, just about everything, but also a political protest machine.

The British band’s lyrics are filled with leftist politics. Take Sandinista!, an album named for the Sandinista National Liberation Front, a group of left-wing rebels who overthrew Anastasio Somoza Debayle, ending the Somoza dynasty in Nicaragua. Or “Career Opportunities,” a song that protests the limited options for the British poor as well as the British government’s apparent disinterest in their fate. Or “The Call-Up,” which criticizes the US draft.

The Clash were in league with leftist political groups such as the Anti-Nazi League. British music news magazine NME famously called them “the thinking man’s yobs”—a British slang term for a thug or a working class person. And in 1976, they played at the Rock Against Racism concert, organized in response to growing white nationalist groups such as the National Front. The concert set up a counter to musicians such as David Bowie, who at the time was quoted in Playboy for saying that Adolf Hitler “was one of the first rock stars,” and that Britain was “ready for a fascist leader.”

Bowie later retracted his statements, but at the time The Clash served as evidence that musicians ran the full political gamut. They were angry, musical, and all about the common man.

Watch them perform at Rock Against Racism:

Sometimes, the music gets away from you. The following is less a story of intentionality and more of a song transforming itself into a piece of protest, regardless of one’s own political agenda.

It might be the French national anthem, but “La Marseillaise” by Claude Joseph Rouget is distinctly revolutionary. It was originally titled "Chant de guerre pour l'Armée du Rhin," or “War Song for the Army of the Rhine” in 1792, but was renamed because it became so popular with volunteers in Marseille.

Royalist Rouget (who later got the guillotine) wrote the song to inspire French troops fighting against Austria, and it was picked up as an anthem of the French Revolution.

Since then, it’s become a revolutionary staple. Napoleon, Louis XVIII and Napoleon III all banned the song for its revolutionary associations. It was even sung in China at the Tiananmen Square protests.

Revolutionary or royalist? Decide for yourself:

No list of musical, political protest would be complete without Woodstock, “3 days of peace and music” as its poster proclaimed.

In 1969, Michael Lang, John Roberts, Joel Rosenman and Artie Kornfeld put together an event that captured the 60s. The original plan was to make money, but it soon became clear that Woodstock was drawing in hundreds of thousands of people—far more than they had prepared for—and took on a life of its own as a massive crowd of over half a million took over the 600-acre farm.

Joni Mitchell called Woodstock a “spark of beauty,” a place where people “saw that they were part of a greater organism.”

What was Woodstock protesting? Violence, in all forms. It was a pro-peace movement.

In the words of Richie Havens, who played at the festival, “With everything that was going on in the late 1960s -- the war in Vietnam, civil and human rights issues, the Rev. Martin Luther King Jr.'s assassination -- we rallied and relied on strength in numbers. We came together communally to be heard and to be acknowledged.”

The most famous moment, perhaps, was Jimi Hendrix’s closing song, a psychedelic rock version of the “Star-Spangled Banner.” Like Pussy Riot, Hendrix took something considered sacred and altered it, moving it both musically and politically into the future.