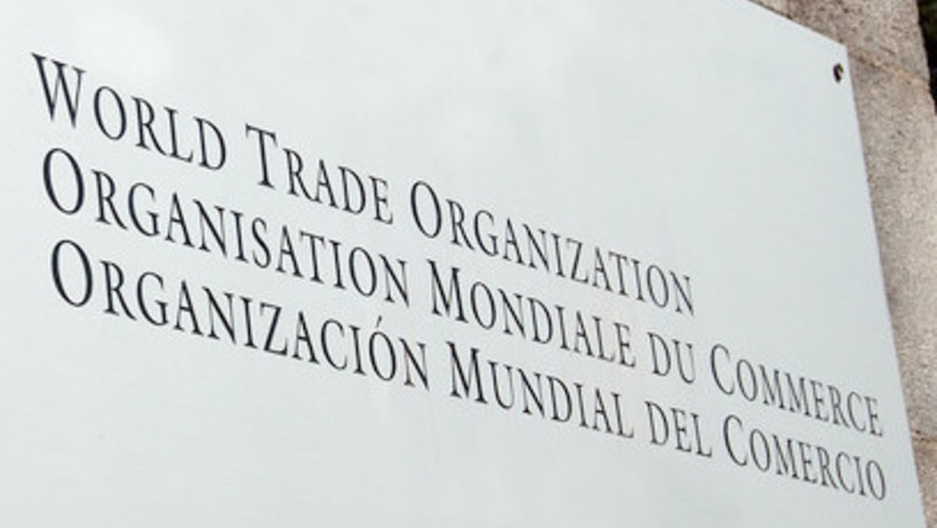 Share
After trying for some two decades, Russia will join the World Trade Organization, or WTO, later this month. For the Kremlin, it's a hugely symbolic moment. Russia has joined the club. Russia's entry to the WTO should make it easier for nations to trade with them. By some estimates, the US could double its exports to Russia in the next five years. But there's a catch: A Cold War law remains on the books, which prevents normal trade relations between the two countries. It's a law that many US businesses, ranchers and farmers want removed immediately. American Unions want Congress to take a tougher stance with Russia. The World's Jason Margolis has more. To understand why US companies won't be able to trade freely with Russia anytime soon, we need a brief history lesson. In the 1970's, Soviet Jews, many of whom faced persecution, were prevented from emigrating from the USSR. Svetlana Boym was one of them. She's now a professor of Slavic and Comparative Literature at Harvard University. BOYM: "I was born in Leningrad, now St. Petersburg. I came to the United States as a refugee. The reason I was able to enter the United States and exit the former Soviet Union was thanks to the Jackson-Vanik Amendment." The "Jackson-Vanik Amendment" was passed by Congress in 1974. The Amendment denied equal trading rights to countries restricting emigration. It was designed to put pressure on Soviet leaders to open their borders. Many argue it worked. Some 1.5 million Soviet Jews were able to leave. BOYM: "And among them, was the family of Sergey Brin, the founder of Google, many Nobel laureates, poets, artists and just ordinary citizens who wanted to change their lives drastically." Russia no longer restricts emigration the same way. But, nearly four decades later, in America, the Jackson-Vanik Amendment remains in place, and is a technical barrier to full, normalized trade. Lukyanov: "So to have Jackson-Vanik Amendment now, it's a comedy. It's absolutely absurd, it's totally ridiculous." That's Fyodor Lukyanov, editor-in-chief of the journal, "Russia In Global Affairs" in Moscow. Many American businesses agree with Lukyanov. They argue that the Jackson-Vanik Amendment puts them at a competitive disadvantage to other nations, and the Cold War law doesn't serve any practical purpose. Svetlana Boym says that may be so, but the spirit of the Amendment remains important. BOYM: "Yes, we've moved beyond the Cold War, but it does not mean that there is no return to authoritarian practices. The situation now has worsened in Russia, and you wonder if you really need something legal now to preserve the gains." Many members of Congress feel this way. They've come up with an idea: repeal the Jackson-Vanik Amendment and replace it with a new law, one that targets human rights abuses in Russia today. The legislation now working its way through Congress is called the Sergei Magnitsky Act. BROWDER: "…which was named after my lawyer, Sergei Magnitsky, who was arrested by corrupt officials in Russia about three years ago and then slowly tortured and killed in a Russian prison at the age of 37." Bill Browder is the founder and CEO of Hermitage Capital Management in London. Not long ago, Browder's fund was the largest foreign investor in Russia. And he didn't like the way the Russians were doing business. BROWDER: "When we started to invest in the companies and do the research into what was going on in the companies, we discovered that in almost all the companies, they weren't earning any profits, because all the profits were being stolen by the oligarchs and management teams." Browder went on a campaign to expose the fraud. In 2005, he was detained at the Moscow airport, declared a threat to national security, and expelled from Russia. Browder supports the new Magnitsky Bill, which would impose visa sanctions and asset freezes on certain Russian officials. BROWDER: "This is the only leverage we have in the West dealing with really horrific things that are going on inside Russia. We're talking about gross human rights abuses where journalists, opposition figures, whistle blowers and other types of people are being arrested, tortured and killed. Russians don't respect anything other than leverage, and we have it, and we should use it." Here's what the Russian government thinks about the Magnitsky Bill, says Fyodor Lukyanov. LUKYANOV: "(The) official reaction is extremely negative. It is seen as a very clear intervention in Russian domestic affairs and an attempt to put pressure on the Russian state, because those who are in the list are officials, they are public servants." Russian President Vladimir Putin has said Russia would retaliate if the Magnitsky Bill is passed. But Fyodor Lukyanov says human rights activists and some Russian journalists have welcomed it. Svetlana Boym at Harvard has also heard this from journalist friends in Russia. Boym believes Russia would benefit from the Magnitsky Bill. BOYM: "It would send a very important message to the Russian state, but also would be a kind of, some mode of protection, hopefully, for the Russian legal community and journalistic community, which is now in great danger." But the Obama Administration has been less than enthusiastic about the Magnitsky Bill. They worry it could do damage to an already testy relationship between the two nations.