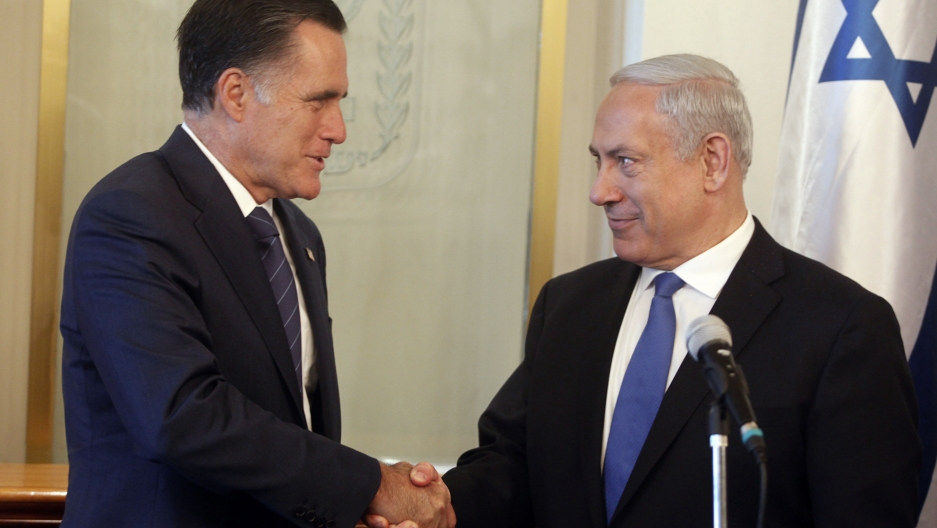 Mitt Romney flew to Poland Monday, the last stop on his foreign tour, with some extra campaign cash in his pockets.

The GOP presidential hopeful held a fundraising breakfast in Jerusalem where he reportedly pulled in about $1 million. Couples paid $50,000 each to attend the event.

Romney spent the weekend in Israel, where he got an enthusiastic welcome from the Israeli government. But for some Israelis, it was a little too enthusiastic.

Prime Minister Benjamin Netanyahu greeted Romney Sunday. They made a brief — and rare — appearance in front of the cameras, and the two men went straight to the subject of Iran's nuclear activities.

In a comment that could be seen as pointed criticism of the President Barack Obama’s efforts, Netanyahu said sanctions and diplomacy had not slowed down the Iranian program. But he had high praise for Romney’s views on Iran.

"I heard some of your remarks a few days ago," Netanyahu said. "You said, 'the greatest danger facing the world is of the Ayatollah regime possessing nuclear weapons capability.' Mitt, I couldn't agree with you more."

The two men appeared to have agreed on a lot. When Romney gave a speech Sunday in Jerusalem, the left-leaning Israeli newspaper Ha'aretz said the voice might have been Romney's but the words could have been written by the prime minister's office.

"In general, Netanyahu embraced Romney as no Israeli prime minister has ever before embraced a candidate running against an incumbent U.S. president," reporter Barak Ravid wrote. "Aside from their working meeting in the morning, Netanyahu also hosted Romney and his wife and sons for dinner at his official residence."

Yossi Sarid, a former Israeli cabinet member and former leader of the liberal Meretz Party, agrees with Ravid’s assessment. He said Netanyahu's embrace of Romney amounted to a robust political endorsement of an American presidential candidate, a dangerous line to cross.

"I regret the fact that Mitt Romney appeared on the Israeli stage as the next president of the United States," Sarid said. "And I don't think it's fair as far as Obama is concerned. I believe it will function as a boomerang, regardless of the results of the elections."

Sarid said Israel needed all the friends it can get, especially in Washington. And any government here in the Jewish State, the thinking goes, should not be putting the U.S.-Israel alliance at risk by betting on one political candidate or another.

But Shmuel Rosner of the Jewish Journal said that was reading too much into Romney's visit. It was hardly secret, Rosner said, that Netanyahu disagreed with Obama on some things.

"I don't think Netanyahu intended to endorse Mitt Romney," Rosner said. "I think that no matter what Netanyahu says or does, most people would assume that he wants Romney to become president."

The Israeli public would prefer to see Romney in the White House as well, Rosner added. Even if Romney's speech showed — on substance — that the GOP candidate's foreign policy positions were essentially in lock-step with Obama's.

"Most of the things Romney said yesterday, Obama can also say,” Rosner said. “That Romney considers Israel to be an ally, that he promises to support Israel's security, to always side with Israel, these are all things that Obama can also say."

"But for some reason," he added, “there are listeners who would believe Romney more than they believe Obama."

Rosner said Romney's visit to Israel was not about winning over Israelis; it was about projecting the image of a candidate dealing with serious foreign policy issues in a complicated part of the world. And it was about playing to the Republican base back home, especially Christian Evangelicals, Rosner said.

Rosner pointed out that Romney's conversation with Netanyahu about Iran might have some significance in the longer term if the candidate wins the election. But in the short term, it's the Obama administration that will be having the most important conversation with the Israeli prime minister.

U.S. Defense Secretary Leon Panetta is visiting Israel this week and is expected to meet with Netanyahu to talk about Iran's nuclear activities.

But Romney might have been equally interested in winning over wealthy Jewish-American donors. He spoke to about 40 of them at Monday's fundraising breakfast.

Reporters were barred from the event. But Romney made some news anyways. He was quoted by the Associated Press saying the disparity between Israel's per capita GDP and that of Palestinians living under the Palestinian Authority in the West Bank was about a difference in culture. Romney also seemed to suggest that divine intervention had a role to play in the income gap.