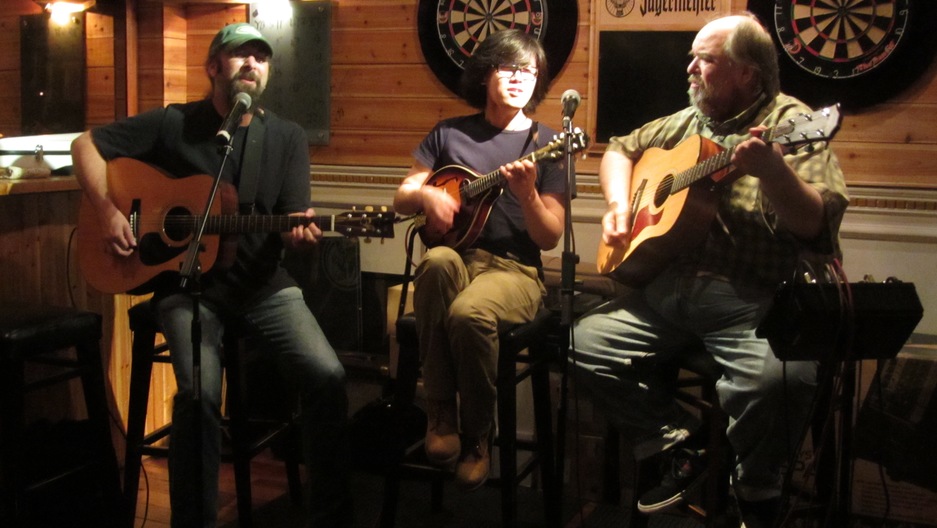 Share
Tom Pang, or Pang Zhi Peng, is a 28-year-old, shaggy-haired ethnic Mongolian. He grew up playing classical violin, but then (to the dismay of his father who wanted his son to play in an orchestra) he fell in love with bluegrass. Adam Brooks Dudding is a Nashville singer-songwriter and sometime bluegrass flat picker. He's in Shanghai for now and plays regularly with Pang. He says bluegrass and Mongolian music seem to come from a similar emotional landscape. "Bluegrass, there's that high lonesome sound, that country feel, where it's kind of wide-open," Pang's other comrade on stage at a bar in Shanghai is guitarist Jeff Davis. Davis moved from California to Shanghai about five years ago. He says he's played rock, swing, even punk polka over the years and liked how open and fresh Shanghai's music scene was. Then he heard about a couple of Mongolians called Tom & Jerry, who played bluegrass. He especially connected with Tom. "Meeting Tom and playing with Tom made me think seriously about staying here," Davis says. "He has gotten so much better, but even when he was just four years out of Inner Mongolia, he had musical ideas that were really good." Pang is experimenting with fusing that bluegrass sound with the music of his homeland, including the almost unearthly sound of throat singing. Pang and Dudding call it "New Grass," but Pang is quick to admit, he's not the one who came up with the idea of merging bluegrass and Mongolian music. "You know Bela Fleck? He did this a long time ago, bluegrass music and Mongolian music," Pang says. "For me, I just want to try to make different things." It's a nod to the part of him that's Mongolian and the part that's Chinese. Jeff Davis says it's a connection to those origins that seems to be driving Pang's musical ambitions these days. "His dream before was to go to the US and be a bluegrass player there," he says. "Now, I think his dream is bigger. He wants to bring bluegrass to a Chinese audience and get them to appreciate it." It's also to bring the music back to Mongolians, to let them hear their rhythms, infused with bluegrass, and see what happens. The first stop next month is Inner Mongolia, which is a province of China. And later perhaps the windswept steppes of Mongolia, the country, the place that gave birth both to Genghis Khan and to the ancient music that's giving bluegrass a new twist.