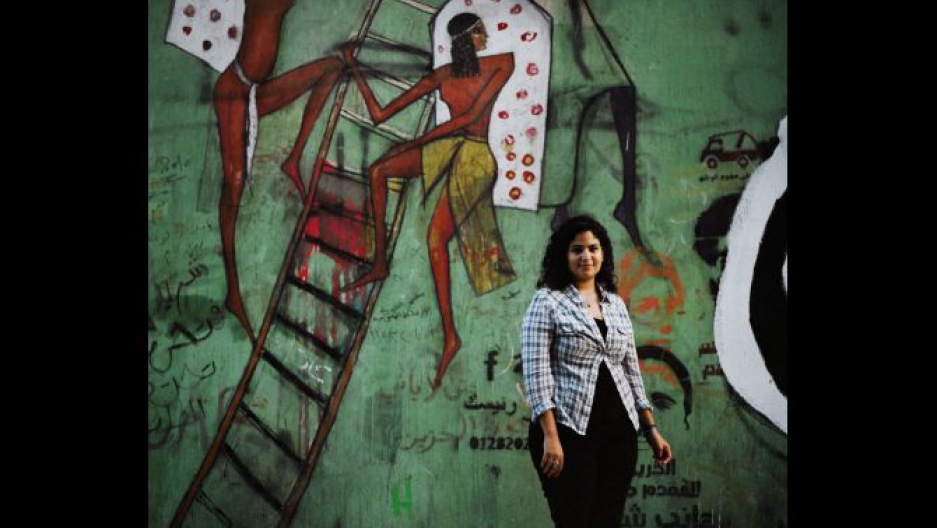 Mariam Kirollos, an activist, stands in front of murals on Mohamed Mahmoud Street, just outside Tahrir Square in Cairo in May 2012.
Credit: Elizabeth D. Herman
Share

Kirollos’s animated face is framed with thick black curls that sway as she speaks zealously of the change that echoes throughout her life after last year’s January 25 revolution.

She is driven by the rhythm of music, she believes in a woman’s right to be treated as a human being and she likes chocolate.

When friend and fellow revolutionary Nour Ayman Nour called and invited her to join Freedom Beats, a band that provided a soundtrack to the revolution.

“I had no idea my first march would be six hours long, and my fingers would bleed by the end of the day,” she said with a smile of slight regret.

Kirollos drums in spite of preconceptions that a drum is only to be held by men. The young musician, 22, has been the target of ridicule for drumming down Cairo’s streets, but seeing more and more women drawn to the band keeps her going.

“Drumming is revolutionary,” she says, punching the air lightly with her little fist.

She is a feminist, she says in hushed tones, as if hating the need for such a label to exist. “I believe in the right of women to be treated as human beings.”

Of the many marches Kirollos has joined, one memory emerges as the “drumming moment,” she says. At the International Women’s Day event in March, a fully veiled Muslim woman, identified by Kirollos as Sabah Ibrahim, fervently chanted for equality among Egyptians of different faiths.

Kirollos, a Coptic Christian, immediately put a beat behind this woman’s chants.

Kirollos and Sabah, who is 52, have been friends ever since.

“She is the icon of the revolution,” Kirollos says. “She’s the one who needs bread, freedom and social justice.”

In the eyes of the young drummer, the icons of this revolution haven’t been adequately portrayed in the media. The anonymous, faceless fighters on the front lines are the real icons, Kirollos says.

These faces, often covered in masks and goggles and scarves, sometimes all at once, belong on magazine covers, she says. It may not be pretty, but this is how an Egyptian looks.

Infused with conviction, Kirollos says the revolution shed a new spotlight on the strength of women who’d actually been working for years on achieving social equality.

“Women were on the front lines … picking tear gas canisters up and throwing them right back at police forces,” Kirollos says with pride.

At a protest against sexual harassment in front of the Supreme Court in early May, Kirollos chanted, “harassment will not do you good, try again and we’ll cut of your hand.” (which sounds more romantic in Arabic). Sexual intimidation and abuse is a prevalent trend marring women’s walks on the streets of Cairo.

For Mariam, it’s never really about promoting violence. It’s merely about urging women to believe that they are not weak.

The young revolutionary speaks over the many conversations at the downtown Café Riche, where the setting is positively vintage and the lighting dim, remembering one of her favorite revolutionary chants: “A woman’s voice is not a sacrilege, it is a revolution, a revolution.”

Mariam Kirollos indulgently sips her tea; mint leaves swirling around, and says she likes mint with everything. She says she finds “hope in the smallest of things.”

Walking down the street recently, the curly haired drummer catches a glimpse of a spray-painted wall, like so many other walls have been around Cairo since the early days of 2011. The piece of graffiti that she says changed her outlook on life read, “Be realistic, and demand the impossible.”

She says the revolution has yet to achieve some of its biggest goals, but has fulfilled a more silent demand of Egyptians, once deemed impossible: “The breakage of the chains of fear within us.”

She pauses. “On the 25th of January, my friends expected that there would only be seven people in Tahrir,” she reminisces, unable to control a smile, and then a giggle. “And the fact that they were not seven, the number was increasing to millions, you know, it’s very inspiring.”

Kirollos regrets leaving Tahrir Square on February 11, when Hosni Mubarak stepped down, which turned out to be a premature end to the revolution. But she has been going back, both with her drum and without it, to participate in the still-unfolding change.

Before January 2011, Kirollos would never skip out on an opportunity to travel. Now’s she thinks twice before packing her bags. She wouldn’t want to skip the action.

Her parents on the other hand, would wholeheartedly welcome any chance for their daughter to miss out on the action.

“We come from different generations,” Kirollos says, one of many revolutionaries whose parents have struggled to come to terms with the reckless passion of their sons and daughters.

Thousands protestors would come face to face with death on mini-battlefields and were unable to face their moms at home.

But, gradually accepting her musical activism, her parents went from trying to keep her in the house during the initial 18 days of the revolution to being proud of her.

And now Kirollos’ drum sits proudly at home when it’s not in her arms on the street.

“I don’t hide it from them, they know what I’m doing,” she says. “They’re slowly starting to accept who Mariam is.”