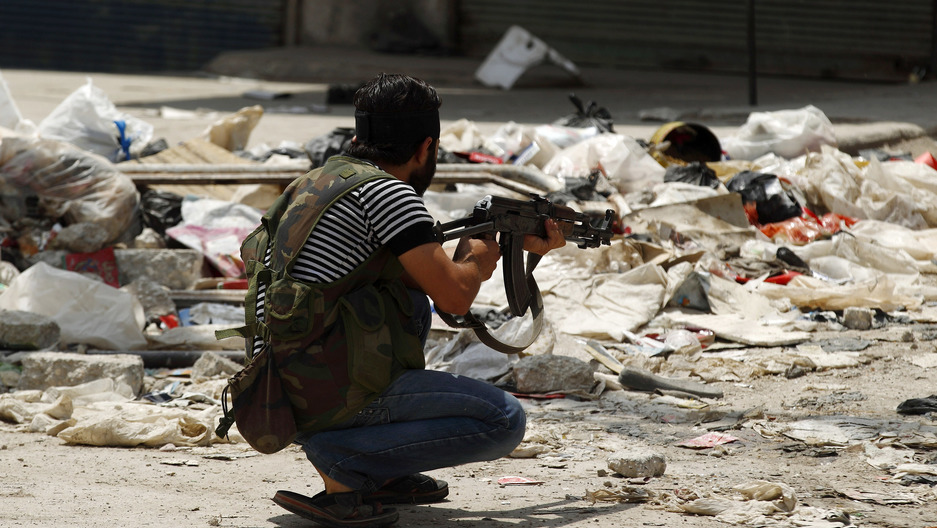 The fighting in Syria has flared up in the city of Aleppo, where scores of civilians are beginning to flee constant shelling.

Government forces have launched an offensive there, relentlessly shelling many neighborhoods of Syria's second-largest city. The United Nations, which Wednesday afternoon reported its peacekeepers were fired on by government tanks, estimates that 200,000 of the city's two million inhabitants have evacuated the city as violence escalates.

On Saturday, rebel forces managed to stave off a ground assault by the military in Aleppo, earning a brief reprieve from the fighting. According to The New York Times, Syrian rebels on Monday managed to secure a vital checkpoint on the road to Turkey, potentially opening up a route for resupply in the ensuing battle. With Syria's airpower, however, it remains unlikely the rebels will be able to hold their new ground.

Babak Dehghanpisheh, a special correspondent for the Washington Post, said this rebel victory could lead to a resounding defeat of local civilians.

"We're going to see a lot of neighborhoods ruined, and a lot of civilians potentially being killed," Dehghanpisheh said.

Helicopter gunships and fighter aircraft have been seen sweeping the city as government forces prepare to repeat the strategy they employed in Damascus — overwhelm the opposition through superior firepower.

The BBC's Ian Panell, who is embedded with the rebel forces, said the truth is the rebels are only lightly armed, at best, despite reports of capturing a small number of government tanks.

"They can skirmish, but they can't resist overwhelming force," he said. "The mood here is unbelievably tense."

Mortar and artillery fire persist throughout the day and night, and traffic in and out of Aleppo has slowed to a trickle. The only vehicles on the highways are packed with families trying to escape.

In anticipation, approximately 10 percent of Aleppo's population has fled the city. Many are seeking shelter in neighboring countries like Jordan, Turkey, and Lebanon.

"It's a clear sign that the fighting is ramping up," Dehghanpiseh said. "In Damascus, we were seeing the same thing. There were thousands of people who fled the heavy fighting in the past week."

Some 25,000 to 30,000 Syrians crossed the border into Lebanon in the days leading up to fighting in Damascus, he said.

Turkish officials report that a total of 70,000 refugees have sought shelter in Turkey, but some 26,000 have returned to Syria. While there has been tension in the refugee camps, stemming from a combination of food shortages and the mandatory fasting during Ramadan, the situation overall is stable, Dehghanpiseh says.

"(The Turkish government has) managed to actually house the refugees and care for them quite effectively so far," he says.

The Jordanians has been less prepared to provide shelter and care, but opened its first refugee camp this week.

"Reality has pushed us to open this camp," Interior Minister Ghaleb Zoubi said Sunday. "We've hosted Syrians in our homes, in even larger numbers than where they have been housed in holding centers," he said. "This has created a pressure on Jordan, especially given the water and electricity shortages we face."