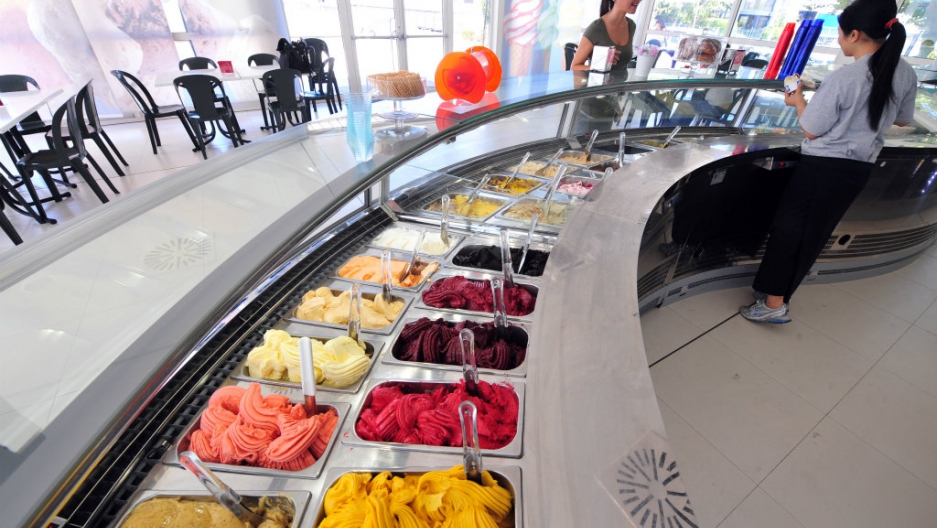 A student serves ice cream during a course at the Gelato University at the Bologna headquarters of Carpigiani, a manufacturer of ice cream-making machines.
Credit: Giuseppe Cacace
Share

ROME, Italy — Italians are expecting the opening of their country’s first ice cream museum, but forget any ideas that gelato, as it’s called here, is frozen in the past. A new wave of iconoclastic ice cream makers is revolutionizing the scene in Rome with flavors such as gorgonzola, mushroom and lobster with vodka.

"There are no limits," says Claudio Torce as he hands over a scoop of habanero chili-flavored gelato at the headquarters of his ice cream store company in the modernist EUR neighborhood in the south of the city.

"We’re working toward a future where gelato is no longer identified purely as something fresh and sweet for summer."

Torce has become a major influence on Rome's new gelato generation since he opened his first shop in 2003.

At the launch of his eighth outlet in Rome this month, ice cream was served with a selection of savory antipasti: spicy salami with pear salad accompanied by scoops of gelato flavored with celery, parmigiano and those picante habanero peppers.

In the new museum, due to open in Anzola Emilia, near Bologna this fall, exhibits will include a recipe for black truffle gelato dating from 1808.

Established by Carpigiani, a company that manufactures ice cream machines, the museum will trace the history of the cold stuff from the days when teams of runners delivered mountain snow for chilling wine at ancient Mesopotamian banquets.

The Italian architect Bernardo Buontalenti is credited with inventing modern gelato during the Renaissance by adding cream and eggs to traditional water-ices.

Gelato has been a big deal here since, and especially this summer, when temperatures have reached the high 90s. The daily newspaper La Repubblica reported on the museum’s upcoming opening under the headline, "The coolest museum of all."

Italian media have also reported on a growing fashion for ice cream for dogs — an idea that originated in Atlanta but is taking off here — and on gelato as an antidote to the economic crisis.

That’s because Italians spent over $2.4 billion on ice cream last year, roughly $100 per family, according to a study by Confartigianato, an organization that represents small businesses. That's an increase of 2 percent from 2010.

Demand for gelato is even healthier this year despite Italy’s slide into recession. The Italian ice cream makers' association says sales this spring were up 7 percent on last year.

"Ice cream doesn't cost much,” Torce says, “but for two euros, you can get five minutes of joy, so things are going well despite the crisis.”

The attractive business prospects are generating new would-be ice cream entrepreneurs, some of whom attend the Carpigiani Gelato University, set up in 2003 by the same people behind the museum. Some 12,000 people attended its courses last year, double the previous year's number.

Many dream of emulating Guido Martinetti and Federico Grom, who were in their 20s when they started making luxury gelato using traditional methods and natural ingredients 10 years ago. Today, the Grom empire has a turnover of $36 million and more than 50 outlets in New York, Tokyo and elsewhere.

Although the best Italian ice cream may be very good, however, Torce complains that only a handful of Rome's almost 2,000 gelateria are filling their cornetti and copetti with top-quality gelato. But that’s begun to change since the influential founder of Italy's slow food movement, Carlo Petrini, denounced the sorry state of the country's ice cream a decade ago.

Torce praises the San Crispino store near the Trevi fountain for launching Rome's gelato renaissance even earlier in 1995.

Among the new generation of gelato makers, Fatamorgana produces such flavors as black rice with rose buds, baklava, and fennel, honey and licorice.

Vice, another ice-cream company whose main store behind the Vatican is decorated to resemble an ice cave, uses protected-origin products such as Langhe hazelnuts and Amalfi lemons, and offers savory aperitivos that feature olive-oil gelato served with raw shrimp.

Despite all the bright news for their ice cream, however, Italians were disappointed by at least one development: this year's gelato festival in Florence, which some consider the world championship, was won by a Canadian.

James Coleridge from the Bella Gelateria in Vancouver scooped the top prize with a recipe for pecan and maple syrup ice.