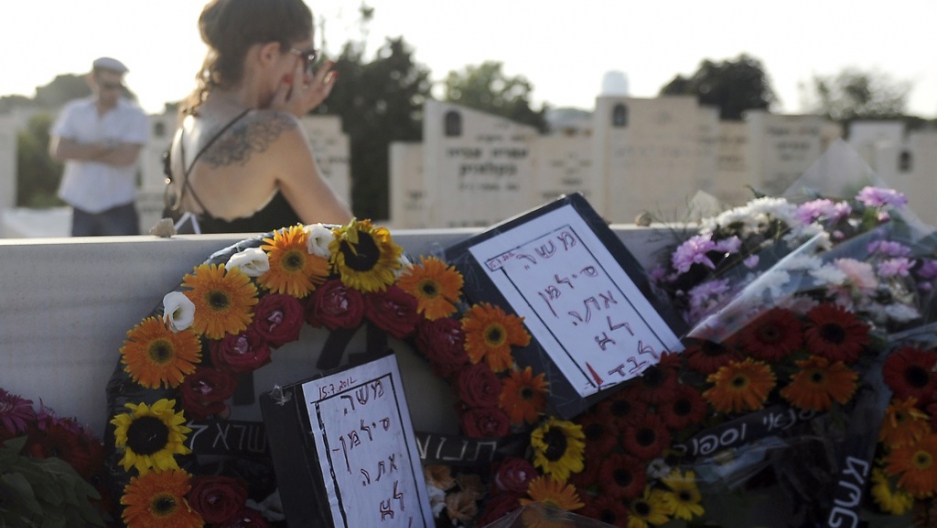 An Israeli woman walks past the grave of Moshe Silman during his funeral in the city of Holon on July 22, 2012, following his death from severe burns after he set himself alight during a social justice demonstration on July 14.
Credit: David Buimovitch
Share

JERUSALEM, Israel — The second half of July has exposed Israelis to a new and horrifying phenomenon: desperate but mainstream citizens choosing, again and again, to end it all through fire.

So far, there have been seven attempts in the last two weeks, and numerous threats. One man is dead, another clings to life.

The first one came on July 14 at a large Tel Aviv rally commemorating the first anniversary of the Israeli Occupy movement. Moshe Silman, a badly indebted Haifa resident entangled in what the daily newspaper Ha'aretz called "a bureaucratic nightmare," distributed flyers to a few people around him, doused himself with lighter fluid and struck a match.

He was burned over 90 percent of his body. The social justice movement, of which he was a part, waited out the eight-day vigil in shocked silence until he died.

The idea of a man ostentatiously setting himself aflame is so alien here that many Israelis, and it would appear their entire government, have found themselves helpless and unsure how to react.

"Taking one's own life is an extreme and awful act and it cannot be idealized," she said.

On the very same day — a day after Silman's funeral — two others attempted to set themselves alight.

The afternoon before, Akiva Mafa'i, a 45-year-old wounded war veteran had set himself on fire at a bus stop in his hometown of Yehud. He remains in critical condition.

Mafa'i was wheelchair-bound, and though not destitute, had told his close circle that he could no longer face the almost impregnable thicket of paperwork demanded by the welfare authorities. He had not worked since his injury, which took place almost 20 years ago.

His siblings said Mafa'i felt he had nowhere to turn.

Israel Police Spokesman Micky Rosenfeld said the phenomenon of self-immolations is "not a spate, maybe a wave or a trend."

Since Silman's death and Mafa'i's self-destructive act, Israelis in cities as diverse as Ofakim, a poor desert town, Be'er Sheva, Tel Aviv and the posh suburb of Petach Tikva, have attempted this particular form of suicide.

"It’s a wave, nothing more than a wave," Rosenfeld said. "Israel Police is dealing with the social protests that are taking place on a regular basis, every weekend, with the aim of making sure no public disturbances or extreme acts take place by anyone who may want to harm themselves."

"Every time we get a phone call about anyone with any intent whatsoever to hurt him or herself we respond quickly."

In Israel, the national health care system covers emotional distress but it is common to wait for months before being granted an appointment with a mental health professional.

"People in these cases just want to stop the pain,” said Dr. Shiri Daniels, Eran's director of counseling. “In a situation of crisis, you see everything in black and white, you're trapped in an emotional storm and the only way to stop the pain is to stop living."

The self-immolations, she said, represent "an illusion that some people have decided to copy. But it is not a rational decision. It is the depression speaking."

On Friday, one of the grand old men of Israeli journalism decided to attempt a response.

Eitan Haber, a veteran journalist and formerly the chief of staff for Prime Minister Yitzchak Rabin, wrote an op-ed entitled For God's Sake, Stop. It’s as if a local Walter Cronkite had decided to address the matter.

"This is a last call to the despaired who intend to commit suicide: For God’s sake, stop! Stop it!" Haber exhorts.

"Before you douse your clothes with drops of fuel, before you touch that matchbox, stop for a moment and imagine your broken parents, your shattered wife and your child, whose taste of life will always be bitter."

Dr. Daniels, from the suicide hotline, said there is something demonstrative about these acts.

“You sense the desire to create an effect,” she said. “On the other hand, you know, they just didn't think. All they want is to stop the pain and to transmit a message. It’s a psychological and sociological tempest."