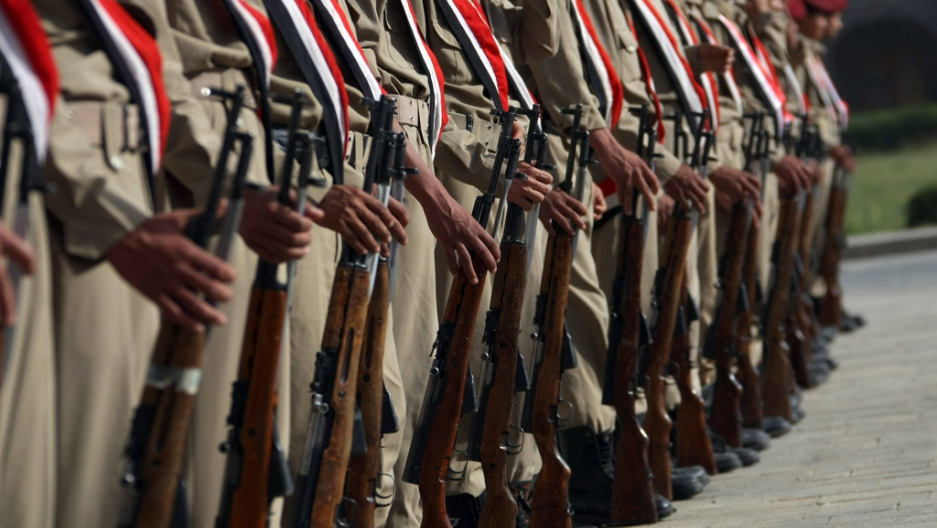 Yemeni soldiers stand at attention during the funeral procession of nine police cadets who were killed when an Al-Qaeda suicide bomber blew himself up at the entrance of a police academy, in Sanaa on July 14, 2012.
Credit: MOHAMMED HUWAIS
Share

Gunmen kidnapped an Italian embassy official today in Yemen, taking him hostage in the capital of Sanaa while others occupied the Foreign Ministry building.

A government spokesman in Italy told Agence France-Presse that the kidnapped man was working in a security role.

“The foreign ministry’s crisis unit has been activated and is co-ordinating efforts for his release,” the spokesman told AFP. “We cannot supply any more information at this time, for risk of compromising rescue efforts.”

The kidnapping occurred near the Italian embassy.

“Men came by in a car and took him by force,” a Yemeni source told Reuters.

Earlier in the day, about 100 men loyal to the former president stormed the Yemeni Interior Ministry and demanded to become police officers.

The armed tribesmen back Ali Abdullah Saleh, who relinquished power earlier this year to his vice-president, Abd-Rabbu Mansour Hadi.

The gunmen freed staff at the ministry, but continued to occupy the building for several hours.

They claim that in exchange for helping with the transition of power, they were to be enlisted into the armed forces.

“At midday, the armed tribesmen ... stormed the ministry building, took control of it and climbed onto the roof with their guns,” an official told Reuters earlier Sunday. “They refuse to leave until their demands are met.”

The Associated Press reported that the armed men also blocked the road to the airport, but later vacated the Interior Ministry.

Since 1998, tribesman and militant groups have kidnapped more than 200 foreigners in Yemen.

A member of the International Red Cross was freed earlier this month after four months, but al-Qaeda is still holding a Swiss woman taken in March.