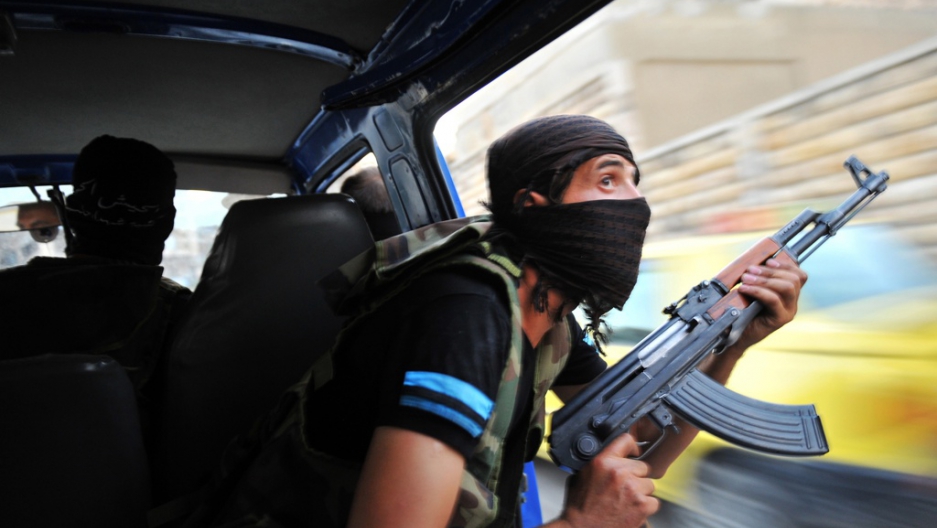 ALEPPO, Syria — The commander of the Salah Adeen Martyrs Brigade knows he’s outgunned and that many of his fighters will die in the days to come.

But like the rebels of Bengazi in Libya, Abu Abdo Bakri hopes that if the opposition consolidates control over northern Syria with a victory in the battle for Aleppo, then they might get support from Turkey and NATO for a no-fly zone.

So far, however, NATO allies have signaled very clearly that help is not on the way.

Syrian army forces have for days been gearing up for an invasion of the city, the country’s largest. And with rebel forces digging in, Aleppo’s residents fear they will be caught in between.

“I want to save my family,” Abu Qaddri, a 55-year-old shopkeeper from Aleppo’s opposition-held Sukari district told GlobalPost at the Salama border crossing with Turkey.

With his wife, two daughters and four grandchildren, Abu Qaddri was packed into one of dozens of white buses lined up waiting to leave Syria. Above the destroyed images of Syrian President Bashar al-Assad and his grim-faced father Hafez, the green-striped flag of the Syrian revolution flew. For now at least, Syria’s Bab Salama border post remains under rebel control.

Further along the divide, however, fighters with the Free Syrian Army said government troops had launched an offensive to wrest back control of the Bab al-Hawa border crossing, which rebel fighters, among them foreign Islamist militants, seized last week.

“I lived through the days when Hafez destroyed Aleppo and killed thousands of people and now his son will do the same thing,” said Abu Qaddri, referring to the regime’s war on an uprising of the Muslim Brotherhood in northern Syria that culminated in the 1982 assault on Hama, where government forces killed at least 20,000 people.

Travelling the road into Aleppo from Idlib, GlobalPost saw dozens of burned out tanks and armored vehicles, suggesting rebel fighters were attempting to target the government troops before they entered the city.

But for every crippled tank or Armored Personnel Carrier, another one rumbled by, carried by a convoy of military trucks heading to Aleppo from Homs, Hama and Idlib, as the regime masses its forces for its looming assault on the ancient city.

Today, Aleppo’s labyrinth of cobbled markets, scented with cardamom and coffee, where pearls and gold and woodwork have been bought and sold since the history books began, stand shuttered and silent. The 13th-century citadel — a UNESCO world heritage site — awaits its likely fate as a barracks against the bombs.

“All Aleppo’s businessmen want a solution and today we see this solution without President Assad,” said Abu Omar, a local factory-owner, a member of the Sunni merchant class who for so long kept Aleppo quiet, hoping their long alliance with the regime would keep them open for business.

Today, with Turkey closing its border to all trade and the roads to Iraq and Damascus too dangerous to transport goods along, Abu Omar said he knew of “dozens” of industrialists who had once paid the regime’s militias to attack protesters, but who were now paying the armed rebels of the Free Syria Army.

“They want to speed up the collapse of the regime. Sooner or later Assad is finished, but sooner is better,” he said. The switch in allegiances also followed a series of kidnappings by rebels of wealthy Aleppan businessmen and their relatives and the torching of several large factories, he said.

As regime forces begin launching bombardments on Aleppo from above, injuries from the attacks are already overwhelming city hospitals.

“We are taking in four times our capacity of patients, but what else can we do?” said a doctor at the state-run Al Razi Hospital, Aleppo’s largest. “We have hundreds of seriously wounded residents, old people, women and children.”

As in Damascus, much of the hospital staff was unable to reach work due to the attacks and the absence of public transport, said the doctor, who added that he was fast running out of blood bags.

“We asked the government to send more help but got no answer. On the contrary, the Ministry of Health has increased the price of a bag of blood from 1,200 Syrian Pound ($17) to 3,500 ($50),” he said. “I am calling all people of Aleppo to come and donate blood to help injured civilians.”

The doctor said the majority of casualties had come from Aleppo’s poor districts of Tareek al-Bab, Miser, Shaar and Bab al-Hadid.

Since the early months of the uprising, the regime has targeted hospitals, medical workers and patients it considers to be participating in the opposition.

Aleppo’s international airport is likely to be a crucial battleground in the coming days, a Syrian government official told GlobalPost.

“We have information that 1,500 opposition fighters are preparing to attack the airport,” he said. “With all roads in and out of Aleppo under opposition control the airport is the only secure way for senior officials to come to Aleppo. If we lost the airport then we have no secure channel open with Damascus.”

Abu Abdu Bakri, the Salah Adeen rebel commander, knows all too well the importance of airpower. His men have captured anti-aircraft guns, he said, and mounted them on trucks, firing at the attack helicopters to keep them at bay.

But there wasn’t much Bakri or his men could do when, earlier this week, one of Assad’s Russian MiG-23s launched the first confirmed airstrike by a warplane on an opposition neighborhood.

As he looked up at the sky to witness the attack, that NATO and Turkish support he said he was fighting for must have seemed further away than ever.