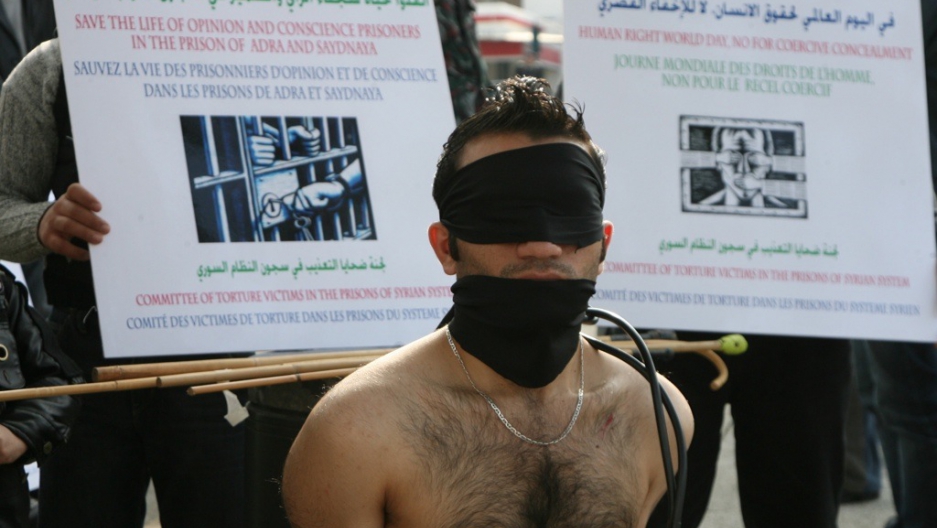 A Syrian protestor mocks being tortured during a sit-in to mark International Human Rights Day, outside the United Nations offices in downtown Beirut on December 10, 2009. The demonstrators were protesting against what they said were torture methods used in Syrian prisons.
Credit: Ramzi Haidar
Share
.syria-map iframe{ overflow:hidden; width:680px; } .syria-map{ overflow:hidden; width:680px; }

France’s League of Human Rights (LDH) and the International Federation of Human Rights (FIDH) filed a complaint against Qosmos, accusing the tech company of “complicity in acts of torture” committed by President Assad’s regime. Now a preliminary inquiry by Paris officials is underway, Reuters reported.

Patrick Baudouin of FIDH called for the release of any information "on the involvement of French companies in supplying surveillance equipment to the Syrian regime," according to expatica.com.

"Western companies must know that they cannot sell this type of equipment to authoritarian regimes without being held accountable," said Michel Tubiana of the LDH, according to AFP.

Qosmos denies the allegations, and it's possible the investigation will clear Qosmos of any wrongdoing. According to Reuters, any potential conviction will depend on number of factors. For example, is Qosmos "expected to know how their products might be used?"

A similar story appeared between the pages of WIRED Magazine's June issue. The in-depth piece, written by Matthieu Aikins, shows how another French company, Amesys, sold the Gaddafi regime "a homeland security program" that "could capture every bit of internet traffic passing through the country."

Below is a good explainer of the Amesys case from the Wall Street Journal: