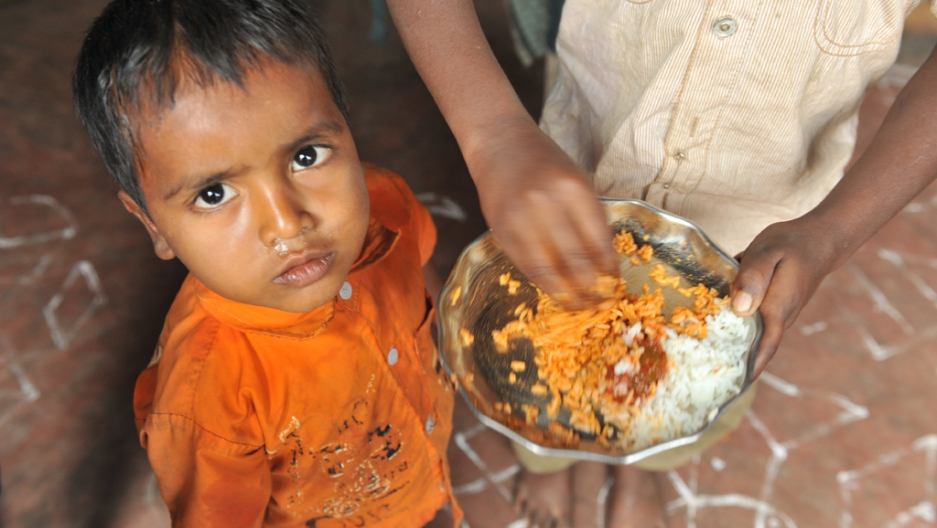 NEW DELHI, India — The prospect of a failed monsoon at home poses bigger problems for India than the spike in global prices for corn, soybeans and wheat resulting from America's worst drought since the days of the dustbowl, agriculture experts here said.

“The wisdom of India’s decision to build and maintain large grain reserves is now clear, considering the extreme volatility in international prices,” said M.S. Swaminathan, the agricultural scientist, known as the father of the green revolution, which made India self-sufficient in the late 1960s.

As GlobalPost reported earlier, India is, indeed, facing a food crisis of its own. But it has nothing to do with shortages or international prices.

Under a long-running welfare program, the government buys rice and wheat from farmers at a subsidized “minimum support price” to protect them from volatile markets. And though this grain is intended for sale to the poor at below market rates, problems with the distribution system prevent the government from releasing its supply, even as a fifth of its citizens remain undernourished. So as the rest of the world faces the specter of food riots due to skyrocketing prices, India is sitting on more than 80 million tons in reserves.

“In India there is no problem because we have a record surplus,” said farm policy analyst Devinder Sharma. “Even if production falls this year, it won't make a difference, because we are already trying to export rice.”

With millions of its own people already going hungry, however, India will not export its stockpile to take advantage of higher international prices. And the government is likely to reinstate curbs on food grain exports as the year progresses, due to the growing prospect of a failed monsoon.

India's metereological department is now forecasting below-normal rainfall, following a 22 percent shortfall over the first two months of the rainy season. The government has already set aside 900 megawatts of power and stockpiled diesel fuel to ensure farmers in the breadbasket states of Punjab, Haryana and Uttar Pradesh can pump groundwater to their fields. Local newspapers have reported that the government is soon likely to announce a subsidy on lentils — a staple protein that is not supported by the current food procurement and distribution system. And the ministry of consumer affairs has already asked regulators to take steps to stop speculation-driven trading in commodities futures.

In the meantime, some say that in India the food crisis, though perhaps not related to international price fluctuations, never really went away. Since 2008, local food prices have risen steadily, mostly due to increased demand associated with higher incomes. And the effect on the poor and lower middle class has been dramatic.

“When you have a situation in India where inflation is 10 percent and food is the biggest contributor to rising inflation ... how could you expect the government to allow exports?” said Raghavan Sampath Kumar, a Chennai-based agribusiness consultant.

“In India's political scenario, food refers to only two crops: rice and wheat. In that sense, if you ask people in India if we should have a food crisis now, they won't say yes, because that is not of much relevance to the drought in the US,” Sampath Kumar said.

If anything, the prospect of another global food crisis is likely to entrench India's opposition to integrating its agriculture sector with world commodities markets.

In 2008, food riots across the world confirmed to policymakers that India had taken the correct course in focusing on self-sufficiency — especially as the Gulf states and others began to buy up agricultural land abroad to ensure their own food supply.

And even as commodities analysts in the US and Europe argue that export restrictions from food-producing developing countries may exacerbate the spike in global prices, experts here suggest that India's continued refusal to expose its farmers to the whims and fancies of international futures traders is the country's sole defense against disaster.

India has so far held fast against pressure from other G-20 countries to force members to export their surplus food stocks, not so much because of the fear of rising prices, but because of the specter that in times of crisis enough food for its 1.2 billion people may not be available at all.

“In the 2007 food crisis, 37 countries faced food riots. All these countries were food-importing countries. Today, the situation is again that there will be food riots in many countries. But India escaped that time, and India will escape now also, because we have still not integrated our agriculture globally,” said Sharma.

“The world must draw a lesson from what India has done.”