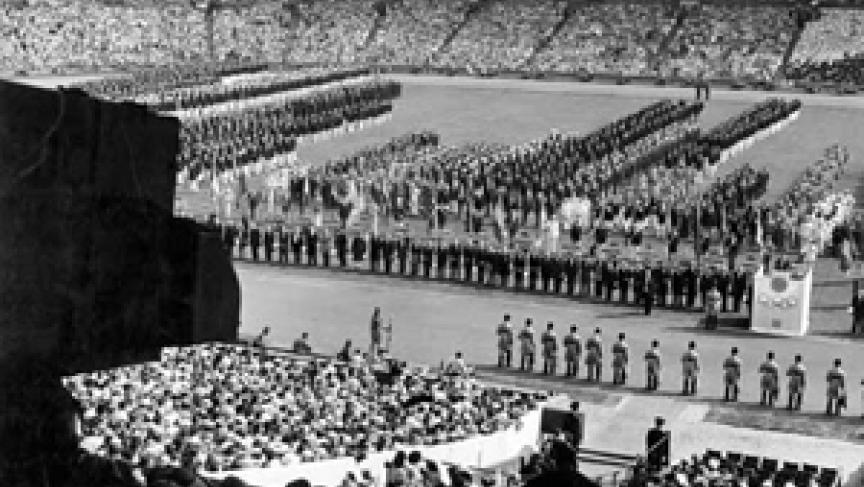 A BBC cameraman leans forward to focus on Lord Burghley, who is speaking from the Olympic rostrum during the opening ceremony of the 1948 games at the Empire Stadium, Wembley. (Photo: BBC Archive)

Share
One billion TV viewers from all over the globe are expected to watch the opening ceremony of the Olympic Games in London. It takes place on Friday, rain or shine. The show is expected to feature 20,000 performers, a cavalcade of farmyard animals and some sophisticated digital technology. But in the summer of 1948, the last time London hosted the Games, things weren't quite so fancy. Janie Hampton, a historian of the games, described the scene at London's old Wembley Stadium. "One by one the teams marched in," she said. They lined up in front of King George VI, the father of the Queen Elizabeth II, and the subject of the movie 'The King's Speech'. King George proclaimed the Games open and "a single torch bearer ran in; they sang 'God save the King; they let 7,000 pigeons go; and that was it," said Hampton, the author of the book "London Olympics, 1908 and 1948"³. The '48 Games were the first big celebration since the end of the Second World War. "There was just this wonderful feeling of hooray, we're at peace, we can just enjoy ourselves running and jumping and rowing," said Hampton. The celebratory pigeons weren't quite so happy. They were kept in boxes, waiting for the big release. On the day of the opening ceremony, a heatwave struck. Only half of the pigeons flew away because the other half were dead. There were the make-do Games. Like today, they took place in a time of austerity. After six years of war, there wasn't much in Britain to go around: everyday goods, including food, was strictly rationed. A British adult was allowed to eat 2,500 calories a day, including one egg a week. But British Olympians got more: extra bread, more eggs; the same calorific intake as a coal miner. Much of the food was donated from countries including the Netherlands and the then-Czechoslovakia. Everyone pitched in and made a virtue of the situation. The science of sports nutrition took off at the 1948 Games, too. A British government nutritionist called Dr. Magnus Pyke took samples from the world's athletes, learning—among other things—that the Mexican diet of tripe, chili and beans did not necessarily translate into medal-winning performances. The late Bob Mathias, a US Congressman from California, was just 17 when he competed in the decathlon in 1948. He recalled the javelin component going late into the evening—and the lack of illumination at the center of the field. "I remember the English officials had their flashlights that they actually shone on the foul marker," he said. "And once you threw the javelin it'd disappear in the darkness. Then all of a sudden you'd hear it thud at the other end and see a bunch of flashlights running out to where the javelin stuck." Mathias won gold in London. He and the rest of the American team faced competition from 58 other countries in 1948. More than 200 nations are taking part this year. Contemporary Olympic Games are massive, complex enterprises: for the organizers there can be no muddling through or making do, only grand achievement or failure. Still certain notions persist, such as a warm welcome. In 1948, the then-British Prime Minister Clement Attlee, broadcast a message on the eve of the Games. "We wish to do all we can to make the visits of our friends from other countries as happy as possible," Attlee declared. "Here, then, are all good wishes to competitors and spectators alike for a successful Olympic Games." That down-to-earth tone will likely be in evidence on Friday at the Opening ceremony. London in 2012 isn't able to spend on showmanship what Beijing did four years ago. Perhaps the lesson of 1948 is that it doesn't need to.